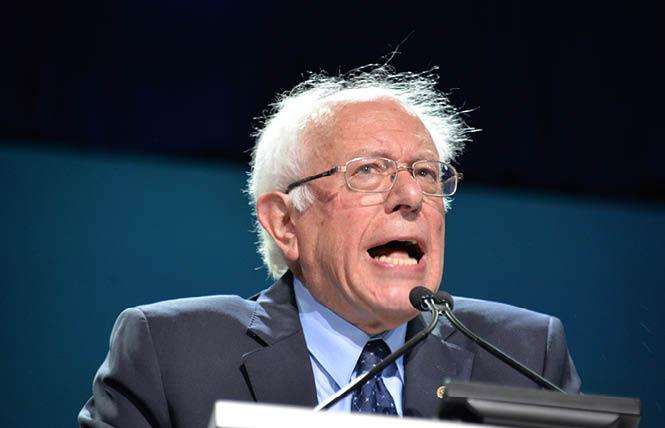 Nevada caucus vote counters may not be as bad as those in Iowa but, as of Monday morning, they were still scrambling to report the results of the Democratic caucus voting that ended Saturday afternoon. And "material irregularities" in the Nevada vote count prompted the campaign of gay candidate Pete Buttigieg to question the process and ask the Nevada State Democratic Party to release all data on the voting and "explain anomalies" in the data.

With 88% of precincts reporting in Nevada, reports indicate that Senator Bernie Sanders of Vermont won 40.73% of the state party's county convention delegates. He was followed by former Vice President Joseph R. Biden Jr. with 19.69%, Buttigieg with 17.14%, Senator Elizabeth Warren of Massachusetts with 11.21%, Senator Amy Klobuchar of Minnesota with 6.75%, billionaire businessman Tom Steyer with 4.05%, and four other candidates with 0.11% altogether. Another 0.36% of voters did not commit to a candidate.

Although reporting is still incomplete, the results appear to secure Sanders as the winner. Buttigieg's aim seems mostly to challenge Biden for second place.

The February 22 letter from the Buttigieg campaign reports the campaign received more than 200 "incident reports" from around the state, alleging such things as failure to properly count votes cast through early voting opportunities or allocating such votes to the wrong candidate. The letter asks the party to release all early voting data and correct any errors in how those votes were allocated. The letter does not file a formal challenge of the results.

Both Buttigieg and Sanders filed complaints against the counting in Iowa, asking that tallies at 95 out of almost 1,800 precincts be re-canvassed.

The concerns and delay in final vote results in Nevada are now playing out in front of a political backdrop in which intelligence officials have warned Sanders that Russia is making efforts to help him win the Democratic nomination and help President Donald Trump to get reelected. During last week's debate, Sanders speculated that some of the hostile messages on social media being attributed to "Bernie Bros" might be foreign interference. (Sanders, a self-described Democratic socialist and independent, was briefed on Russian interference a month ago, according to published reports.)

The current delegate count, including Nevada's, shows Sanders in the lead with 34, Buttigieg in second with 23, Warren and Biden tied in third with eight each, and Klobuchar in fifth with seven. To win the party's nomination, a candidate must secure 1,991 delegates.

Buttigieg
After the Nevada voting was done, Buttigieg rushed to Denver for a town hall meeting, hoping to win support there for the increasingly crucial Super Tuesday voting March 3. At the end of the meeting, the local moderator called a 9-year-old boy named Zach to the stage to ask his question.

The moderator read the question: "Thank you for being so brave. Would you help me tell the world I'm gay, too? I want to be brave like you."

"Wow," said Buttigieg, and the audience erupted into cheers around the large crowded meeting room, and started chanting "Love means Love," as Zach approached the stage. They shook hands and Zach gave Buttigieg a bracelet, which Buttigieg put on.

"Well, I don't think you need advice from me on bravery," said Buttigieg to Zach, as the crowd cheered again. "You seem pretty strong. To see you — it took me a long time to figure out how to tell even my best friend I was gay, let alone go out there and tell the world. And to see you willing to come to terms with who you are in a room full of thousands of people who've never met, that's really something.

"So, let me tell you a couple of things that might be helpful," Buttigieg added. "The first this is that it won't always be easy. But it's OK, because you know who you are. And that's really important because, when you know who you are, you'll have a center of gravity that can hold you together when there's a lot of chaos happening around you.

"And the second thing I want you to know is that you'll never know who's taking their lead from you — who's watching you and deciding that they can be braver because you have been brave," he continued. "When I was trying to figure out who I was, I was afraid that who I was meant I could never make a difference. And what wound up happening instead is that it's a huge part of the difference I get to make. I never could have seen that coming. And you'll never know who's like — who you might be affecting right now just by standing here. There's a lot of power in that. And the last thing I want you to know, even if I can't promise it will always be easy, is I promise I'll going to be rooting for you and I think you there's a whole lot of people here who are going to rooting for you."

CNN will host its next round of town halls this week, ahead of the South Carolina primary February 29. CBS will host Tuesday night's debate in Charleston.

CNN's Monday night forum will include one-hour segments with each of Sanders, Buttigieg, and Steyer, starting at 6 p.m. Pacific time. On Wednesday night, the town halls will include former New York City mayor Michael Bloomberg, Biden, Klobuchar, and Warren, and start at 4 p.m. Pacific