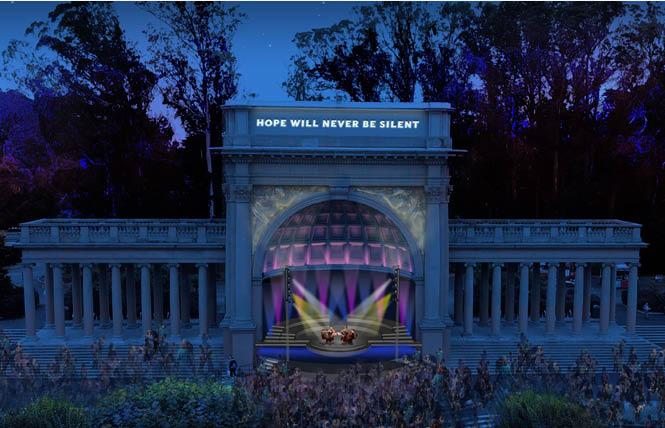 The late gay supervisor Harvey Milk's message of hope could soon be shining in San Francisco's Golden Gate Park as part of the city's plans to celebrate the green space's 150th anniversary.

Under a proposal that will be heard by the city's Recreation and Parks Commission Thursday, February 6, a temporary light installation of the words "Hope will never be silent" would be installed along the top center of the Music Concourse Bandshell in a typeface inspired by historical inscriptions found on the nearby water fountains.

Also known as the Spreckles Temple of Music, the bandshell structure is at the western edge of the Music Concourse, which sits above the underground parking garage that serves visitors to the California Academy of Sciences, the de Young Museum, and Japanese Tea Garden. It was built in 1900, survived the 1906 earthquake, has been renovated over the years, and is the official home to the Golden Gate Park Band, which performs on Sunday's in the park during the summer months.

The bandshell is now slated to receive enhancements this year that include the installation of re-configured risers that will open space on the stage to make it more usable for performances and the temporary installation of lighting and a state-of-the-art speaker system. Leading the project is Illuminate, the arts nonprofit that installed the artistic lighting on the Bay Bridge and the façade of Golden Gate Park's Conservatory of Flowers.

If approved, the art piece would be installed for two years and be illuminated during the evenings, though Ben Davis, Illuminate's founder and chief visionary officer, told the Bay Area Reporter that he hoped the public would embrace seeing it be a permanent addition to the bandshell.

"If these words resonate, I hope there would be a healthy conversation about them joining the history of Golden Gate Park," said Davis.

The tribute to Milk would be the first to honor of an LGBT figure in the park outside of the National AIDS Memorial Grove. None of the statuary present throughout the park currently honors an LGBT figure, according to rec and park officials.

He had looked at a wide array of quotes about San Francisco and Golden Gate Park and from people with ties to the city, but it was the words attributed to Milk that resonated most, Davis told the B.A.R.

"This quote from Milk moves beyond the LGBTQ community and beyond human rights into overall equity and planetary equity," said Davis. "It is a meaningful quote for the time we are in and the climate crisis. It is a galvanizing quote for everyone to step up. It brings us from intention to action."

In November 2017 Illuminate installed a similar lighted art piece with the same quote on the mantel of the commercial building overlooking the plaza that bears Milk's name above the Castro Muni station. It used white neon lettering to spell out Milk's message that hope would never be silenced.

It was part of the ceremonies that fall commemorating the 40th anniversary of Milk's historic 1977 election as the first out gay supervisor in San Francisco and the first openly LGBT elected official in California. Tragically, a year after being elected to the Board of Supervisor's District 5 seat, which back then covered the Castro and the Haight, Milk was assassinated along with then-mayor George Moscone inside City Hall by disgruntled former supervisor Dan White the morning of November 27, 1978.

It is unclear when Milk first said the "Hope will never be silent" line, though it is widely attributed to him. He often invoked the theme of hope in his speeches, most notably in the speech he gave on June 24, 1977 inside the San Francisco Gay Community Center at the kick-off for his third supervisor campaign.

Milk said of LGBT youth in particular, "and you have to give them hope. Hope for a better world. Hope for a better tomorrow. Hope for a place to go if the pressures at home are too great. Hope that all will be alright." His address that day became known as "The Hope Speech."

Davis told the B.A.R., "I am not quite sure the source of that quote. To me, it almost doesn't matter anymore. It captures the essence of who he was."

The total cost for the bandshell project is $800,000 and it is being paid for by private funds. Davis said Illuminate still needs to raise another $150,000, which he noted was fitting in light of the park's anniversary year.

The bandshell improvements will support a community arts program to launch on Saturday, April 4, as part of a free community day celebration throughout the park's 1,017 acres that will feature more than 150 free events and activities.

"These improvements will both dramatically enhance the bandshell as a performance space and make it far more accessible to smaller arts and community groups who would not have the budget to bring in their own sound and lighting systems for performances," stated Phil Ginsburg, general manager of the San Francisco Recreation and Park Department. "We are excited to bring music back to the bandshell and launch a new program that will provide new opportunities for every neighborhood in the city to celebrate Golden Gate Park."

The Music Concourse and Bandshell will serve as the location for the official start for Community Day, with a special birthday event that will include the first musical performance from the newly enhance stage of the bandshell.

The new community arts program will run two weekends a month in the afternoon and will be funded with grants provided through the San Francisco Parks Alliance and the Golden Gate Park 150th Committee.

"These enhancements will strengthen the quality of the programs being offered to visitors of Golden Gate Park, while preserving and celebrating the historic and cultural relevance of the Bandshell," stated Drew Becher, a gay man who is CEO of San Francisco Parks Alliance. "Golden Gate Park is fondly known as 'everybody's park' and this new community arts program will open the door for more visitors to enjoy all that it has to offer."

Visit www.goldengatepark150.com for a guide to the special events, programming, exhibitions, history, amazing stories and things to do in the park. Specific information about the April 4 Community Day can also be found on the website.