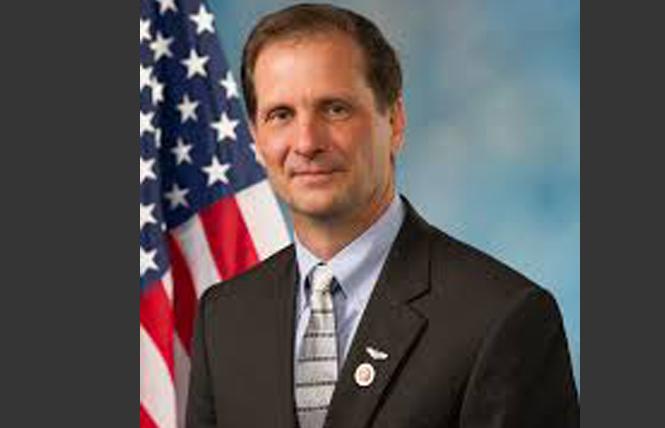 Last week Congressman Chris Stewart (R-Utah) introduced the Fairness for All Act as an alternative to the Equality Act, which passed the House of Representatives in May. But make no mistake, the Fairness for All Act isn't fair or for everyone. In fact, it would codify a so-called "license to discriminate" that LGBT rights groups have fought ever since Donald Trump became president and his administration began promising rightwing religious bigots the freedom to act unfairly.

The Fairness for All Act would provide federal protections for LGBTQ people in housing, education, and public accommodations; but it simultaneously carves out compliance exemptions for churches and religious organizations, including nonprofits like church-affiliated adoption agencies. That's the problem: it allows people to act on their prejudices balanced against limited equal treatment. You aren't afforded equal treatment to commercial services, accommodations or access if someone can deny you by self-exempting based on their religious objection. That's discrimination.

While it may sound good, in practice the religious exemption is a deal-killer, as Pride at Work Executive Director Jerame Davis said in a news release. "The religious exemptions carved out in this bill make it a non-starter for LGBTQ working people," Davis stated. "If I were cynical, I would see this misguided bill as just a deflection to draw attention and support away from the Equality Act, the only bill currently before Congress that would truly give LGBTQ people the equality they deserve."

The Equality Act would amend the 1964 Civil Rights Act to include sexual orientation and gender identity for protection — it passed in the House May 17 on a bipartisan vote of 236-173 and would provide legal rights to LGBTQ people who experience discrimination in daily life. Tellingly, the White House opposes the bill, which is unlikely to see a vote in a Senate that is controlled by Republicans. But it's difficult to see how the Fairness for All Act would pass muster with Republicans, except for the provisions granting religious exemptions.

Importantly, the Fairness for All Act would erode protections that already exist for people based on race, sex, and religion, potentially rolling back rights that have been on the books for decades. It would expand the number of places and situations in which lawful discrimination could occur, according to a joint statement by the Human Rights Campaign, the NAACP, Lambda Legal Defense and Education Fund, and the American Civil Liberties Union.

"At the same time, it would introduce new, problematic provisions purportedly seeking to prohibit discrimination based on sex, sexual orientation, and gender identity with broad exemptions, essentially licensing discrimination against LGBTQ people and women," the groups stated. "Communities of color, who suffer from disproportionately higher rates of discrimination and harassment, would be especially vulnerable to harm under these broad exemptions. Our nation's existing civil rights framework already strikes the right balance when it comes to the government's interest in protecting religious freedom and advancing nondiscrimination, and it is wrong to put into law a different system of protections for LGBTQ people and their families."

Not all LGBTQ organizations have rejected the plan. In fact, the Transgender People of Color Coalition is taking a wait-and-see approach. "Today's endorsement of federal anti-discrimination protections by conservative religious organizations marks a historic moment in the struggle for full equality for LGBTQ people," Executive Director Kylar Broadus said in a statement. "Especially for LGBTQ people of color living in conservative communities, building bridges across political and religious divides is essential to securing the basic legal protections that our community so urgently needs."

While Broadus has a point about crossing divides, it's certain that the Fairness for All Act is not the way to achieve basic legal protections for LGBTQs. Religious belief itself is open to wide interpretation so fails to provide a clear or consistent criteria or application.

Even conservatives don't seem enamored with the proposed bill. Andrea Jones, with the Richard and Helen DeVos Center for Religion & Civil Society, which is part of the Heritage Foundation, said the Fairness for All Act actually undermines underlying issues because it treats sexual orientation and gender identity as illegal discrimination, which the foundation doesn't agree with. "By adding the subjective, mutable categories of sexual orientation and gender identity to this law, the federal government would in essence declare disagreement on conduct or self-perception to be equivalent to racist bigotry, and no amount of religious exemptions can fix this fatal flaw in the Fairness for All Act," Jones wrote.

While we disagree with Jones' argument that homophobia and racism can't be equally despicable, we agree the act is unacceptable.

The bottom line is that everyone should be treated equally and fairly, free from arbitrary discrimination, religious or otherwise. By trying to split the baby, Stewart's Fairness for All Act does not provide a viable solution and pleases no one.