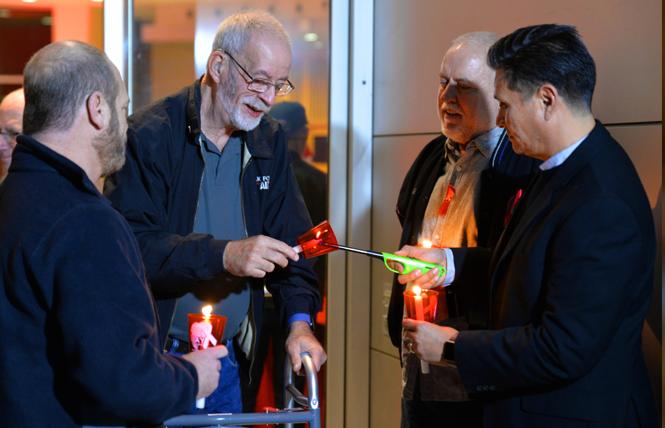 South Bay residents were also able to view 79 pieces of the AIDS Memorial Quilt on display for the day and attend a memorial and candlelight vigil.

About 40 people came out to honor those who died during the epidemic and to look toward the future when AIDS is a thing of the past.

They also were determined to support those who were still living with the disease.

"It is important to commemorate World AIDS Day or remember those who we lost to AIDS because our work is not yet done. We have a ways to go," said Dr. George Han, a gay man who's deputy health officer for the Santa Clara County Public Health Department.

"By remembering those who we've lost, it helps motivate us. It's our reason why we are doing the work that we are doing," he continued.

Currently, 3,419 people are known to be living with HIV/AIDS in Santa Clara County. Last year, the county saw 167 new HIV cases. Of those new cases, 68% were gay and bisexual men and 51% were Latino, said Han.

The good news is that 70% of the county's residents living with HIV/AIDS have viral loads that are suppressed or undetectable, he added.

Seventeen people died from AIDS in the county last year, according to the county's World AIDS Day website.

Beloved
San Jose city officials spoke about the state of the disease in the county. Two gay men — Dennis Pitt-Clute and Rodney "Kam" Duque — spoke about their personal experiences living with HIV/AIDS.

"I'm actually here as a family member who lost a very dear loved one," said Foley. "My brother, Tim, died of AIDS in 1996. That's a long time ago but there is not a day that goes by that I don't think about him.

"When I lost him, I lost a part of my heart and soul," Foley added, explaining that she was pregnant at the time he passed away.

To honor her late brother, Foley named her daughter Katelin Timothy Foley, bestowing her brother's name as her daughter's middle name, she said.

"She is a lot like him in many, many ways. He was dramatic. She is dramatic," she said as the audience laughed. He would have been proud to know that Katelin identifies as a bisexual woman, Foley added.

However, there was a much darker side to the story, which was how doctors treated Foley's brother. He was tested without his knowledge and learned that he was HIV-positive. After that, he became untouchable to the extent that a hospital once "put him in a taxi and dropped him on a curb near his apartment," she said.

Foley urged everyone in the rotunda to speak out when they see HIV/AIDS patients being disrespected.

"We need to stand up and protect everyone in our community to show them how much we love them and embrace them," she said.

So many lost
Pitt-Clute, a 70-year-old gay man, recalled the time at the beginning of the epidemic.

He contracted the disease in the early 1980s, as did his brother, when it was known as GRID (gay-related immune deficiency).

He described the pain of losing so many people, including his brother and his brother's partner, and recalled when the Bay Area Reporter was filled with obituaries of gay men dying of AIDS. He recalled that doctors at the time were completely covered to the point that he couldn't tell who was caring for him.

He survived. He doesn't know why, but he survived.

"I'm still here. I still fight AIDS. I don't have HIV, I have AIDS," said Pitt-Clute, who works giving out condoms at Santa Clara Valley Medical Center's Partners in AIDS Care and Education program, known as PACE, reminding young people that they don't want HIV and that it is preventable.

Pitt-Clute said that he is grateful for all of the advances in HIV/AIDS treatment, but it upsets him when he sees young people coming into the clinic.

"It angers me when I see people putting themselves at risk because it just isn't worth it," he said. He takes 31 pills a day and said the disease affects "every part of my life every day."

"It makes me want to shake them, 'What were you thinking?'" he said. "There is no man or woman worth this."

Ending AIDS
Han, who worked in Africa's first pediatric HIV/AIDS clinic in Botswana and later at the Centers for Disease Control and Prevention before coming to Santa Clara County's health department in 2014, believes that the disease can be eradicated.

To stop AIDS means preventing it by overcoming stigma and treating those who have it to get their viral loads to undetectable levels where the disease can't be spread. That's known as undetectable equals untransmittable, or U=U.

That takes having LGBT people at the table in discussions about HIV/AIDS. He pointed out that the LGBT community is "one of the key groups that needs to be a part of the conversation."

"We know that LGBTQ people are at a higher risk for getting HIV. So, any conversation about HIV that doesn't include them is not a full conversation," he said, responding to the B.A.R's question about President Donald Trump again not including the LGBT community in his remarks on World AIDS Day.

The stiffest challenges he faces are overcoming fear and stigma. Other difficulties are education about HIV/AIDS and access to prevention and treatment options for the disease.

It's "still hard for people to have hard conversations about sex, about HIV, with their health care partners and their loved ones," Han said. "There's something that's hard about having to open up yourself to see a doctor."

To help lower people's walls around HIV/AIDS, Han pointed out that more than 70% of the health department's 450 employees have undergone training to better understand the health inequities that affect LGBT patients.

The health department is also working with community partners (https://www.sccgov.org/sites/phd/services/hiv-resources/Pages/partners-services.aspx), such as the Watergarden, San Jose's gay bathhouse, and the Billy DeFrank LGBTQ Community Center, bringing testing and treatment to where at-risk communities gather.

There is also a new opt-out HIV testing system. Patients have to inform their doctor they don't want to be tested for HIV or they will automatically be tested.

Han is also working to ensure access to affordable medication. He applauded California Governor Gavin Newsom for signing Senate Bill 159, which allows pharmacies to provide up to two month's of PrEP without a prescription. The bill was co-authored by gay state Senator Scott Wiener (D-San Francisco) and gay Assemblyman Todd Gloria (D-San Diego)

"I think that all of us here believe that health care is a human right," said Han.

Han is glad to see city leaders and community organizations working together toward getting to zero, which aims to dramatically reduce HIV transmissions by getting patients into early treatment and eliminating stigma.