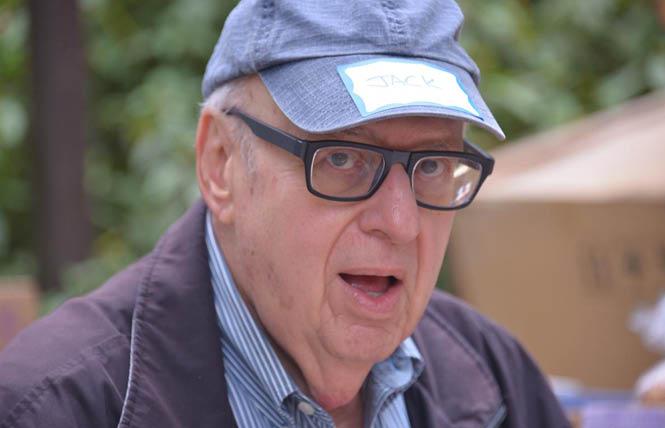 Jack Porter, a gay man who was one of the original board members of the National AIDS Memorial Grove and a longtime volunteer, died Friday, November 15. He was 81.

"Jack Porter, for nearly three decades, was the beating heart of the grove," Cunningham said in a statement. "Jack will forever be part of our beloved grove. His passion, love, and commitment to not just the memorial, but to the many people he met during his countless days within its warm embrace, will never be able to be replaced."

Cunningham said that Porter was a historian of the grove, which is located in San Francisco's Golden Gate Park and is the country's only federally recognized AIDS memorial. Porter visited several times a week and helped care for the grove and its Circle of Friends, where he would collect mementos left by others in the memory of loved ones lost to HIV and AIDS.

Cunningham said that Mr. Porter's collection will remain with the grove and be displayed each World AIDS Day.

"Over these past years, Jack's dedication to the memorial was also a testament to his love for his former partner, Stephen Marcus, who left us many years ago," Cunningham stated. "Finally, Jack and Stephen are together again and it gives us great peace knowing that."

Cunningham told the B.A.R. that Marcus' adult children were with Mr. Porter when he died. Marcus was a landscape architect.

In an undated piece on the grove's website, Mr. Porter wrote about Marcus, and how the grove got started. Marcus, 49, died of AIDS-related complications in December 1989. The couple met in 1982 and were together for eight years.

Mr. Porter noted that he and Marcus' names were inscribed in the Circle of Friends.

"Stephen was on the board of the local tree-planting organization, Friends of the Urban Forest, that was founded by his good friend, Isabel Wade," Mr. Porter wrote. "With so many in the city dying from this new disease, Stephen and a small group that included Alice Russell-Shapiro, Isabel Wade, David Linger, Nancy McNally, David Fox, and Jim Hormel, among others, envisioned a place in Golden Gate Park that they could turn into a garden as a place to remember and honor all lives touched by AIDS."

"My family and I are deeply saddened by the passing of our dear friend, Jack Porter," Pelosi stated. "Jack and his late, beloved partner, Stephen Marcus, were instrumental in establishing the National AIDS Memorial Grove in San Francisco's Golden Gate Park, and Jack spent many years dedicated to protecting and preserving this beautiful place of peace and remembrance as a longtime volunteer."

Pelosi said that Mr. Porter, like so many of his generation, came out later in life and that he had wanted a place for the LGBTQ community, friends, and family, to honor their loved ones who "died in the shadows."

"Jack's tireless work and volunteerism helped transform a former swamp into sacred ground where the community can gather to remember those lost to HIV/AIDS," Pelosi stated. "Thanks to the committed efforts of Jack and countless others, for over 25 years, the AIDS Memorial Grove has been a sanctuary to mourn as well as a public space to bring people together in the fight for LGBTQ rights, including marriage equality."

Pelosi added that over the years she and family members have spent time pulling weeds at the grove and planting trees to help maintain the 10-acre site.

According to his obituary, Mr. Porter was born August 9, 1938 in Fort Dodge, Iowa, the son of Gretchen Smith and Thomas B. Porter. He graduated in business and marketing from the University of Iowa in 1960, and shortly afterward joined the U.S. Army, serving in Germany, Australia, and Eritrea. Mr. Porter moved to the San Francisco area in the 1970s and for many years worked for Lockheed Martin in the South Bay.

In 2007, the board of the AIDS grove rejected a controversial "Living Memorial" design element that would have seen about 90 blackened steel poles, a new entrance, and a sidewalk overlook to the memorial. It had been was proposed by New York architects Chloe Town and Janette Kim.

In what was described as a close vote, the board ultimately decided the organization didn't have the capacity to raise the estimated $6 million for the project. People familiar with the decision declined to publicize the vote tally, the B.A.R. reported at the time.

Mr. Porter eventually resigned from the board over the design issue. One of the arguments in favor of the design was to bring more attention to the grove.

"AIDS is not over. We need to let the world know the grove is here," he told the B.A.R. at the time.

"Jack was the very soul of the AIDS Memorial Grove," Juster wrote in a Facebook message, "His kindness and generosity exemplified the spirit of volunteerism"

A memorial service for Mr. Porter will be held Sunday, December 1 — World AIDS Day — from 5 to 7 p.m. at the AIDS grove, located in Golden Gate Park at Nancy Pelosi Drive and Bowling Green Drive. Mr. Porter's writing about he and Marcus can be read at https://aidsmemorial.org/stories-stephen-marcus/