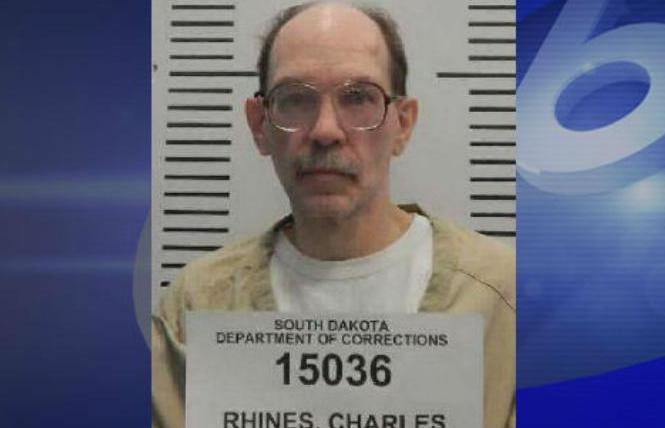 A man convicted of murder was executed by lethal injection in South Dakota November 4, after the U.S. Supreme Court refused to consider evidence that state court jurors had sentenced the man to death because they knew he was gay and thought he would enjoy life in prison.

Lambda Legal Defense and Education Fund decried the execution, saying the courts should have examined the evidence that the executed man, Charles Rhines "was sentenced to death because he was a gay man." But South Dakota Attorney General Jason Ravnsborg wrote, in a brief to the Supreme Court, that while "homosexual citizens of this and many other countries have suffered inexcusable indignities by societal institutions," the death sentence imposed for his crime was "not such an instance."

Rhines, 63, was convicted of murdering 22-year-old Donnivan Schaeffer in 1992, while attempting to rob a Rapid City doughnut shop where they both had worked. Rhines confessed to the crime to police multiple times, and the jury heard recordings of these confessions before being asked to determine his sentence. During jury selection and the trial, testimony established that Rhines was in a same-sex relationship with another man.

Under South Dakota law, a person convicted of first-degree murder can be given the death penalty if the offense was "outrageously or wantonly vile, horrible, or inhuman in that it involved torture, depravity of mind, or an aggravated battery to the victim."

"The jurors uniformly reported that Rhines' chilling laughter during his confession while comparing young Schaeffer's death spasms to a decapitated chicken running around a barnyard, not his sexual orientation, was what drove them to impose a death sentence," wrote Ravnsborg in the brief. "... Rhines' disdain for the lives and dignity of other humans, not his sexual orientation (or cognitive processing), is why the jury sentenced him to death."

The Supreme Court's denial of Rhines' appeal was the last of several appeals by Rhines' attorneys to the high court. Ravnsborg noted that Rhines' attorneys did not raise the anti-gay bias claim until recently. A lower court of appeals judge said Rhines' attorneys questioned prospective jurors prior to the sentencing trial about their feelings regarding homosexuality. One juror said she thought it was a sin but said it would not affect her decision-making but Rhines' attorneys, noted the judge, "did not seek to remove this juror from the panel."

According to the Capital Journal newspaper, Rhines' attorneys did not learn until the third appeal that the jury had discussed among themselves that Rhines was gay and that a life sentence in prison might be enjoyable to him.

Signs of bias, documents show
According to court documents, one juror said the jury "knew that [Rhines] was a homosexual and thought that he shouldn't be able to spend his life with men in prison." They also indicated that one juror referred to Rhines as an "SOB queer."

A written statement by another juror quoted a fellow juror as making a comment that "if he's gay, we'd be sending him where he wants to go ..." And a federal investigator said a third juror indicated the jury had "lots of discussion of homosexuality. There was a lot of disgust."

"It's evident that he was sentenced to death because he was a gay man," said Rice November 4. "We are deeply troubled that the court chose not to review his case today when it is clear that the constitutional right to a fair trial must include whether jury deliberations involved bias."

Lambda Legal and several other LGBT legal groups joined a brief in support of Rhines' last appeal, arguing that the jury's bias violated the convicted man's Sixth Amendment right to an impartial jury. They said an accused person has a right to an impartial jury where bias based on sexual orientation could "play no part in jury decision-making, and especially in the determination of whether a person lives or dies." In such cases, they said, "litigants must be allowed to present evidence of bias based on sexual orientation to the court."

"The history of discrimination against lesbian, gay, and bisexual people in nearly every aspect of life illustrates the need to safeguard against sexual orientation bias in our nation's judicial system," said the brief. The groups urged the Supreme Court to allow the trial court to take a look at the jury deliberations in Rhines' trial and sentencing because there was "disturbing evidence that, if credited, shows the jury sentenced Mr. Rhines to death in significant part because he is gay. Yet Mr. Rhines has never been allowed to present this evidence to a court."

The groups pointed to a Supreme Court decision in 2017, Peña-Rodriguez v. Colorado. In that case, the Supreme Court said that, when there is clear evidence that a juror relied on racial stereotypes or animus with regard to a defendant, a trial court should be able to review jury deliberations.

In its order denying Rhines' last appeal, the Supreme Court said nothing. But the order included a statement by Justice Sonia Sotomayor to note that, while she agreed with the denial of this appeal, she wanted to make clear that the denial "does not represent an endorsement of the lower courts' opinions." Sotomayor noted, among other things, that attorneys for Rhines believed Rhines suffered traumatic events earlier in his life.

Court briefs indicated Rhines said he was molested by a neighbor boy when he was 5 years old and experienced a "struggle with his sexual identity and how to live life as a gay man in a less than tolerant environment." He also said he served in the U.S. Army in Korea when two American soldiers were axed to death there." Military records indicated he suffered trauma-related symptoms.

Last words
Other briefs argued that Rhines was "not a sympathetic figure."

According to a transcript of the execution, provided by the South Dakota Department of Corrections, prison warden Darin Young asked Rhines, "Do you have any last words?"

According to a statement from Ravnsborg, the lethal injection was administered at 7:35 p.m. The coroner pronounced Rhines dead at 7:39. Ravnsborg's remarks recalled Rhines' victim as a "kind and a hard worker, prepared to start a career with a telephone installation company" and who was engaged to be married.

Rhines has been on death row since 1993, when a jury found him guilty of stabbing Schaeffer to death during the robbery attempt. Various descriptions of the crime noted that Rhines stabbed Schaeffer in the stomach and chest, tied him up in a storeroom, and then stabbed him to death in the head. The jury heard an audiotape of Rhines laughing as he described the murder to police officers.
Charles Rhines. Photo: Courtesy South Dakota Dept. of Corrections