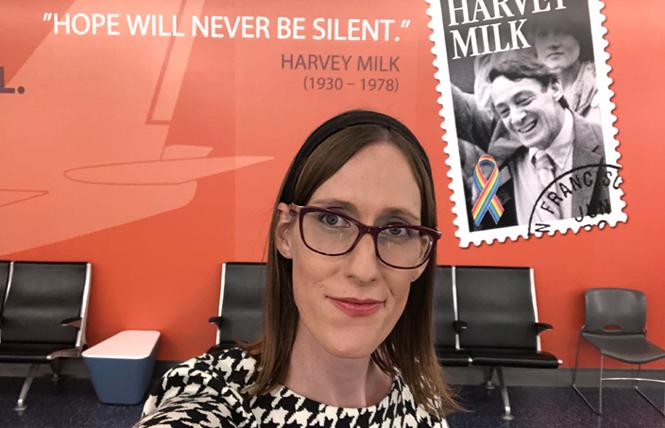 Long lines, layovers, tight quarters, and overpriced fast food make flying a less than enjoyable experience to most travelers. Unfortunately, for transgender individuals, those are not the only things to be concerned about. The Transportation Security Administration has been known to seemingly target transgender people while traveling. When it has someone on its radar, it often ends with the traveler feeling publicly humiliated, molested, and dehumanized.

Every transition is unique, but for most transgender people there will be a point where they legally change their name, gender marker, and update their identification. Often, people will go by their new name and gender marker even though they have not yet changed it legally. During this transition time their name, gender marker, and picture ID won't particularly match. If this is the case, then it may be the first point that a transgender traveler will come face to face with someone from TSA. The TSA agent will attempt to verify that the person holding the boarding pass is indeed the same person on their ID. This can be resolved through a quick chat and providing a few documents to prove their identity.

Now comes the moment that every transgender traveler dreads: walking through the TSA scanners. The scanner only has two options: female or male. The TSA worker that controls the scanner will look at the way a person presents themself and choose one of those two options. If the scanner's software sees anything that would present further inspection, then an alarm will go off. At this point, a TSA agent will pat the person down in the area of interest, which is typically the chest and/or their genitals. TSA guidelines state that the agent who will pat someone down will be the same gender as the person in question presents. Knowing that the scanner is only equipped to recognize female and male, it is unclear who would pat them down if the person in question is nonbinary or gender-nonconforming.

I am one of the many transgender individuals who dread flying because of the treatment that I have received by TSA. It seems that no matter what I do, TSA always finds a reason to question me and pat me down. It started when I began to transition, it happened during my transition, and it continued on after transition. This, too, is common a story in the transgender community.

Recently I was flying to San Francisco for a public speaking engagement. I put my carry-on bag on the conveyor belt and went through the scanner. I was asked to step aside. They told me that I would receive a pat down and then asked me if I wanted to do it publicly or privately. Like always, I chose publicly because I am terrified to find out what would happen to me behind closed doors. A female agent said that something about my bra was suspicious and she needed pat down my chest. Another female agent said that something looked suspicious near my genitals as well and that I will need further inspection. After my breasts where patted down, she proceeded to put her hands on, and in, my panties. Then she swabbed my hands to check them for suspicious chemicals. During the pat down, my bag came under suspicion. I was told that it needed to be looked through as well. So there I was in the middle of the airport with a stranger publicly touching me, a person watching me be patted down, all while someone else is going through my bag. This left one TSA agent to care for everyone else in line and seemingly 20-30 people passed through the gate unscathed while I had to endure this ordeal. I made my way to the theater and delivered my speech. After the event, I went back to San Francisco International Airport to return home.

On my return flight I had a similar, yet slightly less invasive, experience. When it was over, I collected my belongings and what was left of my dignity and started down the hall to my terminal. I looked up, and on the wall was a tribute to Harvey Milk, with a quote of his that read "Hope will never be silent." "I hope that I never have to go through that again," I thought to myself. Having several more flights planned in the weeks ahead, the question was: How can I avoid getting harassed and publicly humiliated by TSA? My wife is an avid traveler because of her work. She suggested that I get TSA Pre. It costs about $85 for five years, and the perks include skipping long lines; not needing to take belts, jackets, or shoes off; and keeping laptops and liquids in carry-on bags. I made an appointment, brought the necessary documentation, got fingerprinted, and paid the fee. A few days later, I was approved and given my Known Traveler Number just in time for my next flight.

Now I am at the airport again, this time flying into Baltimore. Once again, I am nervous that I would undergo the same situation that I normally go through. I get in the TSA precheck line, show them my Known Traveler Number, and breeze right through. No one felt the need to ask me any questions about my identity, no one needed to look in my bag, no alarms went off, and no one needed to pat me down. On my return flight from Baltimore, I was pleasantly surprised to find a similar experience.

I had hoped that I could find a way to get through that line without being singled out. Since having TSA Pre I have taken five flights without any problems. I thought about that quote from Milk that I read at the San Francisco airport. It made me want to take my hope and share it with others. I am not promising that TSA Pre will get you through that line without complications, but I can tell you that I have had pleasant experiences ever since. Also, ensure that you have any documents easily accessible that will help quickly identify you. If one of your friends or loved ones is transgender, purchasing TSA Pre for them could be a way to show that you care about their circumstances.

Delia Danae Rawdon is an out and visible transgender actress and performance artist living in Los Angeles with her beautiful wife and three amazing children. She can be seen in hit shows including the "Transparent" musical finale, the LGBT episode of "Drunk History," and the 2018 award-winning short "Someone You Know."