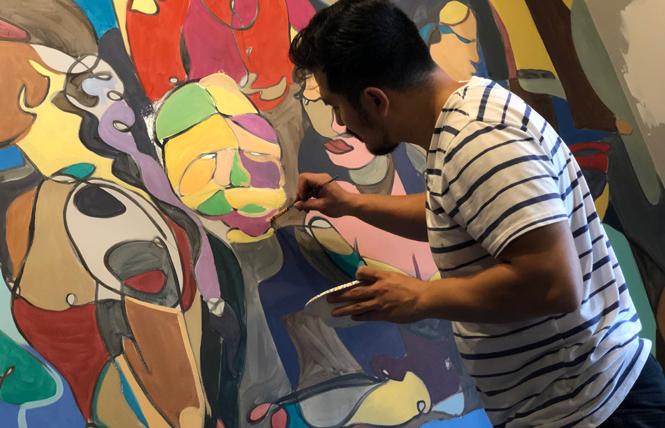 Following a spate of business closures, as many as three restaurants are slated to open in the Castro in the coming months.

Two of the openings are certain. Cafe De Casa, a Brazilian cafe, is scheduled to open November 1 on 17th street between Castro and Hartford streets. Bhoga Restaurant & Bar, serving what head chef Mel Oza is calling "progressive Indian" cuisine, will be opening in mid-November on Castro Street next to Strut.

But one of the restaurants, a third location of the Flying Falafel Vegan Sandwich Bar, faced some bureaucratic hurdles.

Flying Falafel is planning to open on Castro Street next to the city parking lot adjacent to the theater. The location was formerly home to Outfit and, most recently, a pop-up branch of Indigo Vintage Cooperative.

But the owner of Gyro Xpress, on the corner of Castro and 18th streets, filed a discretionary review request with the city planning department in which he said that converting a retail space to a restaurant is "the last thing this community needs."

"The Castro district is losing its key retail spaces. There are three falafel shops on the 400 block of Castro," Cem Bulutoglu of Gyro Xpress wrote in the request. "This operator would like to open in the neighborhood[;] he is very welcome. Our only request is that the planning department will require that an existing vacant limited restaurant space be occupied for this purpose."

The planning commission is expected to hear the item October 24 at City Hall. Planning staff recommended that the commission not take the discretionary review and approve the project.

An analysis of the discretionary review from the San Francisco Planning Department states that the planning staff found that "the change of use does not present an exceptional or extraordinary circumstance with respect to the compatibility of the proposed use within the neighborhood."

After that September 26 report, Flying Falafel owner Assaf Pashut said that he's "optimistic" about the chances of the project being approved by the commission.

Meanwhile, Cafe De Casa is opening its third location in a matter of weeks. The Castro location is slated to be its first with a dinner menu, according to co-owner Thais Moreira.

"We've been looking for a place in this neighborhood for a long time," Moreira said. "It's like Brazil — colorful and fun."

Moreira said that the dinner menu is being written and that the Castro location will be open until 10 or 11 p.m.

"This is our biggest location. We want the space to be used by the community," said Carter Bolick, Cafe De Casa's creative director. She added that the interior was designed with a potential karaoke night in mind, and that she's happy to see a Castro location opening because it connects her with her roots.

"I was born and raised in this neighborhood, so it's sentimental to use this ZIP code," Bolick said.

Down Castro Street, the Bhoga Restaurant & Bar is opening its first location. Sandeep Cherukuri, the director of operations, said that it differs from their other restaurant, Deccan Spice, which is located on Valencia Street between 22nd and 23rd streets.

"That one is authentic Indian — what you'd eat in your home," he said. "Here we are using the ancient Indian cuisine but the techniques are French and American."

Oza said he's excited to be joining "one of the most savvy dining scenes in the country."

"We wanted to be in a vibrant neighborhood but still here in the city," Oza said, adding that the Castro is a great place for late night table service.

Bhoga plans on staying open until 1 a.m. on weekends, and serving cocktails in addition to beer and wine.

Bolick of Cafe De Casa said she's excited that so many restaurants are planning on opening at once.

"There's a renewal in the neighborhood. It's going to be great," she said.