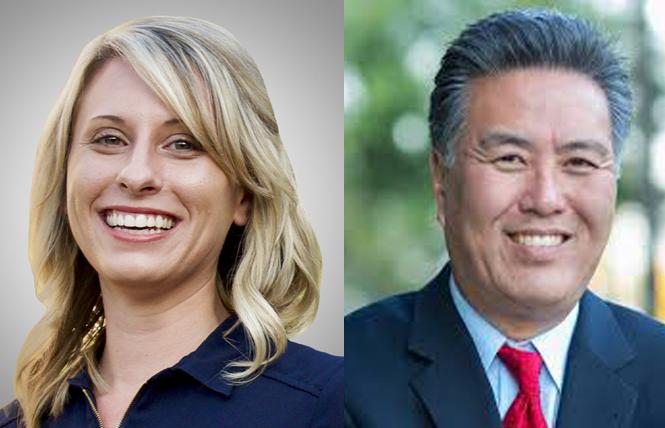 As calls to impeach President Donald Trump snowballed this week in Congress following revelations that he withheld aid to Ukraine while imploring the country's newly elected president to investigate his political rival former Vice President Joseph R. Biden Jr., bisexual California Congresswoman Katie Hill (D-Agua Dulce) came out Tuesday in support of impeaching the president if the allegations he misused the power of his office are proved true.

"I was elected to represent people who love our country, and I swore an oath to uphold, protect, and defend the United States Constitution. That's why, now, I strongly support the House of Representatives moving forward with impeachment proceedings — it is what the Constitution, my constituents, and my conscience demands," Hill wrote in an email to her supporters. "If Congress confirms reports of egregious misconduct that threaten the security of our country or undermine faith in our democracy, I will vote to impeach the president."

I strongly support the House of Representatives moving forward with impeachment proceedings -- it is what the Constitution, my constituents, and my conscience demands.

Her statement comes a little more than a month after California's other out House member, gay Congressman Mark Takano (D-Riverside), called for holding impeachment hearings against the president. His decision was based on the findings in Special Counsel Robert Mueller's report that concluded Russia had interfered in the 2016 presidential election and that Trump's campaign welcomed the intervention by a foreign government.

"Taking everything into account, I cannot ignore the call to defend our institutions, to safeguard our democratic norms, and to stand up for our democracy. It would be a dereliction of duty to sit by idly as the president chips away at our democracy, day by day," stated Takano in a video message he released August 22 to explain why he supported launching impeachment proceedings against Trump.

Tuesday afternoon, based on the latest revelations, Takano called for the president to be impeached as his actions were "an egregious abuse of power" and "a textbook definition of corruption" aimed at undermining the country's democratic process.

"Soliciting interference in our elections by a foreign power is unlawful and un-American. As I have said before, under our system of checks and balances, Congress has a duty to use the powers granted by our Founders to seek remedy and restore the people's faith in our government," stated Takano. "No person is above the law, and that includes the person who holds the highest office in the land. The path forward for Congress is clear; President Trump must be impeached."

It would be a dereliction of duty to sit by idly as the president chips away at our democracy, day by day.

We must launch impeachment proceedings against President Trump. He needs to be held accountable. https://t.co/c0Q71hPzbP— Mark Takano (@RepMarkTakano) September 20, 2019

Since the news broke last week about Trump's conversations with the Ukrainian president, numerous Democratic House members who had been on the fence about holding impeachment hearings have come out in favor of either starting the inquiry or outright calling for Trump to be impeached. Various media outlets count more than 200 House Democrats in support of launching an impeachment inquiry.

Trump, who has insisted he did nothing wrong, released on Wednesday the summary of his phone call where he repeatedly brought up an investigation into Biden and his son, Hunter, who had business dealings in Ukraine. And the White House was in talks on also turning over the whistleblower's complaint and allowing the anonymous person to speak with congressional investigators.

After meeting with the Democratic Caucus Tuesday afternoon, House Speaker Nancy Pelosi (D-San Francisco) announced the House would begin a formal impeachment inquiry of President Trump. At a news conference, she said, "The president must be held accountable. No one is above the law."

For the past two years Pelosi has strained to quell calls for impeachment in her party, instead preferring to wait for the Mueller report to be released and then favoring congressional investigations into a number of potentially impeachable offenses Trump has been accused of since taking office in 2017.

In her statement Tuesday, Hill noted that she had been "incredibly measured" in regard to the impeachment issue. Elected in 2016, Hill helped her party retake control of the House by flipping a district north of Los Angeles that had long been represented by a Republican. Considered a moderate, she is likely to be targeted by the GOP next year as she seeks a second term.

The latest revelations about Trump's actions was the final straw for Hill, whose spokesperson had indicated last week to reporters that the freshman lawmaker was supportive of beginning impeachment proceedings.

Monday lesbian Congresswoman Angie Craig of Minnesota came out in support of starting impeachment proceedings. In a statement, she wrote, "We must safeguard our electoral process and our very democracy from outside threats. For this reason, the current investigations into corruption must continue. And when there is an abuse of power of this magnitude, it is our responsibility to stand up for what is right. This is why I am calling to open impeachment proceedings — immediately, fairly, and impartially."

As of Tuesday afternoon two of the eight out House members, all Democrats, had yet to come out in support of either impeaching Trump or holding an impeachment inquiry. The holdouts are gay Congressman Sean Maloney of New York and lesbian freshman Congresswoman Sharice Davids of Kansas. Both have come under increased pressure in recent days to back impeaching Trump.

In May, Davids was quoted in a Washington Post article as saying, "While we still need to access the underlying documents and evidence, I continue to have full faith in my colleagues on the relevant House committees to conduct necessary oversight and uphold the rule of law. Congress has a constitutional obligation to serve as a check on the executive branch."

As for Maloney, he told CNN in April that, "I want the president held accountable and I want that done in the best way. I'm not sold that impeachment is the best way." But on Tuesday he signaled he was closer to backing impeachment.

In a statement, Maloney said that if the White House doesn't "immediately" hand over the whistleblower complaint made about Trump's calls with Ukraine President Volodymyr Zelensky "and the recordings of any calls — and they dispel these allegations — I'm prepared to support an impeachment inquiry."

Unless @HouseIntel immediately receives both the whistleblower complaint and the recordings of any calls - and they dispel these allegations - I'm prepared to support an impeachment inquiry. pic.twitter.com/kgz4HQ0J3P— Sean Patrick Maloney (@RepSeanMaloney) September 24, 2019

Gay Congressmen Mark Pocan of Wisconsin, Chris Pappas of New Jersey, and David Cicilline of Rhode Island were some of the earliest backers for impeaching Trump.

"The dam's not breaking. It's broken. Proud that so many of my colleagues are standing up to President Trump's wanton abuse of power today. It is clear that there is no other option than to impeach this President," Cicilline wrote on Twitter Tuesday.

Pocan also took to Twitter Tuesday to write, "It's time to end the 'I' games — investigations, inquiries, indictment — no more word salad. It's time for impeachment."

As for Pappas, he had called in July for impeachment proceedings to begin against the president. In the Senate, lesbian Senator Tammy Baldwin (D-Wisconsin), and bisexual Senator Kyrsten Sinema (D-Arizona) have yet to back impeaching Trump or calling for an impeachment inquiry to begin.

On Tuesday, Baldwin called on the White House to turn over the whistleblower compliant. She wrote on Twitter that the House "is taking appropriate action in response to the Trump administration's refusal to follow the law and provide this whistleblower complaint and inspector general report to Congress, which has a constitutional responsibility to get all the facts and provide oversight of the Executive Branch."

Correction
Last week's column, "SF D5 supervisor candidates split on transit issues," misquoted tenants rights activist Dean Preston saying that he rides the N-Judah Muni subway line everyday. The quote should have said that Preston has "been riding Muni every day for 26 years, and I haven't seen it worse."
The online version has been corrected.

Web Extra: For more queer political news, be sure to check http://www.ebar.com Monday mornings for Political Notes, the notebook's online companion. This week's column covered a report looking at how the majority of states and the federal government are failing to collect LGBT data.