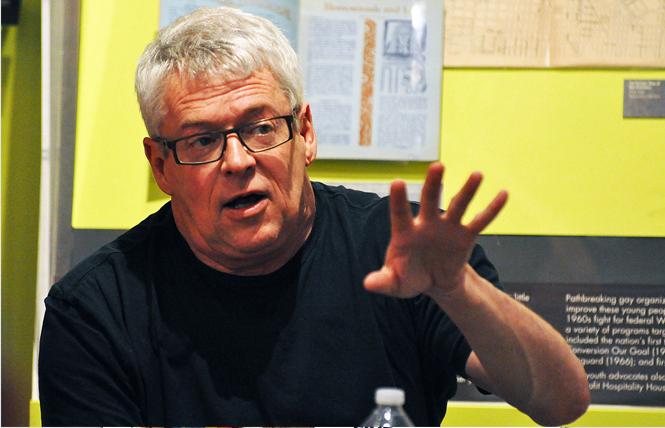 Cleve Jones, the gay longtime activist who founded the Names Project AIDS Memorial Quilt, will return to the North Bay this weekend as grand marshal of the Russian River Pride parade.

Russian River Pride officials are set for the parade Saturday, September 7, after they received a permit from Sonoma County last week, as the Bay Area Reporter noted online August 30.

Pride organizer Rodger Jensen said that Jones was selected due to his lifetime of LGBTQ activism, including founding the AIDS quilt in San Francisco in 1987, and his connection to the river going back over 40 years.

Jones' return marks a homecoming of sorts, as he once moved to the Russian River area and thought he'd never live anywhere else.

"My first experiences at the river were in the 1970s," Jones, 64, recalled in a phone interview. "I would hitchhike up, you could see hundreds of gay and bisexual men floating in the river and there were lots of places to dance."

Everything changed, he said, after AIDS arrived in the 1980s.

Jones said he himself did not get sick until 1992-1993, when "like many men in my circumstances, I moved up to the river to die."

He knew "hardly anyone," but remembers fondly all the love and support he found, "much of it from the lesbian women who looked out for me."

Close to death by 1994, Jones was enrolled in a clinical trial of what researchers would call the "cocktail," which transformed living with the disease for many when it became available a couple of years later.

"I rebounded very dramatically, but quickly developed resistance," he said. "They'd give you a new set of pills and see if your T cells went up or down."

Partly due to the influence of his friend, the gay late marijuana activist Dennis Peron, Jones discovered tiny Villa Grande, a small hamlet southwest of Guerneville. While he was undergoing chemotherapy treatment at Kaiser Santa Rosa, "I was able to live a relatively stress-free life up there. I think it's one of the reasons I survived," he said.

"I was living in Villa Grande for both major floods in 1995-1996," he recalled, "and I saw firsthand how all different kinds of people support each other." Jones remembers going to Guerneville as the floodwater rose to "seek out a disco ball" to raise his spirits.

He kept getting lung infections, however, possibly due to the damp climate in winter. His doctors suggested moving to Palm Springs for its warmer and drier conditions, so he did in 2000.

After a dispute about displaying the Names quilt in Washington, D.C. just before the presidential election, the board of the Names Project fired Jones in December 2003, taking away his health insurance.

Fortunately, in 2004, a friend and organizer for the UNITE HERE Local 2 asked for his help with LGBTQ groups that refused to honor their boycott of the Hilton Hotels.

"The workers were mostly people of color fighting for better health care," a cause close to Jones' heart, he said.

After that successful campaign, Jones was hired by UNITE HERE, to which Local 2 belongs, to build coalitions and community support. UNITE HERE represents about 300,000 workers in the United States and Canada.

He never completely settled into Palm Springs, but his interest in returning to San Francisco intensified during the 2008 filming of the movie "Milk," especially after he saw Castro Street recreated as it looked in the 1970s.

Jones was friends with screenwriter Dustin Lance Black, a gay man who won an Oscar for the film, and was portrayed by actor Emile Hirsch.

"After re-living my youth as we made 'Milk,' I wanted to return to San Francisco," he said. "I thought I'd write a book and eventually retire to Guerneville."

He did write a memoir, "When We Rise," published in 2016. It served as a partial inspiration for an ABC miniseries of the same name that was broadcast a year later.

"I want to achieve victories that will change people's lives," he explained. "We can get contracts with protection for LGBTQ individuals in places like Texas and Florida, places that don't protect our rights."
The economic health of the Russian River area is also on Jones's mind these days.

"I don't think people are aware how devastating the floods were," Jones pointed out at the end of the interview. "Guerneville has just a few weeks to make up for what was lost, so I hope lots of people come up for the parade and afterward."

The Russian River Pride parade Saturday, September 7, starts at 11 a.m. on Main Street in downtown Guerneville. Many other activities are planned. For more information, visit http://www.russianriverpride.org.

Jones was a co-founder of the San Francisco AIDS Foundation and will be at its annual Tribute Celebration the night of September 7, presenting the Cleve Jones Leadership Award to Sister Roma of the Sisters of Perpetual Indulgence.

Updated, 9/5/19: This article was updated to indicate Jones has long been involved with UNITE HERE Local 2. An earlier version mistakenly had that it was the Service Employees International Union.