Transmissions: Exist, we must 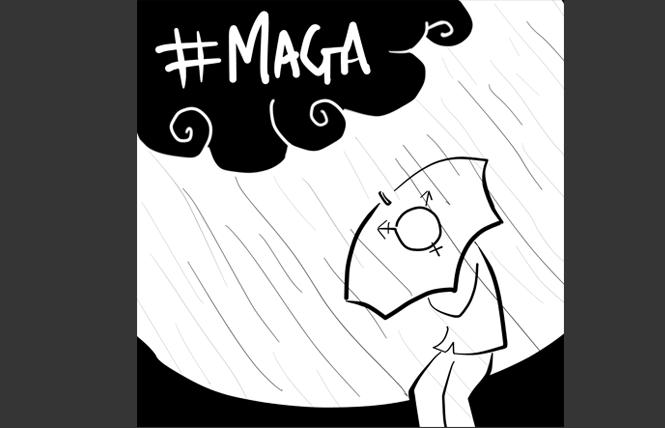 It's so damned hard to be transgender right now, and just existing is a radical act. It shouldn't have to be like this.

The Trump administration recently stepped into an upcoming U.S. Supreme Court case over a transgender woman, Aimee Stephens, who worked for a funeral home in Michigan, arguing against her rights. Its goal? To use this case to abolish all transgender rights under Title VII of the Civil Rights Act of 1964 by disallowing "sex" to be inclusive of transgender identities.

The case itself, RG & GR Harris Funeral Homes v. EEOC & Aimee Stephens, could have far-reaching ramifications, crumbling away any and all protections of transgender people at the federal level. At worst, the case could take us all the way back to dress codes that require all women to wear dresses and skirts to work like it was the 1950s.

Also, I hasten to add, with the current makeup of the court, the cards are stacked against transgender rights.

Transgender people — primarily black transgender women — are being killed at higher levels than ever before. Every one of the women murdered this year has been misgendered by police and the mainstream media, having their identity stripped away just as quickly as their murderers took their last breath.

Death isn't just at the hands of others and we are not the only targets of transphobia.

Maurice Willoughby, a non-transgender man, was in a relationship with a transgender woman, Faith. In a video posted online, Willoughby was harassed by a number of other men for loving his partner. In the confrontation, he is pelted with transphobic and homophobic abuse. According to a friend of his, this was far from the first or last time.

It will not happen again, however: Willoughby recently took his life after this harassment became more than he could bear.

Again, it shouldn't have to be like this. Just existing is a radical act.

Those who oppose us want to strip away our rights, make us powerless and, ultimately, erase us. It's not just the government.

Religious leaders want to warn their parishioners against the evil we supposedly represent. The pope has likened the fight for transgender rights to nuclear weapons, and every wannabe evangelical preacher has set their sights on transgender people.

A small but vocal offshoot of supposedly radical feminism — just like the religious right — wants to claim that transgender people are some sort of threat, not only to them but to society in general. They claim that evil machinations are stealing away masculine women and forcing them to be transgender, and that every transgender woman is simply a rapist in disguise.

This, of course, is nonsense.

Even many who might otherwise be allies are retreating, deciding it's safer to still their tongue in a time when we need them the most, when their stance could literally be a matter of life and death for so many of us.

We are vilified, ridiculed, and treated like filth. Many would like us to just shut up and go away.

It really shouldn't be like this, and just existing shouldn't have to be a radical act.

Every day we rise again into the sunlight is a day when we oppose those who stand against us, another day when we declare our existence in a hostile world.

We must do more than exist, however. We need to thrive. We need to show that, try as they might, our opponents cannot, and will not, beat us down. We need to live our lives undaunted, with honesty, and show that we deserve our own space and our own time.

We need to be visible, willing to be seen, willing to stand up and stand out. Our opponents are more than willing to speak against us: it is time we wrested the microphone from their hand and make some noise.

We can no longer afford to wait for someone else to come in and champion our needs. It is time for us to be our own saviors, and fight back against the injustices from the Trump administration and others.

This, of course, isn't easy. It never has been, and it certainly isn't now. Even as I advocate such boldness, I know that this is a dangerous time. It becomes all the more important that we make sure to have each other's back, and make sure we're all doing OK.

We need to come together as a community, and find the places we can work together. I don't just mean among those of us who are varying shades of trans or gender-nonconforming, but we need to find our common groups in the larger LGBTQ community, and in the struggle for racial injustice, and in fight against misogyny, and in sex worker rights, disability rights, abortion rights, and anywhere where we can forge common bonds together.

Those who stand against us have little problem doing so. They'll welcome any sort of evil within their ranks if it furthers their goals.

I'm not saying we need to take on that same level of bile and putrescence, but we do need to work to find the places we can be stronger as a whole, and move forward as a group, even as we work on issues specific to us.

It's so damned hard to be transgender right now, and just existing is a radical act.

Yet, exist we must.

Gwen Smith lacks putrescence. You can find her at www.gwensmith.com.