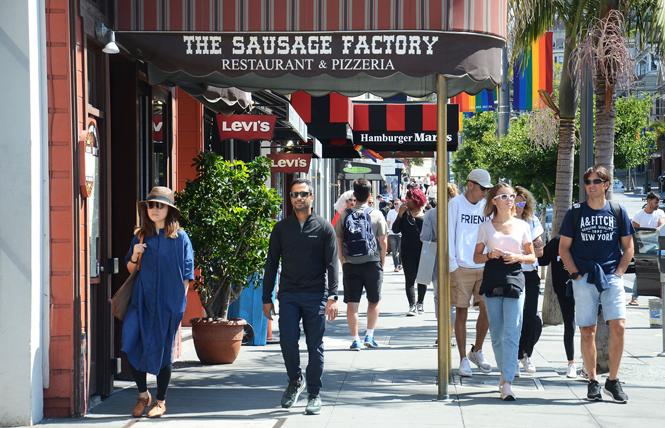 The recent mass shooting in nearby Gilroy, as well as the other incidents in El Paso, Texas; Dayton, Ohio; and many other cities, prompted us to gauge whether the Castro is prepared with safety plans for a violent emergency. The results were about what you'd expect: people are concerned but many don't really know what they would do in an emergency.

President Trump's racist language encourages white supremacists and homophobes to take violent action, and like it or not, the Castro is a target. For decades, the neighborhood has been careful and vigilant to gay bashings and crime, but there was a new sense of vulnerability three years ago after the Pulse nightclub shooting in Orlando, Florida, where 49 people were killed and 53 others were injured. Just last week, a neo-Nazi was arrested in Las Vegas on suspicion of planning to blow up an LGBTQ club and a synagogue. Shootings at houses of worship are a major concern too, as folks at Congregation Sha'ar Zahav on Dolores Street noted. So, it was reassuring to report that the queer synagogue and groups like Castro Community on Patrol take safety seriously.

We want residents, business owners, and their employees to be earnest about their safety too — and since our article was published, that seems to be the case.

Greg Carey, chair of CCOP, has been working to spread his violence prevention message. Years ago, he told us, CCOP and the state Alcoholic Beverage Control agency held a training session for club owners on checking IDs and liquor over-pouring. It was well attended, Carey told us, and all these years later, he's observed the sessions have stuck as the owners have continued to train their employees. He'd like to organize something similar for violence prevention, not necessarily an active shooter drill, but some type of training utilizing the San Francisco Police Department that would teach club owners and workers how to spot someone casing the neighborhood, for example, because that can deter other potential incidents.

"Training helps people develop a plan without needing to invent one on the spot," Carey said. "Knowing we already have a plan lets us take a controlled deep breath to give our mind time to take actions than can save ourselves and others."

Amanda Ripley, author of "The Unthinkable — Who Survives when Disaster Strikes — and Why," offers important insights into how people without a plan react when a crisis happens: often, their "fight or flight" instinct is short-circuited by shock and terror; others freeze up and are unable to move to save their own lives. Stress and fear can cause severe time distortion, she noted. Carey said that an incident in the Castro involving a subject with a knife seemed to last for 30 minutes. Yet, when he reviewed the body-cam footage it showed police were there in four minutes.

CCOP has scheduled a basic self-defense seminar at Strut, the men's health center in the Castro, for October 8. CCOP, which is a volunteer group, has trained over 500 people in this course over the years. Its focus is on responding to stranger-danger, whether it is a street robbery or a person who seems intent on assault. It does touch on active shooters, but the basic content is about awareness, seeking assistance from others, and having an escape plan — which everyone should learn for their own personal safety.

Mandelman told us that Trump's hateful rhetoric places queers, people of color, immigrants, and others at heightened risk, and he explained that going back to 1978 when disgruntled ex-supervisor Dan White assassinated gay supervisor Harvey Milk, the LGBT community has been a potential target of gun violence. So, there's nothing new here. Staying home, however, only gives the haters what they want: a society so fearful that normal daily life ceases. We will not give in to terrorists, foreign or domestic, and you shouldn't either. But we should have a plan.