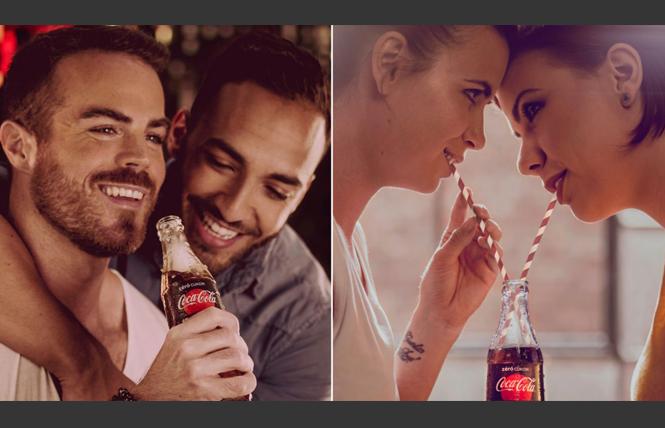 An advertising campaign, "Love is Love," launched by the Coca-Cola Company ahead of a progressive music festival in Budapest, Hungary last week has led to political leaders calling for a boycott of the global soft drink company.

Coke blanketed Budapest with images of couples — including lesbians and gay men — kissing and in friendly intimate poses at train stations, bus stops and other parts of the city. They were posted on the company's Hungarian Facebook page August 1. The ad campaign led up to the Sziget Festival that ran August 7-13.

Along with the images the posters were emblazoned with statements such as, "Zero Sugar, Zero Prejudice."

The ads led to some backlash from the country's conservative leaders.

Hungarian Deputy Speaker and Parliament Member István Boldog, along with conservative media outlets, called for a boycott of Coke products until the ads are removed.

An accompanying online petition for the boycott garnered 39,700 signatures toward its 50,000 goal as of August 13.

A translated version of the petition points out that most international corporations don't run ads with openly gay content and called Coke's campaign a test.

"If Hungarian society accepts this, there will be more such steps. Posters, commercials, films, rainbow products, etc. and will become increasingly difficult to stop," the petition stated.

Coke isn't backing down from its campaign.

A company spokesperson said in a statement to media outlets that it "strives for diversity, inclusion, and equality in our business, and we support these rights in society as well."

"As a long-standing supporter of the LGBTQI community, we believe everyone has the right to love the person they choose. The campaign currently running in Hungary reflects these values," the statement read.

The company hasn't seen a drop in sales in Hungary due to the controversy, said the spokesperson.

An International Lesbian, Gay, Bisexual, Trans and Intersex Association survey in 2017 found that more than 60% of Hungary's citizens believe that equal rights should be afforded to everyone, regardless of sexual orientation.

Same-sex unions were legalized in Hungary in 2009, but Prime Minister Viktor Orban opposes legalizing same-sex marriage, as does his Fidesz party. Orban hasn't commented on the Coke ads or the petition against them.

Tomas Dombos, board member of Hatter, Hungary's oldest gay rights group, told ABC News that LGBT community leaders aren't sure if the recent anti-gay rhetoric is a political movement or the spouting off of one homophobic leader.

Previously, the party has been focused on anti-immigration.

The two unidentified men were married abroad. However, in China, their union wasn't legally recognized as same-sex marriage isn't legal in the country.

Yet, a little-known loophole in the law, adult appointed legal guardianship, allows for adults to appoint a guardian to act on their behalf when they are unable to make a decision themselves. The appointing legal guardianship only became legal in 2017 for adults who aren't seniors.

Homosexuality was decriminalized in 1997. China removed homosexuality as a mental disorder in 2001.

In order to legally protect each other as a couple, the men were able to register guardianship of each other at the Beijing Guoxin Notary Public Office August 8, reported the South China Morning Post.

The notary posted the announcement on Monday, but it has since been removed, reported Sixth Tone.

By becoming each other's legal guardians, they are able to make medical decisions on each other's behalf, protect property rights, inheritance and other legal protections often conferred by marriage.

More than 10 same-sex couples in China, including in Chengdu, Guangzhou, and Shanghai have also completed a similar process, Peng Yanzi, director of LGBT Rights Advocacy China in Guangzhou, told the Morning Post.

"Many consider it as a marriage certificate for same-sex couples. I think there's still a long way to go," he said, pointing out that same-sex couples don't have the right to raise children.

Peng, who is currently going through the legal guardianship process with his own partner, called the law an "important progress in protecting the rights of LGBT people." He said that many LGBT Chinese people face legal barriers with sharing property and making medical decisions daily.

Not everyone agrees with China legalizing same-sex marriage, much less homosexuality.

Only 31% of Chinese believe same-sex marriage should be legal in China, reported the Council on Foreign Affairs. The Pew Global Attitudes Project found that 57% of respondents polled in a 2013 survey believed that homosexuality should not be accepted. In 2016, the most recent information available, the United Nations Development Program found that more than half of 30,000 LGBT Chinese were discriminated against because of their sexual orientation, reported the Morning Post.

China has been criticized in recent years for its crackdown on LGBT social media and online content, television shows, and other media.

Complications remain with the law as application of the new rules still need to be clarified, the Morning Post reported. At the same time, same-sex couples continue to push forward on legalizing same-sex marriage, adoption rights, and other rights in China.

Report: Violence rampant against LGBT Latin Americans
Murders of LGBT people in Latin America and the Caribbean is a daily occurrence, according to a new report.

The Regional Information Network on Violence against LGBTI People in Latin America and the Caribbean found that four LGBT people are murdered a day in the two regions.

Furthermore, during the last five years a total of 1,300 queer people have been murdered in Colombia, Mexico, and Honduras, according to the network.

The network is a coalition of 10 LGBT organizations from the regions. Its goal is to raise awareness of the violence among governments and the general population.

Colombia, Mexico, and Honduras account for nearly 90% of all deaths, according to the network's findings.

A majority of the victims were young gay men, 18 to 25 years of age, most likely murdered in their homes. The number of transgender women murdered in the streets closely followed.

Marcela Sanchez, head of Colombia Diversa, an LGBT organization based in Bogota, is a member of the network.

"Many of these deaths do not matter to anyone, not even to their own families," she told Reuters.

The countries in the study have an overall high-level of crime and drug violence, with murder rates three times the global average of 6.1 per 100,000 people, according to the United Nations.

A trend in Bogota shows that gangs target gay men as they are believed to be wealthier than straight men, reported Reuters. In nearly 12% of the murders the victims knew their killer.

An additional factor the network couldn't ignore was the rise of evangelical Christians, particularly in Central America, that espouse conservative values that are often anti-LGBT.

The report also highlighted progress made for LGBT rights — such as marriage equality and adoption — within the past decade. That didn't change the reality that violence against the LGBT community remains rife, Reuters reported, citing the report.