Stevens was an early supporter of LGBTs 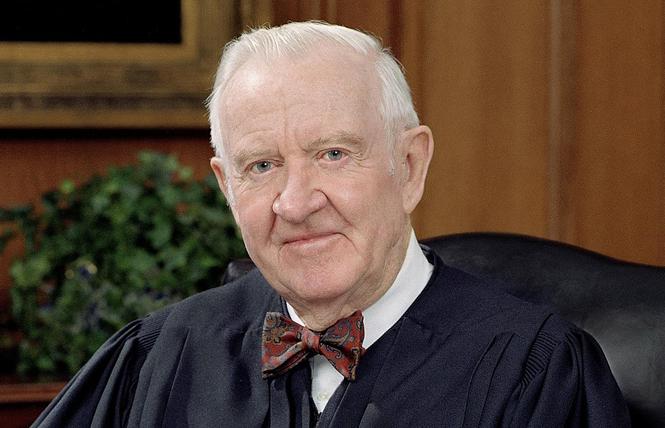 Former U.S. Supreme Court Justice John Paul Stevens, who was buried in Arlington National Cemetery this week, was one of the first members of the nation's highest court to express support for LGBT people.

Stevens died July 16 in Fort Lauderdale, Florida. He was 99.

Stanford Law Professor Jeffrey Fisher, who clerked for Stevens during the 1998-99 session, said Stevens was "absolutely" one of the first justices of the Supreme Court to stand up for LGBT people.

"I remember the term I clerked that the justice was quite distressed when the court denied review in a case from Cincinnati ... where the 6th Circuit had let an anti-LGBT rights ordinance stand," said Fisher. "It was clear this was something he cared deeply about and that he was committed to the project of eventually revisiting Bowers."

But even before that case, Equality Foundation v. Cincinnati, Stevens made clear he cared about the rights of LGBT people. As early as 1976, he and Justices William Brennan and Thurgood Marshall voted to hear the appeal of a man challenging Virginia's ban on sodomy for male couples.

"Our three votes to hear the case expressed our view that the issue presented was sufficiently important to require full briefing and argument before being decided," wrote Stevens.

Unfortunately, it takes at least four justices to agree to hear an appeal and so, in the case of Doe v. Commonwealth's Attorney for Richmond, the appeal was not taken. Instead, the Supreme Court majority affirmed the lower court decision without hearing arguments. Stevens, Brennan, and Marshall asked that the record show they would have heard the appeal.

"We now know — based on a string of cases beginning with Lawrence v. Texas in 2003 and culminating with Obergefell v. Hodges in 2015 — that the summary affirmance [in Doe] was incorrect and failed to appreciate the full aspect of liberty protected by the Fourteenth Amendment," wrote Stevens in his 2019 memoir "The Making of a Justice."

Stevens wrote one of the two dissents to the Bowers decision, saying it was "plainly unacceptable" to think that same-sex couples do not have the same interest in liberty as others. The principle that "all men are created equal," he said, "surely must mean that every free citizen has the same interest in 'liberty' that the members of the majority share.

"From the standpoint of the individual, the homosexual and the heterosexual have the same interest in deciding how he will live his own life, and, more narrowly, how he will conduct himself in his personal and voluntary associations with his companions," Stevens wrote.

To allow a state to enforce a ban on "sodomy" against one group and not all people, he wrote, the government should have to identify a legitimate interest "more substantial than a habitual dislike for, or ignorance about, the disfavored group."

Stevens was clearly proud of his actions in Doe and Bowers. In his memoir, he wrote that he had felt "particular satisfaction in seeing the seeds I planted in my Bowers dissent ... grow to strike down anti-sodomy statutes" in the court's 2003 decision in Lawrence v. Texas. And that decision "led to an even greater expansion of liberty and equality for our fellow citizens in later decision United States v. Windsor, which struck down the Defense of Marriage Act, and Obergefell v. Hodges, which recognized the fundamental right to marry cannot be denied to same-sex couples.

"Tony Kennedy was of course instrumental in these groundbreaking decisions," wrote Stevens in his book, "but I like to think that, even though I had left the bench, I had a hand in them as well."

Jennifer Pizer, law and policy director for Lambda Legal Defense and Education Fund, said that Stevens' dissents in Doe and Bowers did plant the "seeds that bloomed 17 years later in Lawrence v. Texas, with active cultivation by movement lawyers and many others." She also credited Stevens' intellect and interpersonal skills with creating a relationship with Kennedy that "helped shape Kennedy's opinion for the court in Lawrence v. Texas, and then his decision in Obergefell a dozen years later, after Justice Stevens had retired."

"In other words, although he has been less recognized popularly within the LGBTQ movement than Justice Kennedy, Justice Stevens' voice articulating core principles of personal rights and equal dignity over three and a half decades on the court was among the most important foundation-layers for the LGB rights breakthroughs of recent years," said Pizer. "His role was immeasurably important. And his continuing voice since his retirement — one of constitutional principles, humane social critic, and call to civic engagement — will be dearly missed."

In 1987, one year after Bowers, Stevens, an appointee of Republican President Gerald Ford, had the third best voting record in support of equal rights for gays and lesbians (behind Marshall and Brennan). By 1992, when Marshall and Brennan had retired, he and Justices Harry Blackmun and David Souter (all three Republican nominees) had the best voting records on LGBT-related cases.

In 2000, Stevens led the dissent against a 5-4 majority that held the New Jersey law prohibiting discrimination based on sexual orientation in public accommodations could not be used to require the Boy Scouts of America to accept openly gay scout leaders. The case was Boy Scouts of America v. Dale, and the majority said the First Amendment's right to association protected the BSA's right to exclude gays.

Stevens' dissent in the Boy Scouts case sounds like language suited to defend LGBT people against cases today asserting companies have a right to exclude LGBT people based on the business vendors' professed religious beliefs. He criticized the majority for accepting at face value the Boy Scouts' claim to be acting on a belief that being gay is "not morally straight."

"I am unaware of any previous instance in which our analysis of the scope of a constitutional right was determined by looking at what a litigant asserts in his or her brief and inquiring no further," wrote Stevens. Asserting a belief at odds with an anti-discrimination law, he wrote, "is not a freedom to discriminate at will. ...

"If this court were to defer to whatever position an organization is prepared to assert in its briefs, there would be no way to mark the proper boundary between genuine exercises of the right to associate, on the one hand, and sham claims that are simply attempts to insulate nonexpressive private discrimination, on the other hand," he wrote. "Shielding a litigant's claim from judicial scrutiny would, in turn, render civil rights legislation a nullity, and turn this important constitutional right into a farce."

While Stevens voted in favor of LGBT interests in more than two-thirds of the cases that came before him, he did not always land on the pro-LGBT side. In 1987, for instance, he voted with the majority to say the government had no authority to stop the U.S. Olympic Committee from barring the organizers of the Gay Games from calling their event the "Gay Olympics."

And in 1995, he voted with the unanimous court to say that a Massachusetts law prohibiting discrimination based on sexual orientation in public accommodations could not be used to force the organizers of Boston's annual St. Patrick's Day parade to exclude an openly gay contingent.