Prince William would support his kids if they were gay 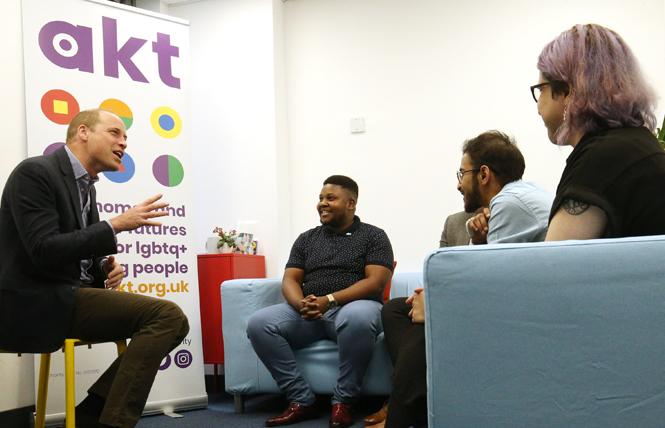 Prince William, left, told participants at an LGBT youth organization last week that it's "absolutely fine" if one of his kids comes out as gay. Photo: Courtesy BBC

Prince William said that he and his wife, Kate Middleton, the duchess of Cambridge, would be "absolutely fine" and "fully support" their children if one of them came out as gay.

William and his brother, Prince Harry, have both been outspoken supporters of the LGBT community. William was the first royal to pose on the cover of a gay magazine.

Britain's future king was speaking June 26 to youth at the Albert Kennedy Trust, a London LGBT youth organization that helps young people on the verge of becoming homeless, ahead of the 50th anniversary of the Stonewall riots in New York.

Reuters reported that the organization was opening a new service center, which prompted the prince's visit.

The duke and duchess' children Prince George, Princess Charlotte, and Prince Louis are 5, 4, and 1, respectively.

Speaking as a royal and a father, William, 37, told the youth he was nervous because of his family's position, but also because of the "hateful words, persecution" and "discrimination that might come," he said, when asked how he would react if one of his children came out to him.

He admitted that the topic isn't something he thought about before becoming a father himself.

If one of his children does come out as gay, they wouldn't be the first British royal to do so.

The first openly gay royal, Lord Ivar Mountbatten, 56, came out in 2016 and married his longtime partner, James Coyle, in September 2018.

No matter what, William said of his children, "I fully support whatever decision they make."

In a briefing on LGBT youth homelessness published earlier this year, Tim Sigsworth, chief executive of the trust, noted that 77% of young homeless LGBT people are rejected by their family or abused.

"I was personally rejected by my mum," Sigsworth told the BBC. "The idea that the future monarch is saying they would support their children if they came out as LGBT is a message to the whole of society really, a message that we need to support and we need to empower LGBT people."

Homosexuality is still criminalized in 35 of the 53 Commonwealth nations that were once British colonies and adopted Britain's former anti-sodomy laws.

Sigsworth told reporters that he was touched by William's remarks.

"I was first impressed by his level of knowledge already, but his empathy and appreciation of the struggles and challenges faced by LGBT people was incredible to me," said Sigsworth.

Pride marches on
Thousands of LGBT people and allies came out around the world from Costa Rica to Ukraine to celebrate Pride throughout June.

The celebrations led up to the festivities commemorating the 50th anniversary of the Stonewall riots with the combined NYC Pride and WorldPride in New York June 30.

Tens of thousands of LGBT Costa Ricans took to the streets of San Jose, the country's capital city, to celebrate the country legalizing same-sex marriage with a constitutional court ruling last year. The ruling brought the country into compliance with the Inter-American Court of Human Rights order for all Latin American and Caribbean countries to legalize marriage equality in 2018.

Weddings will commence in May.

Kiev celebrated its largest Pride event to date with more than 8,000 people participating in the "March of Equality" parade in Ukraine. France 24 reported the turnout was 3,000 more than the previous year.

Police and national troops, along with a group of military veterans, came out in force to protect the marchers from an estimated 1,000 anti-LGBT activists.

In Warsaw, Poland, Mayor Rafal Trzaskowski became the first to march in the city's Equality parade June 8, which called for the recognition of LGBT rights in the conservative, mostly Catholic country.

An estimated 47,000 marchers took to Warsaw's streets in a blaze of rainbows.

"Not everyone has to go to the Equality parade, but everyone should respect minority rights," Trzaskowski told the crowd from a parade float, according to the News Tribune. "It's really important for me that Warsaw be open, that Warsaw be tolerant."

According to the New York Times, Poland is set to have a record number of 20 Pride parades this year despite attempts by some local politicians to block the events.

Diplomats from the United States, Canada, and other Western countries joined the parade in support of Poland's LGBT community.

In northern India on the border of Pakistan in the Punjab state, some 75 teenagers hosted Amritsar's first-ever Pride celebration dressed in rainbow colors and waving rainbow flags as they marched through the streets of the holy city, reported the Times of India.

The town is known for the holiest gurdwara, the Golden Temple (Harmandir Sahib) in the Sikh religion.

The teens' goals were to help "break isolation" and criticism for the region's LGBT community. They largely succeeded. The crowd responded in various ways. Some went away once they discovered what the rainbow flags meant while some criticized the undeterred youth.

A much smaller Pride celebration happened with LGBT refugees on the outskirts of Nairobi, Kenya June 20 for the second annual International LGBTQI Refugee Day.

"It would be wonderful to go out onto the Nairobi streets like people in Europe and celebrate who we are, especially on Pride Month. But it's not safe so we have to celebrate like this," Obote, 40, a bisexual IT professional from Uganda, told Reuters. (Reuters only reported Obote's first name.)

Not all planned Pride celebrations happened.

Organizers in Georgia postponed Tbilisi Pride for safety concerns after a successful week of events leading up to what was to be a big "March of Dignity," the city's first Pride march, according to 76 Crimes.

The show follows a gay couple — Aristoteles, played by Emilio Osorio, and Cuahutemoc or 'Temo,' played by Joaquin Bondoni — in their first year in college in Mexico City.

The two young men appeared in another popular telenovela "My Husband Has More Family," which ran from 2017 until February this year, reported Reuters. Nearly 4 million viewers tuned into the final episode.

Fans were ecstatic about the news of the show.

Sofia Estefania Palacios Osorio, 21, tweeted that it was a "dream come true."

"There is so much machismo, discrimination, and taboos around LGBT couples," she wrote. "It's going to help more people see that it's something normal, that love is love."

Some gays criticized the unrealistic portrayal of gay men by sanitizing their lives.