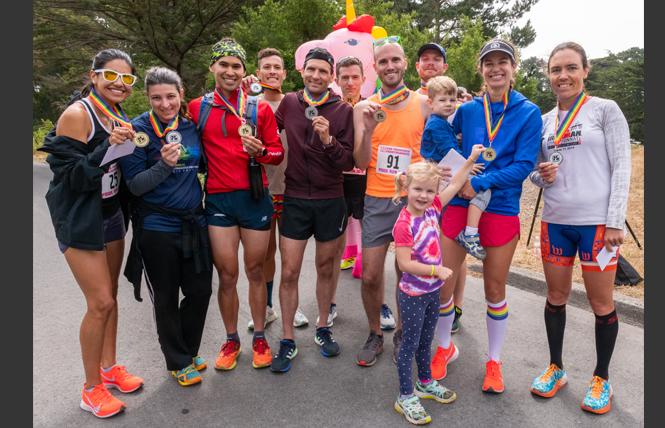 A day before millions of LGBT individuals and their supporters gathered in urban streets across the globe to celebrate the 50th anniversary of the Stonewall riots, several hundred of them gathered under the redwoods and eucalyptus to share in a quieter, calmer sort of Pride while marking their own milestone anniversary.

The San Francisco Pride Run Saturday, June 29, drew a meet-record 800 runners to the 5K and 10K competitions in Golden Gate Park, capping the celebration of the 40th anniversary of the founding of International Front Runners.

The weather was San Francisco-perfect: no rain and just the slightest chill to keep runners cool. There were unicorns (as mascots and runners), there were applause, smiles, and cheers, and the woods were unblemished by the sorts of piles of discarded food and trash that a day later would fill the downtown transit centers and sidewalks around corner trash cans.

Race organizers said they did not do any extra promotions this year over last year, when the race drew just over 600 runners. The explosion in numbers forced registration to be closed early last week for the first time; it also received a shout out on the June 23 CBS Sunday morning show during its weekly calendar segment.

The sudden growth was unanticipated, but not unappreciated.

"This is really great," said outgoing race director Chad Slife. "We will meet and talk about this. I'm not running for re-election, but in my report I am going to recommend shooting for more people next year."

One reason the Pride Run is small is because it is very much a grassroots event with modest sponsorships. This year the beneficiary was Gender Spectrum (http://www.genderspectrum.org).

I asked several runners why they thought the race was so much bigger this year and why they ran in it. Their responses ranged from a troubled political climate that underscored the importance of being visible and engaged to the draw of the Stonewall and IFR anniversaries to the growth of recreational running.

"This is my first time running this race," Vaden, 37, said. "I love Golden Gate Park. It's so beautiful; the scenery's great. I use running as therapy to clear my head."

"This is my third time running this race," said Michael Padilla, 49, who competed in the men's 5K. "It's my way of giving back to the community. It's the one thing I do for Pride. It's a great race: lots of people, lots of community and camaraderie. And the view is so wonderful."

The run seemed like a natural Pride choice for Padilla.

"I used to be a really big runner," he said. "I used to do marathons. I just like being outdoors, the fresh air, the sense of being physical."

Padilla said he thought the growth of the race this year reflected communal strength.

"I think the sense of community has grown — not just the LGBT community, but the allies as well," he said. "There's a lot of support from that side of the community."

"I'm not a member of the LGBT community, but I support them," Shirazi said. "This is my first time running this race. I'm using it to train for the Berlin Marathon. I do about four marathons a year. I'm trying for PR marathon times right now, and running shorter races like this is helpful with that. And running around people helps you push harder."

"Honestly, it's incredible," Shirazi said. "The energy, the costumes, the happiness, the representation from our elected officials. It's really powerful to be here on the 40th. I hope it keeps on getting bigger and I'm looking forward to running it next year."

Results from this year's Pride Run are available at http://www.sffr.org

Semenya triumphs at Stanford
In her first race since she was temporarily reinstated by court order after being barred by the international track federation, lesbian South African runner Caster Semenya had a dominating 800-meter performance in the Prefontaine Classic, held Sunday, June 30, at Stanford.