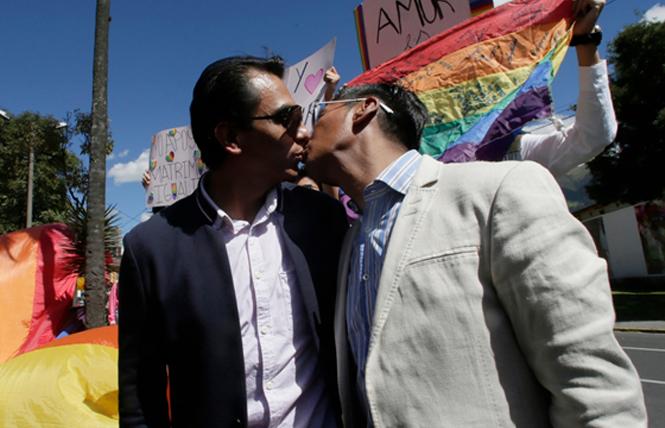 Same-sex marriage plaintiffs Javier Benalcazar, left, and his partner, Efrain Soria, kissed as they arrived to learn about the final decision of the Constitutional Court. Photo Credit: AP

Ecuador officially became the 27th country in the world to legalize same-sex marriage on June 12.

It was a narrow win, with judges ruling 5-4 in favor of same-sex marriage so that the country is in compliance with the Inter-American Court of Human Rights 2018 marriage equality ruling.

In January 2018, the court that oversees human rights in the Americas ordered all Latin American and Caribbean countries that hadn't legalized same-sex marriage to update their laws to do so.

The Ecuadorian case was brought by two gay couples — Efraín Soria and Javier Benalcázar and Rubén Salazar and Carlos Verdesoto — who sued the country for their right to marry.

Soria is president of the Ecuadorian Equality Foundation.

The ruling also ordered Ecuadorian lawmakers to pass a same-sex marriage bill. Currently, Ecuador's constitution defines marriage as between a man and a woman.

The win came after nearly two decades of work, representatives of the Ecuadorian Federation of LGBTI Organizations said in a statement.

They were opposed by the Catholic Church and the Christian conservative Life and Family group in the mostly Catholic country.

Same-sex unions have been legal for a decade, but couples did not have the same rights as straight married couples.

Reuters reported that opponents argued that rather than grant marriage equality, supporters should lobby parliament to gain equal rights to marriage under the law that granted same-sex civil unions.

"There are no words to express how we feel right now," Danilo Manzano Navas, director of Diálogo Diverso, a Quito-based advocacy group, said in a Facebook Live video he recorded after the court announced its ruling, reported the Washington Blade.

Earlier this month, Brazil's Supreme Court ruled 8-3 in favor of criminalizing homophobia by including it with the country's law against racism until congressional members could pass separate legislation addressing homophobia.

Brazil criminalized racism in 1989, reported the New York Times. Individuals convicted of racism face up to five years in prison.

Bolsonaro, whose anti-gay stance is widely known, criticized the court's most recent ruling stating it could "hurt" the LGBT community.

He told reporters on June 15 that he would "think twice" about hiring a gay person.

"It's very exciting to see that Brazil has moved to protect LGBTQ citizens by criminalizing homophobia, however, I have my reservations about the effectiveness of this for everyday people," María Xiomára Dorsey, an organizer with Idle No More SF Bay, wrote in a Facebook message to the Bay Area Reporter. "My personal fear is that while this looks great on paper and in the news, people under the radar will still get away with their hatred because they know their president feels the same as they do, and that is where the danger still remains."

She wrote that Bolsonaro's homophobia should be denounced at "every opportunity," which she vowed the Brazil Solidarity Network would continue to do.

The Brazil Solidarity Network and Idle No More SF Bay collaborated with the Indigenous Women of the Americas Defending Mother Earth Treaty to organize the San Francisco demonstration.

The action will take place Friday, from 9 to 11 a.m., outside of the Brazilian Consulate, 300 Montgomery Street. Protesters are encouraged to bring musical instruments and paint to create a mural. For more information, visit https://bit.ly/2Fhy2eA.

The documentary has won many accolades since its release in April.

To mark the occasion, director Tom Shepard, a 40-year-old gay man, who co-produced the documentary with Jen Gilomen, a 42-year-old lesbian, released a new trailer.

"Unsettled" will play at the Castro Theatre June 23 at 1 p.m. Tickets are available online for $15 general admission and $13 for students, seniors, and people with disabilities. For more information, visit https://www.frameline.org/.