Guest Opinion: LGBTQ solidarity in the age of Trump 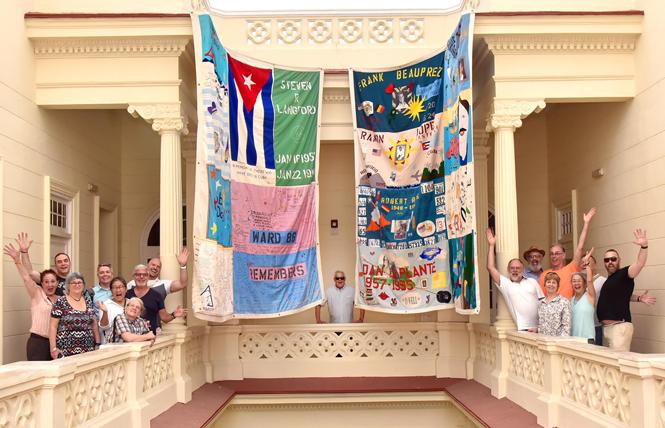 Many people, regardless of their gender identity or sexual orientation, are surprised to hear that Cuba has a vigorous LGBTQ+ movement whose primary supporters are the Cuban government (through CENESEX, the Cuban National Center for Sex Education) and progressive churches, largely Christian denominations but inclusive of other faiths.

Just as Pride activities during June are the public centerpiece for LGBTQ+ people and supporters in the United States, for the last 12 years the month of May has been the time for the Jornada, Cuba's Pride activities that coincide with the International Day Against Homophobia and Transphobia. During the Jornada, the Cuban LGBTQ+ community comes together to gather strength, heal, and inspire. It includes social gatherings, educational activities, and artistic expressions. The congas, their version of our Pride parade, are their most visible and powerful means to organize and show the strength of the LGBTQ+ community.

This was Rainbow World Fund's eighth year participating in the Jornada and carrying out our humanitarian aid activities in Cuba, which have included supporting the LGBTQ+ community, helping children with HIV/AIDS and other chronic illnesses, and providing direct aid following natural disasters. Our 16-person delegation included gay activist Cleve Jones, who was invited to participate in the Jornada as a grand marshal for the Havana conga and to receive the CENESEX Prize in recognition for his contributions to the queer movement.

Anticipating an extraordinary opportunity to engage in so many aspects of the Jornada, we were shocked on the day before our arrival in Havana that the government, through CENESEX, had canceled the gay congas both in Havana and Camagüey, a second conga held to outreach to LGBTQ+ communities in other parts of the country.

The cancellation was officially attributed to "international and regional" tensions, leaving many to speculate as to the actual cause. It is evident that Cuba is already feeling the hostile effects of the Trump administration's efforts to inflict a stranglehold on the economy by hardening the 59-year-old embargo in order to undermine Cuba's ties to Venezuela. These efforts include dramatically reducing the amount of monetary remittances U.S. citizens can send to their families, placing restrictions on business banking and oil imports, promising to severely limit travel to Cuba, and worst of all, activating Title III of the Helms-Burton Act allowing lawsuits to recover property nationalized after the Revolution. The resulting cash crisis has forced the rationing of basic foods and power consumption in many sectors.

Local participants also revealed that there had been a dramatic rise in pressure from anti-LGBTQ+ fundamentalist Christians who, emboldened by the failure of Cuba's new constitution to include a marriage equality provision, were threatening to disrupt the congas. Part of the evangelicals' tactics had been to inflame the homophobia that already exists in Cuban society.

So did the bad guys win? No. Most of the other Jornada events were held with large and enthusiastic audiences. Jones received the CENESEX Prize at a dazzling gala event at the Karl Marx Theater, the largest venue in Cuba. Presenting the award was Mariela Castro Espin, an ally who is a member of the national assembly, the director of CENESEX, daughter of former president Raul Castro, and the country's best-known official LGBTQ+ rights activist. In return, Jones presented Castro Espin with one of the last rainbow flags created by the late Gilbert Baker. It was a moment that deeply joined Americans and Cubans in support of the rights of all people.

On what would have been the day of the conga, an open-air Diversity Celebration was held instead. At the evening's entertainment, Jones and Castro Espin were greeted with roaring approval for their messages of hope and support for Cuba's LGBTQ+ communities. The following day, Jones presented a display of two panels of the Names Project Quilt that featured memorials to Cubans who had died from AIDS-related illnesses. On our last day in Havana, we visited Proyecto Memorias — the Cuban AIDS Quilt — where an unveiling ceremony was held and we talked with staff and patients about the healing power of the quilt and created a new bond and made new friends.

On the day of the original conga, we followed the news as a spontaneously called alternative conga marched to one of Havana's public squares. Although the unauthorized march was quickly dispersed by authorities and some of the organizers and participants arrested and later released, it seemed to our American eyes that there was hope in the willingness of this group to stand up and be seen and heard. It demonstrated to the world that the spirit of Cuba's LGBTQ+ people was unbroken. That spirit will be tested in two years when there will be a referendum to update Cuba's Family Code in which activists hope to see inclusion of the language establishing marriage as "the union of two people."

This week the Trump administration further reversed the engagement policies of the Obama era by eliminating "people to people" visits, banning group tours and cruise ships from going to the island. As a humanitarian aid provider, RWF is still permitted to travel to Cuba, and we will return to Cuba next year, from May 6-16. We hope to be marching in the conga and to see the campaign for marriage equality in full swing. This is a time for a revolution for equality and justice — and Cubans know a great deal about revolutions. We stand in solidarity with our LGBTQ+ brothers and sisters in Cuba and around the world.