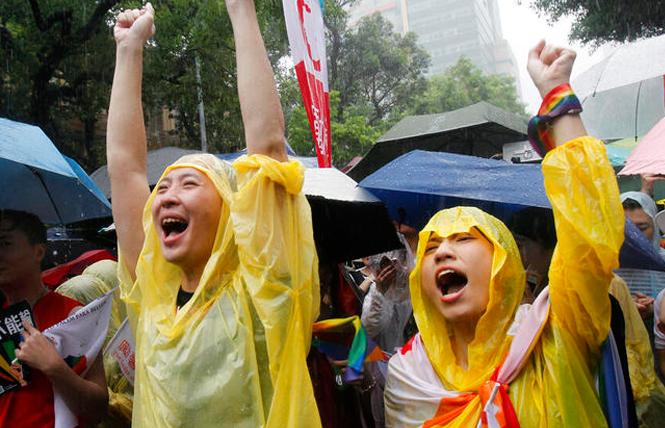 Following the Taiwanese legislature's approval of same-sex marriage May 17, couples plan to tie the knot Friday.

The weddings will mark Taiwan's watershed moment becoming the first country in Asia to legalize same-sex marriage and the first day when couples will be allowed to marry May 24.
"We have married before, but this time it is for real," Liang Tsung-hui, 35, who married her partner of 12 years, Chu Pei-syuan, 32, in Canada in 2012, told Reuters.

This Friday also marks the deadline given by Taiwan's constitutional court for lawmakers to pass legislation legalizing same-sex marriage.

LGBT advocates didn't miss the fact that the bill was approved exactly a week before the court's 2017 ruling declaring same-sex marriage unconstitutional would automatically go into effect.

For two years, lawmakers have struggled over passing legislation to comply with the court. Last November, voters threw another wedge into the debate passing conflicting referendums that directly went against the court.

Reuters reported that Taiwanese lawmakers believe that the current law respects the referendums and the court's decision.

The bill is limited in its scope, restricting marriage between binational same-sex couples and adoption.

"The fight is not over, but we will continue from this brand-new start," Taiwan Alliance to Promote Civil Partnership Rights Executive Director Victoria Hsu, who plans to register her marriage with her partner of six years when the bill takes effect Friday, told CNN.

President Tsai Ing-wen is expected to sign the bill soon.

Tsai, who has been a marriage equality supporter, tweeted her praise of the passage of the bill: "On May 17th, 2019 in #Taiwan, #LoveWon. We took a big step toward true equality, and made Taiwan a better country."

LGBT advocates have been critical of the president and her party, the Democratic Progressive Party, for caving under political pressure from conservatives and not passing same-sex marriage and other LGBT protections sooner.

The new law could impact her 2020 re-election bid.

Reuters reported that the anti-same-sex marriage group Coalition for the Happiness of Our Next Generation warned that voters would "strike back" during the next election.

The People's Daily, the communist propaganda paper, tweeted, "Local lawmakers in Taiwan, China, have legalized same-sex marriage in a first for Asia," with an animated image of three rainbow couples with the caption "love is love."

"Wrong! The bill was passed by our national parliament and will be signed by the president soon. Democratic Taiwan is a country in itself and has nothing to do with authoritarian China," Taiwan's Foreign Minister Joseph Wu tweeted back, calling the paper a "commie brainwasher and it sucks."

Taiwan rejects China's claim of the autonomous island democracy as a territory.

Homosexuality isn't illegal in China but it remains taboo despite some growing social acceptance in recent years. China continues to censor LGBT content and themes in media and online and imprison LGBT artists.

Xiaogang Wei, who heads the Beijing Gender Health Education Institute, told CNN the bill was a historic moment for Asia and the global LGBT movement.

"It will have a very positive impact on China's LGBT community, offering us a lot of hope," said Xiaogang, noting Taiwan shares a "cultural tradition" with China.

Sara Canning had planned to marry McKee, who was killed April 18 while covering a raid on the New IRA compound in Derry.

Northern Ireland is the only region of the United Kingdom where same-sex marriage isn't legal.

Canning, wearing a "Love Equality" T-shirt, asked the crowd of around 8,000 people in Writer's Square, "Why should we not be afforded the same rights in marriage" as the rest of the United Kingdom?

"We pay our taxes, we are governed by the same laws, we live deeply, and we love dearly," she continued, according to the Mirror Herald, "Why should we not be afforded the same rights in marriage?"

John O'Doherty, director of Rainbow Project, added, "I stand today with my better half, the love of my life — angry and frustrated — that another year has passed without our love being recognized as equal under the law."

Protesters called upon British Prime Minister Theresa May to bypass the Democratic Unionist Party and introduce legislation in the British parliament in Westminster.

The DUP is a key ally of May.

The party has blocked attempts to legislate same-sex marriage despite public support. It has also been in a two-year stalemate with Sinn Fein, the large Irish nationalist party.

The Herald reported that Canning said she asked May to legalize same-sex marriage to honor McKee.

May, along with many prominent political figures, condemned McKee's murder and attended her funeral at St. Anne's Cathedral.

The judge denied the government's motion to dismiss the case, according to a May 15 Immigration Equality news release.

Immigration Equality is representing the family, along with pro bono counsel Sullivan and Cromwell, LLP.

U.S. citizen Allison Blixt and her Italian wife, Stefania Zaccari, filed their case against the State Department in January 2018 for refusing to recognize U.S. citizenship of their son, Lucas Zaccari, 4, because Zaccari is the birth mother.

The couple wants to return to the U.S. with Lucas and his younger brother, Massi, who was carried by Blixt and has birthright U.S. citizenship, but they haven't been able to because Lucas wasn't granted U.S. citizenship. Instead, the family continues to live in London.

"Though we wish we never had to fight this battle, we are relieved and reassured that our case is moving forward," said Blixt in the release.

The couple is one of two who have sued the State Department over birthright citizenship for their children.

In February, a federal judge ruled in favor of binational couple Andrew Dvash-Banks and Elad Dvash-Banks on behalf of their young son, Ethan Dvash-Banks.

The judge recognized Ethan Dvash-Banks' birthright citizenship, "stating that the law doesn't require a biological connection between a married U.S. citizen and their child to pass on citizenship," according to the release.

The State Department appealed the Dvash-Banks ruling to the 9th U.S. Circuit Court of Appeals this month.