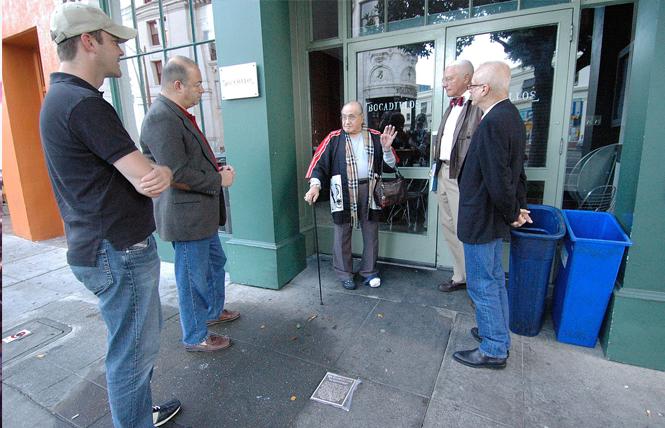 Standing in front of the site of the Black Cat bar in October 2013, Jose Sarria, center, reminisced about his time at the bar to, from left, an unidentified man, Don Berger, John Newmeyer, and then-reigning Emperor Michael Dumont. The occasion was the installation of a plaque, seen here in the sidewalk, honoring the significance of the bar to San Francisco's LGBT history. Photo: Rick Gerharter

LGBT community leaders across the Golden State launched an effort to see Sarria be named to the hall in 2015 due to it being the 50th anniversary of the Imperial Court System. Sarria established the court in San Francisco, and it became a major LGBT philanthropic group throughout North America.

This week San Diego resident Nicole Murray Ramirez, who was elected an empress of the Imperial Court in 1973 and currently holds the title of Queen Mother I of the Americas, Canada, United States, and Mexico, informed the Bay Area Reporter that he had first submitted a nomination on behalf of Sarria in September 2013.

A number of San Diego leaders also sent in letters in support that fall, said Ramirez, as well as the national LGBTQ Victory Fund. With those entreaties ignored, they redoubled their efforts two years later in hopes that the court system's golden jubilee would provide added weight for why Sarria deserved to be included in the hall.

With Newsom's election last November, friends of Sarria have renewed their efforts to see him be honored in such a way. A trio of members of the Legislative LGBTQ Caucus — chair gay state Senator Scott Wiener (D-San Francisco), vice chair gay Assemblyman Todd Gloria (D-San Diego), and lesbian state Senate Speaker Pro Tempore Toni Atkins (D-San Diego) — is co-chairing the campaign and recently had a positive discussion with Newsom about why Sarria deserves such recognition.

Supervisors Aaron Peskin, Vallie Brown, Catherine Stefani, Sandra Lee Fewer, Norman Yee, and Gordon Mar all signed on as co-sponsors of the resolution, which hailed Sarria for being "a vocal critic of the criminalization of queer people and queer meeting places, and would promote a groundbreaking sense of gay pride and positive gay identity in performances at gay establishments such as the Black Cat Cafe in North Beach." 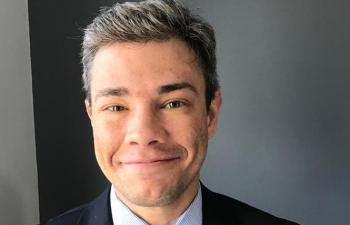 For a second time Henry Sias failed to survive the Democratic primary for a seat on the Philadelphia Court of Common Pleas. The attorney, who lived in Antioch in the East Bay in 2000, had first run for the Pennsylvania bench two years ago.

This year Sias was aiming to be one of the six candidates to survive the May 21 contest in order to advance to the general election in the fall. Due to the city's heavy Democratic electorate, the party's sextet of judicial candidates are all but assured of winning the seats.

Based on the unofficial returns Wednesday morning, Sias came in 10th place out of 25 candidates with 4.60% of the vote. While disappointed with the result, Sias in a Facebook post focused on the example he had set for other transgender men, especially adolescents, by being an out and proud candidate.

"Waking up today, it's tough to see that the election results were not what we hoped for. But there is so much to be proud of," wrote Sias. "In the history of our city, a trans man has never received the support of an institution like the Democratic Party, until we did. Never before had a trans man's candidacy for Philadelphia judge been taken seriously, until we did."

He added that he was proud of the campaign he ran since "transgender men will be able to stand a little taller in Philadelphia today because of all of the work that we have done, and the justice system will be closer to recognizing that trans people will not be marginalized."

Wiener, who was elected caucus chair in January, told the Political Notebook that the seven-member group did so to be more inclusive.

"We discussed it and decided it would be more reflective of the community," he explained.

Web Extra: For more queer political news, be sure to check http://www.ebar.com Monday mornings for Political Notes, the notebook's online companion. This week's column reported on two CA LGBT bills being shelved until 2020.