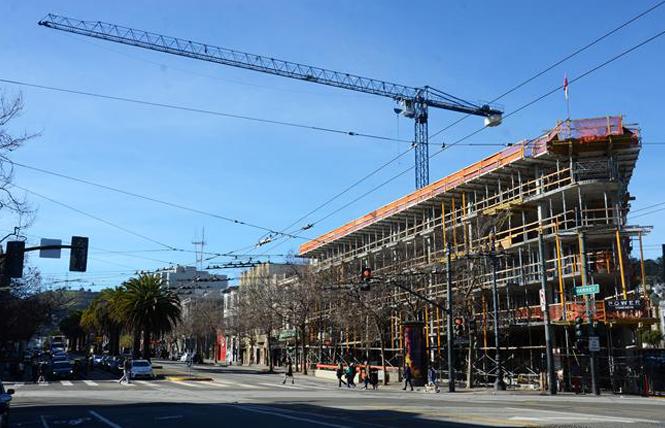 Construction continues on housing at the intersection of Church, Market and 14th streets, as shown in this 2018 file photo. Photo: Rick Gerharter

Last week the chair of the Senate Appropriations Committee decided to unilaterally postpone my housing bill, Senate Bill 50 (the More HOMES Act) without holding a vote. If this decision stands, then SB 50 will have to wait until January 2020 to be eligible for a vote. This delay makes no sense. Our housing affordability crisis demands action today. Too many people — including many LGBT people — are struggling under California's massive housing shortage now. We need action now.

California's failed approach to housing — a system where we allow cities to minimize or stop new housing construction — has led to a massive housing deficit. California's housing shortage is 3.5 million homes, which is equal to the combined housing shortage of the other 49 states. Yes, California has one half of the entire nation's housing shortage. We rank 49 out of 50 states in homes per capita. Since 1960, California's population has nearly tripled, while our annual housing production has declined by about 75%.

This severe problem is pushing people into homelessness, poverty, and mega-commutes, is forcing working families out of their communities and out of the state entirely, and is undermining California's climate goals by forcing people to drive long distances. Our inability as a state to build more housing is having alarming consequences today. In fact, the same day that SB 50 was delayed, cities throughout California released their new homeless counts. Sadly, but not shockingly, in San Francisco we saw a 17% increase in our homeless population and a 19% increase in our unsheltered population. Other places throughout our state saw an even larger increase, for example, 30% in Santa Clara County and 23% in San Bernardino County.
To say we can wait until next year to take bold steps on housing is to ignore the very clear facts and human suffering we are seeing on our streets today.

This restrictive zoning dramatically limits how much housing can be built and forces more and more sprawl development far away from job centers. SB 50 addresses this problem by legalizing more housing exactly where it should be: near jobs and transit.

California's housing shortage also undermines our state's efforts to combat homelessness. If we are serious about addressing homelessness, we must also ensure that people are able to remain housed in the first place. Restricting new housing increases rents and creates more displacement by intensifying the demand for a limited housing supply. SB 50 would lead to more housing overall and would also increase the amount of housing we have for low-income residents.

The reality that higher housing costs leads to more homelessness is particularly important for our LGBTQ community. Countless studies have shown that LGBTQ individuals make up a disproportionate percentage of our overall homeless population. LGBTQ youth, for example, make up 40% of our homeless youth population. While that number is slightly smaller for LGBTQ adults, it remains disproportionally high. Our housing crisis is directly leading to an increase in our homeless population and is making more LGBTQ individuals experience homelessness throughout our state.

LGBTQ people also experience poverty at alarming rates. A recent report found that 20% of LGBTQ people and one-third of transgender individuals in the United States live below the poverty line. This fact directly leads to more housing insecurity for LGBTQ individuals and, especially, LGBTQ seniors. Our community is in greater need of the affordable housing that SB 50 would help to create. By maintaining the status quo, we are condemning more LGBTQ individuals to homelessness, housing insecurity, super commutes, and poverty. This is why the Century Foundation, in an extensive report about housing for our community, recommended getting rid of exclusionary zoning, since such zoning outlaws the housing that we so desperately need. That's exactly what SB 50 does.

We need more housing in San Francisco, the Bay Area, and California as a whole. While there is no silver bullet to solve this crisis, SB 50 is a significant piece of the puzzle.

Senator Scott Wiener represents San Francisco and northern San Mateo County in the California State Senate. He serves as chair of the Senate Housing Committee and of the Legislative LGBTQ Caucus.