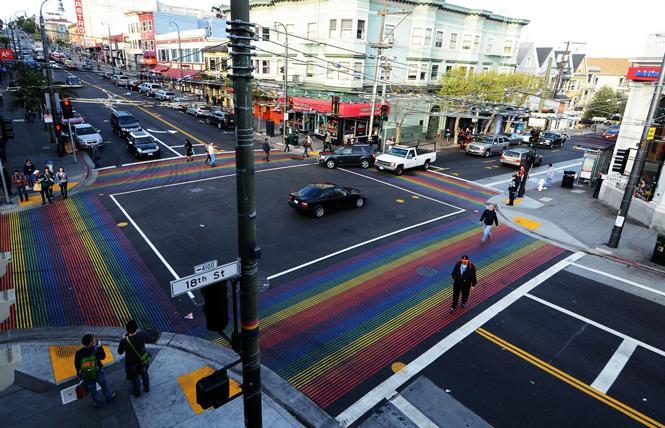 The intersection of 18th and Castro streets, long considered the heart of the San Francisco LGBT community, would be part of the Castro LGBT Cultural District. Photo: Rick Gerharter

A city oversight panel has lent its support to the creation of an LGBT cultural heritage district in San Francisco's Castro neighborhood.

It is now up to the Board of Supervisors and Mayor London Breed to finalize the creation of a Castro LGBT Cultural District. It will be the third such district in the city, as ones in the Tenderloin, highlighting the transgender community, and South of Market, which is focused on leather culture, are already established.

The Castro LGBT district has been talked about for years, with efforts to establish it formally launched in February last year. Last month, gay District 8 Supervisor Rafael Mandelman formally introduced an ordinance to create it.

At its meeting Wednesday (May 1), the Historic Preservation Commission unanimously voted 7-0 in support of the Castro district, with the caveat that it be a community-driven effort. Commissioner Jonathan Pearlman, a gay man and local architect, expressed his full support for the effort, noting that "so many threads of my life" run through the neighborhood.

"Many, many things in my life over the last 30 years connect me to this. This is an excellent thing," said Pearlman, who volunteered with the AIDS Memorial Quilt when it was established out of a Castro-based office and served on the first committee that oversaw the now defunct Pink Saturday parties that had been held in the Castro on Pride weekends in late June.

Commissioner Kate Black, who volunteered with an AIDS organization based in the Castro, recalled encountering decades ago a young man one night who was crying on the stoop of the nonprofit's building, which was then painted in the colors of the rainbow flag. He had fled his hometown after being beaten up by football players and kicked out by his family, she said, and came to the Castro seeking a safe place to live.

"I hope the creation of this district makes the Castro a sort of mecca even more well known so that another kid - like the one I met almost 30 years ago — they know they have a safe place to go," said Black.

Beginning in the early 1970s the neighborhood in the heart of the city, then known as Eureka Valley, began attracting LGBT residents, most notably the late gay supervisor Harvey Milk, who owned a camera store on Castro Street. It continues to be home to multiple gay bars and local nonprofits serving the LGBT community.

But concerns about the longevity of the area being a haven for LGBT people have grown over the last decade as the city's housing prices have skyrocketed and a number of LGBT-owned businesses in the Castro have shuttered. In addition to seeing more non-LGBT people move into the district, other issues that have beleaguered the neighborhood in recent years include homelessness, income inequality, and a loss of cultural and racial diversity.

"Sadly, we don't have a Pink Saturday in Castro anymore and Halloween in the Castro no longer exists," noted Shaun Haines, a gay man who is a member of the working group for the cultural district.

The San Francisco native sought solace in the Castro in his late teens after his family threw him out for being gay. He told the commission members that he got involved with the cultural district in order to ensure that other LGBT people seeking a safe haven can turn to the Castro as he once did.

"We must act now because we have a lot of great plans for our future in the Castro," said Haines.

Kathy Amendola, a lesbian and owner of the Cruisin' the Castro tours, said the Castro and its LGBT community have had a global impact that is worth preserving.

"We refuse to be invisible and, with your help, we will have one of largest LGBT cultural districts in the world," she said.

"The Castro doesn't exist in isolation," noted GLBT Historical Society Executive Director Terry Beswick, who calls the neighborhood home and has been facilitating the community meetings to form the district. "We are existing within the larger city. We are experiencing the same socio-economic pressures as other communities around the city."

Mandelman told the B.A.R. last month that he wants to see the Castro cultural district be approved by city leaders come July in order for it to be eligible for the next round of hotel tax money designated for such districts. Due to the passage of Proposition E last year, nearly 1.5 percent of the money from the 8% base hotel tax that the city already collects is dedicated to arts and cultural functions.