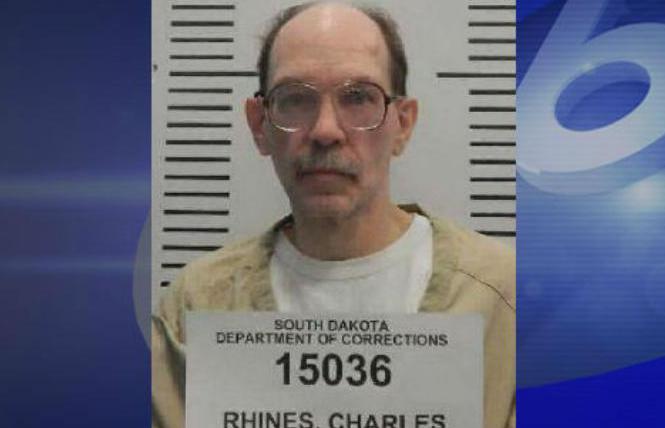 In an action one civil rights lawyer called "a deeply disturbing message about the value placed on LGBTQ lives," the U.S. Supreme Court on Monday refused to hear an appeal from a man on death row who said anti-gay bias motivated his jury's decision to give him the death penalty.

According to the appeal, some jurors said that, because Charles Rhines is gay, a life sentence in prison with other men would not be a punishment.

Just two years ago, the Supreme Court intervened in a case where there was evidence of anti-Hispanic bias in a jury's deliberation of sentencing.

Rhines has been on death row since 1993, when a jury found him guilty of stabbing to death a 22-year-old employee of a Rapid City, South Dakota, doughnut shop Rhines was robbing. Rhines repeatedly stabbed his victim, even as the young man pleaded for his life. Under South Dakota law, a person convicted of first-degree murder can be given the death penalty if the offense was "outrageously or wantonly vile, horrible, or inhuman in that it involved torture, depravity of mind, or an aggravated battery to the victim."

Rhines' attorneys made no claim of jury bias in their first three motions for appeal, but did so on their fourth and fifth claims. Attorneys for South Dakota argued that Rhines' claims of jury bias were supported only by "dubious evidence that has never been subject to judicial review."

But the Rapid City Journal reported there were sworn affidavits from jurors, saying bias played a role. According to the paper, one juror said, "If he's gay, we'd be sending him where he wants to go" by sentencing Rhines to life in prison.

Lambda Legal Defense and Education Fund, the National Center for Lesbian Rights, GLBTQ Legal Advocates & Defenders, and the Human Rights Campaign all signed onto a brief to the Supreme Court arguing that the death sentence in this case constituted a violation of the Sixth Amendment right to an impartial jury.

They said their concern was to defend the right of an accused person to have an impartial jury where bias based on sexual orientation could "play no part in jury decision-making, and especially in the determination of whether a person lives or dies." In such cases, they said, "litigants must be allowed to present evidence of bias based on sexual orientation to the court."

"The history of discrimination against lesbian, gay, and bisexual people in nearly every aspect of life illustrates the need to safeguard against sexual orientation bias in our nation's judicial system," said the brief.

The brief urged the Supreme Court to allow the trial court to take a look at the jury deliberations in Rhines' trial and sentencing. It said "there is disturbing evidence that, if credited, shows the jury sentenced Mr. Rhines to death in significant part because he is gay. Yet Mr. Rhines has never been allowed to present this evidence to a court."

The groups pointed to a Supreme Court decision in 2017, Pen?a-Rodriguez v. Colorado. In that case, the court said that when there is clear evidence that a juror relied on racial stereotypes or animus with regard to a defendant, a trial court should be able to review jury deliberations.

The Supreme Court's denial of Rhines' appeal means it will not require a similar safeguard for stereotypes or animus based on sexual orientation in jury deliberations. There was no indication of dissent in the order. But, interestingly, just three days earlier, the court's four liberal-leaning justices dissented from the court's refusal to uphold a stay for a death row inmate in Alabama who sought a less painful means of execution because the man missed a deadline for making his request. Justice Stephen Breyer asked the majority to discuss the matter in conference the next morning, but the majority refused.

Speaking for the dissent (which included Justices Ruth Bader Ginsburg, Sonia Sotomayor, and Elena Kagan), Breyer wrote, "To proceed in this way calls into question the basic principles of fairness that should underlie our criminal justice system. To proceed in this matter in the middle of the night without giving all members of the court the opportunity for discussion tomorrow morning is, I believe, unfortunate."

"The Supreme Court's silence in the face of explicit, anti-gay bias [in the Rhines appeal] sends a deeply disturbing message about the value placed on LGBTQ lives," said Ria Tabacco Mar, a senior staff attorney for the American Civil Liberties Union, which led the brief joined by the LGBT groups. "As Chief Justice [John] Roberts wrote in a case involving racial prejudice, when bias plays a role in the decision whether to sentence someone to death, that is a 'disturbing departure from the basic premise of our criminal justice system: Our law punishes people for what they do, not who they are.' The evidence of anti-gay bias in Mr. Rhines's case challenges that basic premise."

The Supreme Court's denial of review leaves Rhines as one of two men on death row in South Dakota. A date for his execution has not been set. A spokesperson for his attorneys said Rhines still has litigation pending in the 8th U.S. Circuit Court of Appeals "on whether his expert is allowed to see him in the prison to prepare a report for his clemency petition."

In other Supreme Court news, the high court has still not indicated whether it intends to review any or all of three cases testing whether Title VII of the Civil Rights Act can be read to prohibit sexual orientation discrimination in the workplace. It has not yet decided whether to take a case testing the right of a business to deny service to a same-sex couple based on the business owner's professed religious beliefs. And it has not indicated whether it will hear the appeal of students challenging a school policy that allows transgender students to use the high school restroom and locker room consistent with their gender identity.

All five cases are on the court's list to consider in private conference Thursday, April 18. The court is expected to release its next orders list, accepting or declining appeals, Monday, April 22.