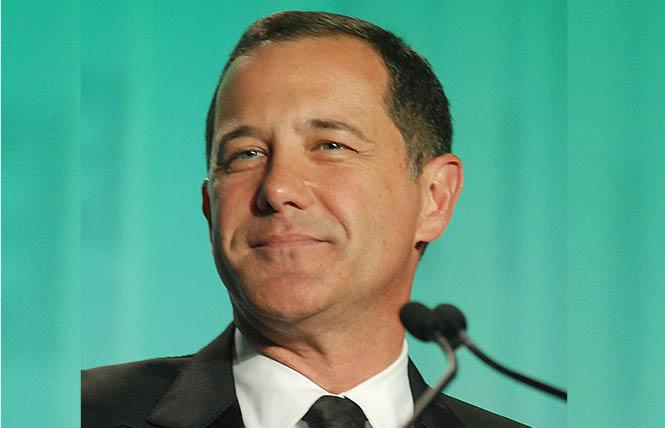 "The opportunity to lead the 2020 convention is a tremendous honor and I'm prepared to hit the ground running," said Solmonese, who most recently served as the transition chair of Planned Parenthood Federation of America. "There is no better time than now to be a Democrat and next summer we will showcase the ideals and diversity that make our party, the city of Milwaukee, and our nominee special to the American people."

He oversaw HRC from 2005 to 2012 during the time when the national debate over same-sex marriage rights was the focus of legal fights in numerous states, including California, and in the federal courts. While Solmonese led the organization's successful fight to repeal the military's homophobic "Don't Ask, Don't Tell" policy, he also came under withering attack from the LGBT community for not supporting a transgender inclusive Employment Non-Discrimination Act in 2007. HRC's stance led to its San Francisco gala being picketed by local activists and LGBT officials.

Fast forward 12 years and congressional Democrats are leading the charge to pass a sweeping federal LGBT rights bill dubbed the Equality Act that would ban anti-LGBT discrimination in employment, housing, and other areas. While it is unlikely to pass out of the U.S. Senate, the legislation is expected to be an issue asked of the numerous Democrats seeking their party's nomination.

As gay Democratic Congressman Mark Takano of Riverside told the Bay Area Reporter this month, LGBT rights are a top priority for the party and need to be at the heart of their campaign policy platforms.

The HRC Foundation and the UCLA Luskin School of Public Affairs, in fact, are co-hosting a forum for 2020 Democratic presidential candidates October 10, 2019 — on the eve of National Coming Out Day. During Solmonese's time with HRC, it's foundation twice hosted presidential forums in 2004 and 2008.

This year the gay mayor of South Bend, Indiana, Pete Buttigieg, is seeking to become the first out presidential candidate of one of the country's two main political parties. And nearly all of the other major contenders seeking the Democratic Party's nomination are supportive of LGBT rights. This Saturday, March 30, one of the candidates, New Jersey U.S. Senator Cory Booker, will address HRC's Los Angeles dinner fundraiser.

The LGBT community is expected to have a significant presence at the convention next year. From speakers to delegates, LGBT Democrats are likely to play integral roles.

In announcing the selection of Solmonese to head the planning efforts for the convention, Democratic National Committee Chair Tom Perez praised the "wealth of knowledge and expertise" he brings to the high-profile role.

"Joe Solmonese will be an asset in leading our convention team. He brings a wealth of knowledge and expertise to this role and will be instrumental in ensuring we have a successful event," said Perez. "We chose Milwaukee because the city embodies who we are as a party, and under Joe's leadership, I'm confident those values will be at the forefront as we celebrate our nominee and prepare for the general election."

Perez added, "I am thrilled to have him as a part of the team and look forward to a unifying convention that will put our nominee in the best possible position for victory in November 2020."

For the past several years, Solmonese has been the managing director and founding partner of Gavin/Solmonese, where he directed the firm's corporate strategy, public affairs, and policy practice. He previously served as transition chair of Planned Parenthood Federation of America, where he was responsible for overseeing the day-to-day operations of the national office following the departure of Cecile Richards.