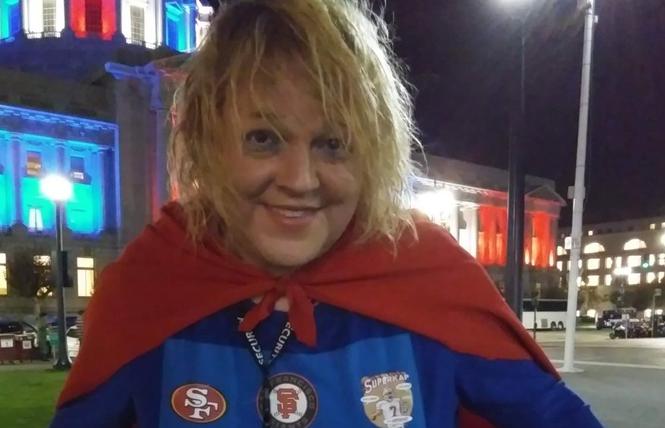 San Francisco will revise its policies surrounding public protests on the steps of City Hall after a transgender woman sued the city when she was denied her right to demonstrate.

Shawn Sunshine Strickland, a homeless woman known as the "Supergirl of San Francisco" for her ubiquitous superhero attire, filed a federal lawsuit against the City and County of San Francisco in September 2018. The complaint, filed in U.S. District Court for the Northern District of California, cites two specific incidents from 2017 in which sheriff's deputies, who provide security at City Hall, forced Strickland off the steps, claiming she didn't have a permit to protest. She sued over what her lawyer Donald Wagda called the city's "unconstitutional policies." The lawsuit is currently pending.

The City Hall Steps Use Policy states that any person or group must have an approved permit in order to protest. The new policy, according to Wagda, will no longer require groups under 15 people to have a permit.

"[The city] knew that we would be able to force the change if they didn't do it voluntarily," Wagda told the Bay Area Reporter this week. "The law is clear and they understand that their policy law is inconsistent with case law."

"Supergirls are all about justice and fighting the good fight," Strickland said in a statement. "As 'The Supergirl of San Francisco,' justice is my mission, and the battle continues! Onward and upward!"

The city attorney's office did not provide the B.A.R. with its amended policy, or say when the new policy would be implemented, but did confirm that it is being revised.

"The city is in the process of revising the policy. In the interim, the current policy will not be enforced with respect to issues identified in this lawsuit, like requiring a permit for a single person or small group. Larger groups still need a permit," said John Cote, communications director for City Attorney Dennis Herrera.

Wagda said he was given a revised draft of the policy in February, but that the city has not given him any updates since then. The draft included an amendment that allows groups of any size to hold a protest if it is correlated to a breaking news event that occurred 24 hours before the protest is held. The ban on using the steps as a performance space is also being eliminated, something the lawsuit called "unconstitutionally vague" because the government provides no guidance on "what form of expressive content constitutes an impermissible performance."

Though Wagda is not sure what the final policy will be, his client's lawsuit also challenges an aspect of the current policy that allows City Hall building management "to pre-empt and/or cancel any approved permit at anytime," states the suit.

Something the revised policy will retain, Wagda explained, is the two business day timeframe that the city has to respond to completed permit applications and a permit for groups over 15 people.

"Civil rights are not self executing," Wagda said in an interview. "The government passes laws that are unconstitutional, and we have to challenge those policies. The updated policy will remove barriers that interfere with the capability of people to come out and speak their minds in a place where they are likely to be heard."

The first of the two incidents listed in Strickland's lawsuit happened in April 2017. Strickland held a one-person religious demonstration on the City Hall steps to protest what Strickland called the failure of the San Francisco Police Department to investigate a physical attack she said she experienced by a transphobic employee at Dignity Health St. Mary's Medical Center.

She had a protest banner, some belongings, and poured olive oil and salt on the steps to create a "spiritual circle." Two sheriff's deputies approached Strickland and disrupted her demonstration.

"During a very brief initial conversation with Ms. Strickland, Deputy Barry Bloom violently grabbed her by the wrist and otherwise attempted to intimidate her into ending her demonstration and leaving the scene immediately, saying "time for you to go," states the claim. Bloom is also named in the lawsuit as a defendant, as are two other sheriff's deputies, Suzette Humphrey and Juan Garrido.

According to the lawsuit, Bloom also crumpled up Strickland's banner and took her backpack. Strickland was recording the incident when Bloom seized a small cart she had, which held her recording cellphone, and pointed the cellphone camera away in order to obstruct its view of the incident.

In December 2017, Strickland came to the steps again to pay her respects to the late mayor Ed Lee, who died that same month. Bloom misgendered her and forced her off the steps, according to the lawsuit.