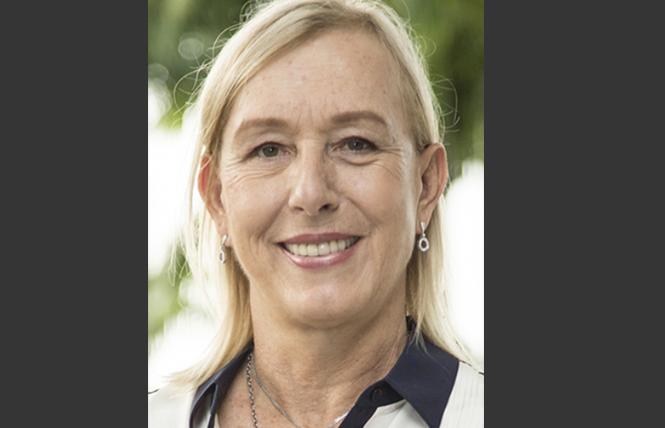 A week ago, I wrote that lesbian tennis great Martina Navratilova was wrong when she said transgender women competing in women's sports were cheating and that not even she believed that. (See February 28 JockTalk, "On Martina, Caster, and wrestlers who wouldn't wrestle.")

Now, she has written the same thing on her personal website.

"I know that my use of the word 'cheat' caused particular offense among the transgender community," Navratilova wrote on her site, http://www.martinanavratilova.com, in reference to a newspaper op-ed piece she had written opposing the inclusion of transgender women in sports, calling that inclusion "insane."

In her "update" essay, she expressed shock at the backlash she has received from the LGBT community; disbelief at the support she had gotten from folks she called "unwelcome bedfellows," such as transphobic actor James Woods and the conservative Washington Examiner (she was silent on her endorsement from British commentator Piers Morgan); and generally tried explaining that her objective was to prompt a rational, more nuanced, scientifically-based conversation seeking fair policies — all the while doubling down on preconceived positions and drizzling more accelerant on the flames.

She used Lance Armstrong's abuse of anabolic steroids in the Tour de France (we're shocked to learn there is drug cheating in cycling!) to reinforce the fear of men temporarily declaring they are women just so they can win in women's sports. I've heard of "connecting the dots," but that's like connecting one of my freckles to Alpha Centauri. She writes about solving sports' "transgender problem" and warns those who have called her stance transphobic that "communists tried to shut me up 45 years ago and look how that worked out."

Navratilova is right about this: conversations and policies regarding gender in sports have almost always been emotionally charged and driven by politics, preconceptions, and lines drawn in the sand. The science can be confusing and even contradictory — when and if science is even considered. Advocates cherry-pick the studies and statistics they choose to cite. Life experiences — or lack thereof — can make it difficult for people to step out of their own skins and understand someone else's viewpoint. There's nothing new in that. The problem is, every time Navratilova has written — on Twitter, in newspapers, or on her website — about transgender inclusion, she has repeated those conversational flaws rather than risen above them.

Tennis was Navratilova's ticket to a better life. It got her out of Czechoslovakia to the United States, where she was able to become rich and build a life as an outspoken, successful, and confident lesbian. Decades before we knew Serena Williams, Navratilova faced public ridicule by people who were made uncomfortable by a successful female athlete with such rippling muscles, such fierceness, such talent, and such focus. We'd never seen a tennis player quite like her.

Battling through such prejudice and obstacles could have made her sympathetic to the plight of transgender people struggling to be accepted for the athletes they are, with all of the disadvantages they carry with them every day — but apparently not.

Navratilova raises a question of how inclusive recreational sports should be. There should not even be a question about that: they should be completely inclusive. Recreational sports are not about winning or losing, or about putting on a show for spectators. They are about participation. Period. As the Golden Gate Women's Soccer League stated in its policies in January, the league "is a women's league that welcomes cisgender women, intersex, transgender, and nonbinary individuals."

When you get to professional and elite sports, the stakes change, as do people's attitudes. Policies are driven less by athlete concerns and more by efforts to manage public perceptions, while maximizing revenue. Performance enhancing drugs are banned and vilified (wink, wink, nudge, nudge), but young female skaters can get nose jobs to enhance their beauty and all athletes can get eye surgery to "correct" that which nature gave them and allow them to see targets and balls better.

Those are medically necessary choices to gain competitive advantages.

"I have always, and will always be, a champion of democracy, equal rights, human rights, and full protection under the law for everyone," Navratilova wrote. Referring to being called transphobic or a TERF (trans exclusionary radical feminist), she wrote, "When I talk about sports and rules that must be fair, I am not trying to exclude trans people from living a full, healthy life."

A full, healthy life. Presumably that would include the right and the opportunity to play sports.

"All I am trying to do is to make sure girls and women who were born female are competing on as level a playing field as possible within their sport," Navratilova wrote.

She is silent on what she is trying to do to, or for, women who were told when they were born that they were males.