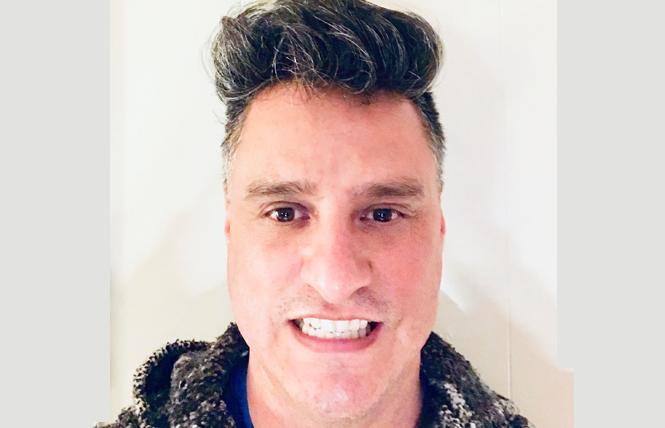 A gay man claims he was discriminated against at the Mexican Consulate in San Jose when a clerk refused to change his passport to reflect his married name.

Cesar Rowe-Pasos, 42, lives in Santa Cruz and was granted a green card earlier this month, after arriving in the United States 14 years ago.

He planned to visit family in Mexico, but needed to renew his passport first. Following the advice of his immigration lawyer, he went to the consulate on February 11 with his original green card, marriage certificate, driver's license, and application for renewal.

"The lady started to ask me basic questions like where I live and then asked if I had a phone number for a relative she could contact. I said 'Yes, Greg Rowe, my husband,"' Rowe-Pasos told the Bay Area Reporter in an interview last week.

After learning Rowe-Pasos was married to a man, the clerk's attitude and body language began to change, Rowe-Pasos said.

"She was shocked," he said. "Her body language changed when I said 'husband.'"

The clerk then proceeded to process Rowe-Pasos' passport renewal application, he said, and eventually gave him back his documents. When he inquired about having his name changed on his passport to his married name, the woman said she couldn't do that because Rowe-Pasos' documents weren't original. She did renew his passport, but did not change his last name. Rowe-Pasos paid $74 for the renewal.

Rowe-Pasos' immigration lawyer, Janely Mendoza with the East Bay Community Law Center, though not present at the consulate, confirmed that Rowe-Pasos had an original passport, driver's license, green card, and marriage certificate.

"He's very diligent in reviewing everything that is required, and double checked with his attorney at the time that he took everything necessary," Mendoza told the B.A.R.

Mendoza previously represented Rowe-Pasos when he was working on becoming a U.S. citizen when she was employed with Asian Pacific Islander Legal Outreach in San Francisco.

She said it sounded strange that the clerk would renew Rowe-Pasos' passport if he did not have original documents, like the consulate clerk claimed.

"If the issue is missing original documents, why would she issue a renewal," Mendoza said. She also said that oftentimes rules for changing names on a passport and its renewal can be subject to the rules of that person's home county. Although she did not know the specific rules Mexico had pertaining to passport name changes, she said it could have influenced the consulate's decision to deny his name change, but that she still finds it peculiar that the clerk would renew a passport without all original documents present, as the consulate worker claimed.

"I have never heard of this happening at a Mexican Consulate," she said, adding that the majority of her clients are from Central America.

The Mexican Consulate's website does not include specific instructions or which documents are required for renewing a passport or changing a name on one. The website states, "The procedure for issuing passports at the Consulate's headquarters is provided by appointment only."

The Mexican Consulate did not comment specifically about Rowe-Pasos' incident, but said, "The Consulate General of Mexico in San Jose values the inclusion and non-discrimination and we consider our workplace as 'Secure Space.' In fact, the consulate supports annually campaigns such as 'Spirit Day,'" stated the email from Consul General Juan Manuel Calderon Jaimes, referring to the annual day against bullying and in support of LGBTQ youth.

The statement also explained that if someone with a Mexican passport wishes to change their name on the passport, the new name will only be published in the corresponding section of the passport located in the data sheet of the passport.

"If the applicant for a Mexican passport is married, regardless of whether the marriage is between people of the same sex, and want the spouse's last name to be entered in the passport, they must submit a certified copy of the Mexican or foreign marriage certificate.

It continues, "It is important to note that the legal last name of a Mexican national can't be changed and will be exactly as written in the birth certificate, what is allowed is to incorporate the spouse surname in the corresponding section in the passport."

The statement also cites "Article 30 of the Mexican Passport Law," which says the only document required for a name change is a marriage certificate.

Rowe-Pasos, who works as a driver for Uber, said he has had to postpone his trip to Mexico because he feels it's too dangerous to travel with a green card and passport that do not have matching surnames. He and his husband have made an appointment with the Mexican Consulate in San Francisco to see about getting the name change and hope not to have to pay another fee.

The incident at the San Jose consulate left Rowe-Pasos depressed and saddened, he said. After being granted a green card after many years of fighting for it, Rowe-Pasos said his experience was unacceptable.

"I have been fighting to be legal and respected for 15 years," he said. "They need to respect the American process. This is California, whether you're gay, straight whatever, people have pride and self-respect. This is California, it isn't Mexico. You can't keep incriminating people and treating us like that."