Jock Talk: On Martina, Caster, and wrestlers who wouldn't wrestle 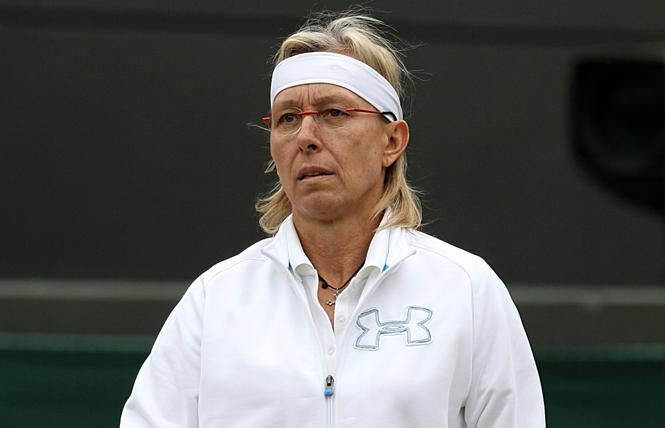 Martina Navratilova is wrong. Transgender women competing in women's sports isn't "cheating." Not even she believes that.

Cheating occurs when somebody intentionally violates rules or laws. That's not what is happening with the increased inclusion of transgender athletes in sports. What's happening is that governing rules are changing and, in general, becoming more inclusive — and that's what Navratilova, a lesbian retired tennis champion, has a beef with.

As to cheating itself, history, especially the history of women and most especially the history of women in sports, shows us that not all cheating is bad. We got women's marathons in the Olympics a helluva lot sooner than we might have otherwise because brave activist women such as the late Patricia Nell Warren made a point of violating the Boston Marathon's exclusion of women decades ago to show they were perfectly capable of running that distance without being overcome by vapors.

Historically, sports have treated athletes who do not fit into a neat theoretical sexual binary with suspicion. Moves to make rules more accommodating of variations in gender and gender identity have met with political pushback, opposing sides wrap themselves in scientific claims, and the debate is currently re-escalating since the International Olympic Committee dropped reassignment surgery as a prerequisite for competition.

Navratilova made her "cheating" statement in a recent newspaper op-ed column. In it she also said that it was "insane" for sports organizations to allow inclusion of transgender women in women's sports. Hey, she certainly has the right to disagree with that inclusion, but that does not make it insane. She and others believe such inclusion is wrong, but the attempt by governing bodies to try to develop policies they believe are inclusive, compassionate, supportive of athletes, and practical is a decidedly rational impulse.

This is not the first time Navratilova has publicly spoken out against the inclusion of transgender women in women's sports. Last year, after Canadian transgender cyclist Rachel McKinnon won a gold world medal in an age-group sprint competition, Navratilova tweeted, "You can't just proclaim yourself a female and be able to compete against women. There must be some standards, and having a penis and competing as a woman would not fit that standard."

When North Carolina was considering legislation a few years back that would restrict transgender individuals to using restrooms that were tied to their assigned gender at birth, proponents of the bill put forward a straw man defense, warning people of a strictly hypothetical threat: heterosexual predators posing as members of the opposite sex to gain access to vulnerable prey. In her recent op-ed, Navratilova theorized about men adopting female identities briefly to reap athletic rewards, and then reverting to their old masculine lives.

"She imagines a nonexistent cisgender man who will pretend to be a trans woman, convince a psychologist and a physician to prescribe hormone therapy, undertake the process for legal change recognition, then wait the minimum 12 months of testosterone suppression required by the current IOC rules, compete, and then change his mind and 'go back to making babies'?" McKinnon wrote in an email to the Associated Press. "No such thing will ever happen. This is an irrational fear of trans women."

Athlete Ally said it has dropped Navratilova from its advisory board. 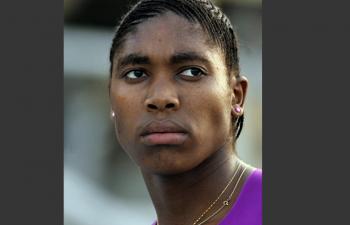 Meanwhile, Olympic gold medalist Caster Semenya of South Africa was in Switzerland last week as the Court of Arbitration for Sport was hearing arguments about whether track's international governing body should be allowed to require women - including those with differences in sexual development - with naturally high testosterone levels to take medically unnecessary hormone suppressants to reduce their testosterone.

A similar previous attempt by the International Association of Athletics Federations was defeated in court and the IAAF was told to come back with more evidence to support its stance. (See May 3, 2018 JockTalk, "Testosterone pseudoscience.") Instead of doing that, the IAAF came up with this new proposed rule that cherry-picked the distances that fall under the testosterone restriction: the 400-meter to 1500-meter races. Any correlation the IAAF had between testosterone levels and winning results occurred at other distances, but for whatever reason the IAAF decided to settle on the middle-distance events it felt were being dominated by Semenya and other runners from Asia and Africa.

You know: not racism, just serendipity.
The court is expected to release its verdict by March 26.

Amid all this fear that women are being made to compete against athletes with "male" advantages, two female wrestlers in Colorado were taking on the boys in the state high school championships - and both won medals.

Colorado high school girls can wrestle - but the state does not offer separate boys and girls competitions. Last Saturday, Angel Rios, a junior at Valley High, and Jasslyn Gallegos, a senior at Skyview High, placed fourth and fifth in the 106-pound weight class, making them the first two girls in state history to reach the medals platform.

"When I was younger, even in 2006, we had problems with sexism and all of that," said Gallegos. "Now it's just not there, the whole 'girls shouldn't wrestle' thing."

"It's really cool to have the first girls place at state in my bracket," Estrada said. "Really cool. Really tough, too. Rios is really tough. She's one of the best in the nation among girls. Same with Jasslyn. She never stops."

And yes, all of that was cool and historic, but here's the Denver Post headline after the first day of the two-day meet: "A Colorado Springs wrestler made history when he knocked himself out of the state tournament rather than wrestle a girl."

Now, wrestlers have double forfeited before. It's not that uncommon, and it simply defies logic to glorify a wrestler for refusing to wrestle.

It is not as though there was a sudden rule change on the eve of the tournament, that girls were being let into a boys-only club at the last second. Girls are eligible to wrestle in the state tournament. Period. Nothing new in the policy.

Last year, Brendan Johnston, of the Classical Academy, forfeited when he was supposed to wrestle a girl in the state consolation matches. This year, he forfeited to both Gallegos and Rios, knocking him out of any chance for any medal.

Colorado will have a girls state competition starting in the 2020-21 school year. California started its first girls state wrestling tournament a few years ago, and I was proud as head coach at Mission High to be the only one in San Francisco to send as many girls as I did boys to state that inaugural year.

But during the regular season, when going against the best wrestlers they can allows wrestlers to hone their skills, boys and girls still often practice with and compete against each other.

I had a freshman who asked me if he could forfeit a match at an in-season tournament, because his next opponent was a girl, and then wrestle a consolation match afterward.

"Sure, you can forfeit," I told him. "And then you can leave this team. What gives us the right to deny an opportunity to anyone else to compete?"
A light bulb went on and he wrestled.

Hey, it didn't grab a headline and it didn't make headlines, but as I've seen that young man grow into a respectful, responsible adult, and a good friend, I think it may have made a difference.