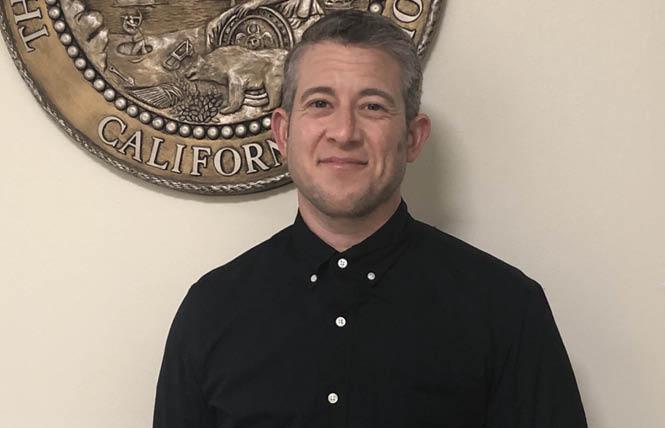 JP Petrucione, Governor Gavin Newsom's director of digital media, is believed to be the highest-ranking transgender appointee in state government.

California Governor Gavin Newsom has made history by hiring a transgender man as part of his administration's communications team. The appointment of San Francisco native JP Petrucione as Newsom's director of digital media is believed to make him the highest-ranking, out, transgender appointee in state history.

Petrucione, 45, had worked for Newsom when he was the mayor of San Francisco as his deputy communications director from 2004 to 2007. The official announcement of Petrucione's hiring — he started January 11 — Thursday coincided with the 15th anniversary of when Newsom ordered city officials to marry same-sex couples shortly after he became mayor.

"Why not come back to work for the man who made marriage possible," Petrucione told the Bay Area Reporter in a brief phone interview when asked about wanting to work for Newsom again. "Gavin is a politician not afraid to do what is right no matter what the consequences are."

As for being the highest-ranking transgender person in state government to date, Petrucione said he welcomes serving as a role model to other transgender people that they can have successful careers. Due to transphobia, many transgender people face discrimination in employment and struggle to find jobs.

"It feels great actually. I think there is a lot of value in being the first in something," he said. "There are folks who may be not out or afraid to transition and I am an example that you can be transgender and be successful."

Equality California, the statewide LGBT advocacy organization, applauded Newsom for appointing Petrucione and congratulated him on the "exciting appointment" in a statement.

"The governor and the people of California will be well-served by his talents and the perspective he brings to work each day as an openly transgender man," stated EQCA Executive Director Rick Zbur. "Throughout history, LGBTQ people — and transgender people in particular — have been denied a seat at the table simply because of who we are or whom we love. But in just one month, Governor Newsom has demonstrated the strength of his commitment to build an inclusive, people-powered administration that reflects the diversity of our great state."

Petrucione had moved to Portland in 2016 to work for Airbnb as its global digital director for public policy but left that position last April. Prior to that he co-founded and was managing partner at Social Stream Media and worked as a consultant at Storefront Political Media in San Francisco.

"They are very, very different worlds," Petrucione said of government and the private sector.

Petrucione has gone by JP since a young age, as his given name was Jennifer and in school there were six other Jennifers in his class. When he started taking testosterone in 2011 he changed his name to Jack Margaret Petrucione.

"I don't think of it as transitioning. I was integrating parts of myself," said Petrucione, adding that, "My family still calls me Jenny. It is part of who I am."

He is overseeing a three-person digital team for the governor. They oversee Newsom's official government social media accounts.

"We use nontraditional media to advance the governor's priorities and policies," said Petrucione, whose salary is $105,000.

As the B.A.R. has previously reported, Newsom has hired a number of LGBT people to his gubernatorial administration. The hires have included lesbians Ana Matosantos as his cabinet secretary and Kris Perry as deputy secretary for early childhood development and senior adviser, and a trio of gay men: Daniel Zingale as senior adviser on strategy and communications, Nathan Click as chief spokesman and director of public affairs, and Jesse Melgar as deputy director of public affairs.