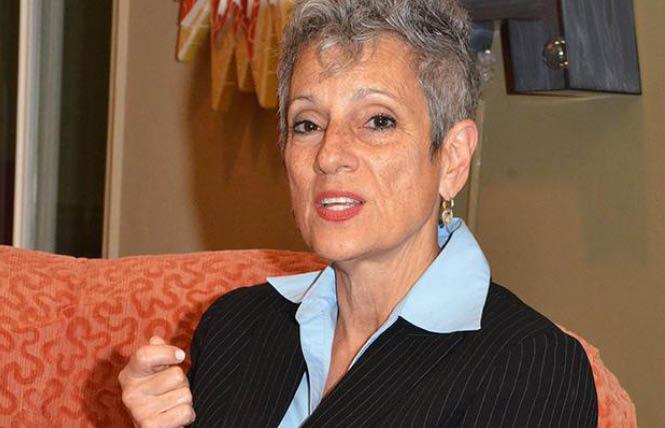 Having fallen short by just 3.2 percent of the vote in her race for a state Senate seat in November, lesbian Palm Springs resident Joy Silver is already laying the groundwork to run again in 2022.

She came 9,228 votes shy of ousting from office freshman state Senator Jeff Stone (R-La Quinta). He prevailed in securing a second term with 51.6 percent of the final tally, for a total of 151,020 votes.

First elected to the Legislature's upper chamber in 2014, Stone is eligible to seek a third and final four-year Senate term in 2022. His 28th District seat represents a large swath of Riverside County, including the LGBT retirement and vacation mecca of Palm Springs and surrounding towns in the Coachella Valley.

Silver is expected to formally announce her candidacy in the coming weeks. In an interview with the Bay Area Reporter last week, she acknowledged that she is looking at a rematch against Stone.

"I am just getting started. I think you understand what I am saying here," said Silver, an expert on aging issues who is now focused on addressing her region's housing needs. "That seat is still held by a Republican. Another 3.16 percent of the vote and we would have turned it blue."

Due to how close the first-time candidate for public office came to winning, Silver has been fielding questions from people asking if she will run for state Assembly in 2020. Palm Springs is within the 42nd Assembly District, which is represented by Assemblyman Chad Mayes (R-Yucca Valley).

He is expected to seek re-election next year, while a number of Democrats are looking to challenge him. Silver said she is not interested in running against another member of her party for the seat.

"I don't want to run against good people," she said.

Instead, she is talking with her family, including partner Atma Wiseman, about running again for the Senate seat. Silver would like to finalize her plans by March, she told the B.A.R.

"People know what I stand for at this point. We just have to focus on bringing a few more people out to vote and we got this," said Silver. "Maybe this time we didn't get there but I am just getting started. And I am going to stand for the same things we all stand for: progressive values and practical solutions."

Stone has a record of opposing LGBT rights in the Statehouse. He earned a 20 percent score on Equality California's 2017 Legislative Scorecard, though he did edge up to 63 percent on the statewide LGBT advocacy group's 2018 report card on how state lawmakers voted on LGBT legislation last year.

His narrow victory last fall should make it clear, argued Silver, that there "is not a mandate for a GOP candidate" to hold the Senate seat.

Her candidacy and possible victory would assist efforts by the Legislative LGBT Caucus — currently at seven members — to recruit LGBT candidates for Statehouse races in order to bolster its ranks. Next year one of the out legislators is termed out of office and another is running for San Diego mayor.

As the B.A.R.'s Political Notebook reported Thursday, the caucus and EQCA are co-hosting the first statewide summit of its kind in Sacramento next month to encourage local leaders to run for Assembly or Senate seats in 2020 or in future elections. Otherwise, come December next year, the number of out state lawmakers could remain flat or fall to six or fewer.

Silver's advice for those thinking of running is to champion causes that can unite constituents behind a campaign.

"Concentrating on issues that bring us all together should be the focus for any candidate," she said. "It is the values we share that unify us."

Victory Fund training
The LGBTQ Victory Institute last week in San Francisco trained 42 LGBT people interested in seeking elective office. The four-day candidate and campaign training featured various sessions on how to run for office, including tips on how to fundraise, create a campaign message, and reach voters.

Ruben Gonzales, a gay man who is vice president of the national group, told the B.A.R. that the training had filled to capacity faster than previous ones. He pointed to the electoral success of several hundred LGBT candidates last year for driving up interest.

"People are inspired and thinking they can do this as well," said Gonzales, 42, who is based in Washington, D.C.

One thing the training educates potential candidates on is being smart about what political office they seek, especially if they are running for the first time. It also prepares them for the "daunting" task of fundraising, noted Gonzales.

The trainings, he added, also help people to focus on "what is my path to victory?"

Karl Frisch, 40, a gay man who is running for a school board seat in Fairfax County, Virginia, signed up for the training to learn how to run a campaign from the perspective of a candidate. A student at UC Berkeley in the 1990s who is a native of Los Angeles County, Frisch in 2002 worked for the Democratic Party of California as a deputy communications director and has held various positions on past campaigns.

But he has never before sought public office himself. Should he win his race in November, Frisch would be the first out LGBT person elected to any public office in his county.

"I have never done call time for donations or cut my turf, figuring out which voters to target. I want to learn those pieces I have always delegated to others on a campaign," said Frisch, whose partner teaches in the school district.

Gay San Francisco resident Michael Nguyen, 37, who chairs the Gay Asian Pacific Alliance, signed up for the training so he could assist other LGBT people who are Asian or Pacific Islander running for office. There have only been a few out API officeholders in the city or Bay Area, and Nguyen hopes queer BART board director Janice Li's victory last fall inspires others to run.

"I think she is a trailblazer for sure," he said. "She proved there is a path to victory and that it can happen."

Born in Chicago to Vietnamese refugees who later moved the family to Texas, Nguyen didn't rule out running for office himself some day.

Fellow San Francisco resident Nick Large, 28, a queer man whose maternal family is Japanese, wanted to participate in the training in order to assist others seeking public office.

"I don't know if I see myself running for office and being a politician," he said. "I am more into public affairs and public policy."

Joe Fuld, 51, a straight ally and campaign consultant based in D.C., has led the trainings for the Victory Fund for two decades. One thing he has noticed about LGBT people interested in serving in public office is many are already on to their second or third career.

"The quality of LGBT candidates is striking. These are people who have already done a lot in their community," noted Fuld.

The main point he stresses during the trainings, said Fuld, is people need to think hard about why they want to run in the first place. Answering that question will help them determine how to articulate to voters why they should support their candidacy.

"It really gives people a chance to think about that," he said of the trainings.

The next training will be held in early April in Houston. Those interested in attending need to submit an application in order to be considered for one of the slots.

For more information and to submit an application, visit https://victoryinstitute.org/trainings/.

Due to the Presidents Day holiday, the Political Notes column will return Monday, February 25.