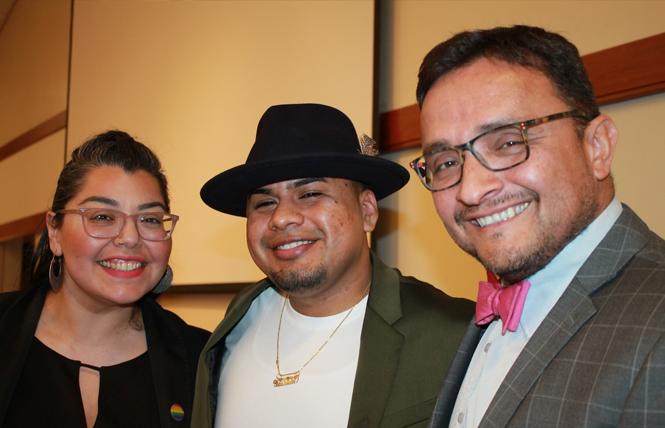 LGBT undocumented immigrants were part of a celebration last week in Silicon Valley.

Headlining the January 25 ceremonies was Yosimar Reyes, who was raised in the South Bay.

The event was hosted by the Santa Clara County Executive Office's Office of Immigrant Relations under its Equity and Social Justice Division. The division is overseen by David Campos, the county's deputy county executive who is a gay immigrant himself.

Campos, a former San Francisco supervisor, fled Guatemala's political and economic unrest in 1985 when he was 14. Like many immigrants since the founding of the United States, he came to the country searching for the American Dream, he told the Bay Area Reporter.

He spoke about the importance of the awards and what they symbolize at a time when President Donald Trump has "declared war on immigrants," he said, and "shut down the government because he wanted to build a wall at the US-Mexico border." (The partial government shutdown ended just hours before the event.)

"I think in that kind of political climate the immigrant communities of Santa Clara County need something positive," he said. "Tonight is a celebration of the positive contributions of immigrants."

Campos explained that the immigrants being honored for their work come from different parts of the world.

Reyes, a 30-year-old queer Latino who was raised on the eastside of San Jose, emceed the ceremonies and entertained guests with quips such as, "I took someone's job. I apologize."

Jose Antonio Vargas, a gay Filipino Pulitzer Prize-winning journalist and Emmy-nominated filmmaker, was to attend but was ill. He recently published a book, "Dear America: Notes of an Undocumented Citizen." A new elementary in his hometown of Mountain View is being named after him this year.

An estimated 40 percent of residents in Santa Clara County are immigrants, according to the county's Office of Immigrant Relations.

The office's research found immigrants in Santa Clara County contributed $77 billion to the U.S. economy in 2014, the most recent statistics available. As of 2015, the office found that immigrants founded 50 percent of the county's 14 Fortune 500 companies. These companies had a combined $393 billion in annual revenues and employed 24,464 people in the county in 2014. The office also found that immigrants were twice as likely to be entrepreneurs than American citizens, with the highest concentration of small business owners (33 percent) living and working in California.

Award recipients
Cindy Chavez, vice president of the Santa Clara County Board of Supervisors, presented Father Jon Pedigo of Catholic Charities with the Cindy Avitia Award for Lifetime Achievement in Activism and Advocacy for Immigrant Rights for his nearly 30 years of social justice work.

The network supports the South Bay's immigrant community. It monitors, responds to, and documents Immigration and Customs Enforcement activity in Santa Clara County. The network of 700 volunteers is a program of People Acting in Community Together.

Maribel Martinez, a queer woman of color who is the director of the county's Office of LGBTQ Affairs under Campos' oversight, said the communities should work in solidarity.

She noted Roxsana Hernandez's story as an example of immigrants who need protection. Hernandez, a transgender woman, came to the U.S. escaping persecution in Honduras and died in ICE custody.

Reyes said that his choice to be out both as an undocumented immigrant and a queer person provides undocumented and queer people a reflection of themselves.

"I say that I'm undocumented because there might be a person in the audience who might not be public about it, but to them to see a representation or a reflection that our stories are not always doom and gloom," he said.

"We are powerful. We are resilient," he added. "We are people that are creating our own networks [and] our own communities. We are our best advocates. We are the people we've been waiting for, so it's important for us to not feel alone or not feel like you are not connected to a bigger community or that people are not watching out for you."

The representatives were joined by 62 other House members in a January 29 letter to Pompeo.

A new wave of arrests and detainment of 40 suspected LGBT Chechens was reported earlier this month. Two individuals have been killed as a result of torture, according to Russian LGBT Network and independent Russian news media.

The government-sponsored violence against Chechnya's LGBT community was first reported by Novaya Gazeta in April 2017 when it broke the story about 100 suspected gay people were rounded up, detained, and tortured by authorities.

Chechnya is an autonomous, conservative Muslim-majority, and highly homophobic republic of Russia led by Ramzan Kadyrov, who's a former member of the Chechen independence movement and is backed by Putin.

Cicilline, who is gay, called the ongoing violence against LGBT Chechens a "humanitarian outrage."

The House members called for Pompeo to "use his voice and the policy tools at his disposal to condemn this violence and work to bring it to an end," Cicilline said. "The silence of senior officials within the Trump administration speaks volumes."

The representatives urged U.S. officials to stand up to America's ideals not to remain silent and to stand as a "beacon of hope and freedom for the world."

"We cannot be silent while people are being oppressed, persecuted, imprisoned, tortured, and killed simply for being who they are," Swalwell said in the January 29 joint news release. "The United States must lead the world in demanding human rights for all, and so must bring all available diplomatic pressure to bear to put an end to this appalling violence once and for all."

Night of Ideas in SF to include queer panels
San Francisco transgender activist Aria Sa'id is among those who will participate in the global Night of Ideas event this weekend.

San Francisco's main library will host more than 30 topics exploring the City of the Future — including two queer panels — "Queer City" and "Heritage City" — on multiple floors over the course of the seven-hour marathon starting at 7 p.m. February 2 and ending at 2 a.m. February 3.

The international event, "Nuit des Idées," that facilitates "philosophical debate, talks, performances, and music" was launched in San Francisco's sister city Paris in 2015. This is the first time the city is participating.

Thousands of people are anticipated to participate in this year's global conversation focused on "Facing Our Time: The City of the Future."

The event is hosted on five continents in more than 100 cities around the world.

"I am very pleased to see the first edition of La Nuit des Idées in San Francisco," Emmanuel Lebrun-Damiens, a gay man who is consul general of the French Consulate in San Francisco, said in a January 8 joint news release. "As time accelerates and innovation constantly disrupts our lives, there is no better place than San Francisco to discuss this 2019 theme: 'The City of the Future.'"

Mayor London Breed has invited San Franciscans to participate in the conversation.

"San Francisco is a creative city that draws inspiration from the people in our neighborhoods as well as cultures all over the world," said Breed, who will be participating on a panel. "I'm excited by the line-up of innovative, international thinkers coming together at the main library and I invite all of San Francisco and the Bay Area to participate in the Night of Ideas and to share your thoughts and dreams about the future of our great city."

Sa'id, a 29-year-old straight black transgender woman, is excited to discuss her work and vision of a world where transgender people of color are empowered, she told the Bay Area Reporter.

"Many transgender people I know aren't from San Francisco. We all came here with one-way tickets and with dreams of something better than the realities we were living with and the places that we were from," said Sa'id, an LGBT policy adviser at the San Francisco Human Rights Commission.

She believes that the migration experience of transgender women of color and the journey to search for a place to be socially accepted and find economic opportunities can be translated, whether it's someone coming from the southern U.S. or refugees immigrating to European or more accepting countries.

"I think there are significant challenges to either population, both in San Francisco as well as Paris as a social justice issue," said Sa'id, a founder of two organizations, the Kween Culture Initiative and the Compton's Transgender Cultural District.

The event is free and open to the public. Reservations are required and can be made at https://goo.gl/rK6e37.

Global LGBTQ encyclopedia released
A new encyclopedia documenting the history of the LGBT experience around the world was published January 22.

"The Global Encyclopedia of Lesbian, Gay, Bisexual, Transgender, Queer (LGBTQ) History" aims to "provide students and researchers with the most current and reliable global content on LGBTQ history," according to the Gale, a Cengage company, in a news release.

"Gale created the 'Global Encyclopedia of LGBTQ History' to address the lack of academic, international LGBTQ content available for libraries and researchers," Paul Gazzolo, senior vice president and general manager at Gale, said in the release. "While other reference titles exist on LGBTQ topics, this new encyclopedia is the first authoritative academic resource that truly provides a global perspective on LGBTQ history."

The encyclopedia is written by academics who not only have subject matter expertise but also regional expertise in the field of LGBTQ theory. The encyclopedia provides students and researchers the first authoritative academic resource of its kind, with 383 entries dedicated to an international focus on the history of the LGBTQ community.

The volumes cover prominent figures and events globally in areas such as activism, art, literature, film, health and sociology across nearly 70 countries, according to the release.

To read a sample chapter, "The Art of Queering Asian Mythology," visit https://goo.gl/zggNnY.