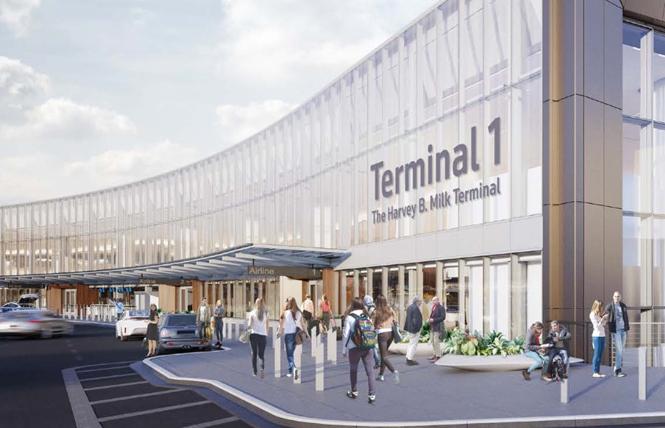 Supervisor Hillary Ronen has proposed an ordinance to flip the lettering size of the Harvey B. Milk Terminal. Photo: Courtesy SFO

District 9 Supervisor Hillary Ronen will introduce an ordinance next week aimed at forcing San Francisco International Airport officials to change the planned signage on the facade of the Harvey Milk Terminal.

It calls for the exterior signage facing the airport's roadway entrance and the domestic parking garage to state "Harvey Milk Terminal" in capital lettering at least four feet high. Below it would be smaller lettering for "Terminal 1" at about half the height.

It flips what airport officials had proposed in the fall. Their intent is to name the passenger facility "Terminal 1: The Harvey B. Milk Terminal." Based on renderings of the signage, those arriving to the terminal would see a prominent sign for Terminal 1 with Milk's name below it in a smaller font size.

But as the Bay Area Reporter first reported (https://www.ebar.com/news/news//266907) in October, Ronen and others contend that the airport's preferred sign downplays the honor the city is bestowing on the late gay supervisor by naming Terminal 1 after him. It is the first time a wing of an airport has been named after an LGBT person.

Gay District 8 Supervisor Rafael Mandelman shares Ronen's concerns about the signage and is a co-sponsor of her ordinance. He told the B.A.R. he expects it will have unanimous support at the board; the rules committee, which Ronen chairs, will first take up the matter sometime in March.

"It is sort of crazy we have to do this as an ordinance," he said. "The intention was to honor Harvey Milk and have passengers coming from around the world to see that."

SFO spokesman Doug Yakel had told the B.A.R in the fall that the sign was designed to adhere to accepted wayfinding methodology so that the airport's 57 million annual passengers can easily navigate through it. At the time, he said SFO director Ivar C. Satero had no plans to change the exterior sign.

In a November 30 report about the airport's Milk terminal plans sent to Mayor London Breed and the supervisors, Satero made no mention of altering the design of the exterior signage.

"SFO is committed to opening a state-of-the-art terminal of which the city can be proud, recognizing the contribution of Harvey Milk to the values of San Francisco," he wrote.

Ronen contacted Satero Tuesday to alert him to her ordinance.

"He doesn't want to do it. He is not happy," she said. "I don't care. What I care about is I believe members of the public are sophisticated enough to associate Harvey Milk Terminal with Terminal 1. As long as that lettering is there, they will be able to see it. I am just not buying the excuses."

Yakel told the B.A.R. this week that SFO officials have yet to see the ordinance but "are obviously aware something is coming." He added that, "Whatever guidance we are given on this, we are happy to follow it."

With leaders in the city's Chinese community pressing to name the airport's International Terminal after the late mayor Ed Lee, what happens with the Milk terminal signage will likely set a precedent for how the airport approaches the signage for the other terminals should they be named in people's honor. There are three terminals for domestic flights in addition to the one for international routes.

"For those championing names for the airport's other terminals, we are trailblazers here," said Ronen. "We are setting the precedent."

The naming of the Milk terminal, noted Ronen, "has been a struggle from day one."

Long trip to fruition
It dates back to 2013, when gay former District 9 supervisor David Campos, whom Ronen worked for as his chief of staff, proposed naming the entire airport after Milk, who in November 1977 became the first out elected leader in San Francisco and California. Due to lukewarm support for the idea, Campos worked out a deal with Lee to instead name one of the airport's four terminals in honor of Milk, who was killed by an assassin's bullet after less than a year in office.

After years of delays, an advisory panel in 2017 selected the under renovation Terminal 1 as the best choice, leading to city leaders approving the selection in early 2018. SFO officials in the fall detailed their plans for how they will incorporate both Milk's name and legacy into the renovated terminal's design and signage.

At the time Campos had also voiced displeasure with the proposed terminal sign. And the B.A.R. editorialized against it earlier this month, saying the design supported by SFO officials would result in "a perfunctory sign that is easily overlooked by people as they hurry to their flights."

Stuart Milk, who is gay and heads a foundation named after his uncle, told the B.A.R. that he too felt the airport's signage was unacceptable. He also questioned the airport's rationale, since the Tom Bradley Terminal at Los Angeles' airport doesn't have a number attached to it.

"We were all shocked when we saw their mock-up really diminished Uncle Harvey," said Milk, adding, "Supervisor Ronen's attempt to be conciliatory and have Harvey as the main name of Terminal 1 is the appropriate way to go."

Asked about the font fight in December, Breed had told the B.A.R. she needed to be briefed on the matter. She did express the need for both "appropriate acknowledgement" and information about Milk at the terminal, "and not just his name only but information to that effect, both when you come to the airport and as well as when you go on the website for the airport."

In addition to the terminal signage there will be an interior photographic display honoring Milk's legacy and the fight for LGBT rights. It will be in an area the airport is calling the Harvey Milk Inglenook and utilize photos the airport asked the public to submit by last month.