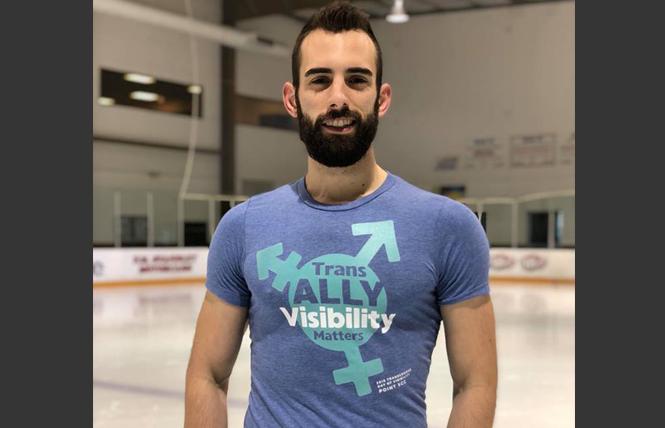 "I'm very grateful," LeDuc, 28, told Team USA. "I stand on the shoulders of many great athletes who have come before me and allowed me to be open. I believe I am the first openly queer person to win the U.S. pairs title. Rudy Galindo and Randy Gardner came before but I don't believe they were out."

Galindo won national and world juniors champions in pairs with Kristi Yamaguchi early in his career, and won the seniors pairs twice with Yamaguchi in 1989 and 1990. He came out in 1996.

Gardner and Tai Babilonia won five seniors pairs titles in a row, ending in 1980 — more than a quarter of a century before he came out in 2006. Gardner's life story is the subject of a documentary, "Go Figure: The Randy Gardner Story," currently in post-production.

The championship hopes for LeDuc and Cain took a hit six weeks earlier when Cain suffered a concussion while they were competing in Croatia. But she healed quickly, they were eventually able to restore elements of their program, overcame a second-place performance in the opening of the nationals, then separated themselves from the pack in the long program Saturday, January 26.

"Queer people still face a lot of challenges in this country," LeDuc said. "We're still fighting for equality. I know for me personally, I spent a lot of my earlier life self-deprecating because I didn't understand who I was, and it's taken years and years of work to overcome that. I still doubt myself sometimes. To be standing here today as the first openly queer athlete — I don't say that to honor myself, I say it to show to others that you can do this, you can overcome, and you are worth it. You don't have to doubt yourself for any reason."

Giants, A's LGBT events
The San Francisco Giants and the Oakland A's have both scheduled their LGBT special-event games for Pride Month this year.

The A's will hold their Pride Night on Saturday, June 1, with a 7:07 p.m. game against the Houston Astros. Special event activities and giveaways have not yet been announced.

The Giants will host their LGBT Night on Wednesday, June 12, with a 6:45 p.m. game against the San Diego Padres. Special event tickets include a pre-game party and a Giants rainbow flag.

Softball registration open
Team registration for the spring season of the San Francisco Gay Softball League is open through February 19. The season begins in March, with games played mostly on Sundays, and occasionally, Saturdays.

Individual players interested in joining the league may register as free agents, and the league will help them locate teams taking on players. An evaluation clinic for players new to the league, including those transferring in from other leagues, will be held Sunday, February 17, at Balboa Park.

For more information on the league, visit http://www.sfgsl.org.

Gender equality in the news
If you are one of those folks who still watch American football, you may notice that the Los Angeles Rams will have two male cheerleaders on the sidelines when they take on the New England Patriots Sunday in the Super Bowl. This will be the first time men have been included in any official Super Bowl cheerleading squad. (The beer-bellied guys with their shirts off, paint on their faces, and brews in their fists in the stands don't count.)

On the other non-beer-holding hand, United Arab Emirates recognized winners of its Gender Balance Index 2018 awards last Sunday. No, it doesn't have anything to do with sports, but we note the winners were all men.

"We are proud of the success of Emirati women and their role is central to shaping the future of the country," Dubai government media officials tweeted. "Gender balance has become a pillar in our governmental institutions."