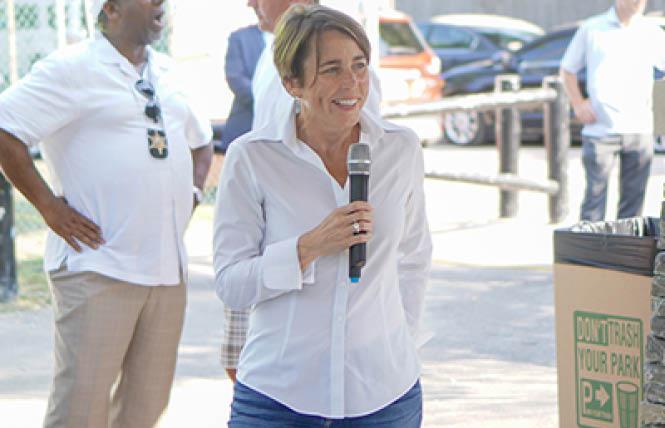 After an investigation by the Massachusetts Attorney General's office, Mutual of Omaha reached a settlement and has agreed to no longer deny coverage to people using HIV prevention medication such as PrEP, and will offer affected consumers an opportunity to apply for insurance.

"Consumers looking to protect themselves from HIV transmission should not be excluded from buying insurance," Maura Healey, a lesbian who is Massachusetts' attorney general, said in a news release. "Under this settlement, Mutual of Omaha will provide relief to affected consumers who faced this discrimination."

According to a news release issued by the AG's office, the insurance company had routinely denied life and long-term care insurance policies to Massachusetts consumers taking the medication Truvada for HIV prevention.

In a separate lawsuit filed by GLBTQ Legal Advocates and Defenders on behalf of a plaintiff who does not want to be identified, the insurance company settled out of court. Mutual of Omaha will issue a long-term care insurance policy to the plaintiff, reported GLAD.

"We are pleased that Mutual no longer declines insurance coverage based on the use of HIV pre-exposure prophylaxis, and we call upon other providers of life, disability, and long-term care insurance to do the same," Bennett Klein, AIDS law project director for GLAD, said in a news release.

The Bay Area Reporter spoke to Aaron Baldwin, a management consultant in San Francisco, who was an expert witness in the GLAD case. Baldwin, an HIV-positive gay man, was an insurance agent for New York Life where he started the first HIV financial planning practice for the company.

Baldwin explained that, when PrEP was first approved by the Food and Drug Administration as an HIV-prevention method in 2012 for adults, many insurance companies were late in understanding that it was beginning to be used as a multi-use drug, not just for people with AIDS. He said Mutual of Omaha, and many other large insurance companies, particularly those in Midwestern and Southern states, denied coverage for anyone using PrEP, and that some still do.

"Anyone taking PrEP was considered high risk, regardless of whether they were taking it for HIV prevention," Baldwin, who lives in the Castro district, said. "There is absolutely no reason for declining people for coverage on that basis."

He hopes the lawsuit will help insurance companies understand the multiple ways in which Truvada is used and help mitigate stigma related to taking the medication.

Under the terms of the AG's settlement with Mutual of Omaha, the company will offer consumers who were previously denied insurance because of their Truvada for PrEP use the opportunity to reapply for insurance under the company's revised underwriting guidelines. Consumers who do qualify for insurance under Mutual of Omaha's current guidelines will be offered the premium rates that were in effect at the time that their original application was declined. The company will also make a payment of $25,000 to the state.

Study: CA queer youth remain victims of bullying
A recent study released by the Human Rights Campaign Foundation in partnership with nine California civil rights and education organizations reveals the disproportionate challenges and symptoms of those challenges for LGBT youth in the state, particularly for queer youth of color.

The "California LGBTQ Youth Report" is based on 1,700 young people ages 13-17 who participated in HRC's online 2017 LGBTQ Teen Survey. The state survey was part of a broader HRC study in which 12,000 young people took part from all 50 states and the District of Columbia.

"This groundbreaking data reveal that the cards remain stacked against LGBTQ youth in California — and especially so for LGBTQ youth of color and transgender and gender-expansive youth," said Ellen Kahn, HRC Foundation director of the Children, Youth & Families Program in a news release. "However, despite these challenges, many LGBTQ students are taking action and advocating for inclusivity and equality in schools. As advocates, parents, teachers, school administrators and school board members, we must follow their lead by implementing recommendations in this report, including ensuring curricula are LGBTQ-inclusive and supporting LGBTQ student clubs, to create safe, affirming and welcoming schools."

HRC and researchers at the University of Connecticut found that only 32 percent of LGBT youth in the Golden State feel safe in their classroom and just 10 percent said their school's staff are supportive of LGBT students. Additionally, being bullied at school because of their LGBT identity, actual or perceived, was something half of the respondents said they have experienced while 28 percent of the LGBT youth surveyed have been threatened with physical violence at least once because of their sexual orientation or gender identity.

In California, laws recently have been passed to help protect LGBT youth. Assembly Bill 2246, passed in 2016, requires schools serving grades 7-12 to adopt a policy on student suicide prevention that specifically addresses the needs of high-risk groups, including LGBTQs.

As the B.A.R. previously reported, the West Hollywood-based Trevor Project released its report, "Protecting LGBTQ Youth Through Inclusive School Suicide Prevention Policies in California," November 19. The nonprofit, which works to end LGBTQ youth suicide, conducted a study of 406 schools serving grades 7-12 in the Golden State that have suicide prevention policies in place.

The HRC youth report also noted the additional challenges that LGBT youth of color face. Of the participants, only 11 percent of LGBT youth believed their race or ethnic group is regarded positively in the U.S. and four out of five LGBT youth of color have personally experienced racism.

Transgender students also face additional barriers, the report found. In California, 43 percent of trans youth can never use the restrooms or locker rooms that match their gender identity, either out of fear, school policy, or because they don't feel comfortable expressing their gender identity at school.

Additional findings reveal that 11 percent of LGBT youth reported having been sexually attacked or raped because of their actual or assumed LGBT identity while 77 percent of participants reported receiving unwanted sexual comments, jokes and gestures in the past year.

Of the 12,005 participants in the national survey, 1,913 were transgender boys, 216 were trans girls, 1,461 identified as nonbinary, 1,109 as genderqueer or gender-nonconforming, 2,692 were cis boys, and 5,786 cis girls. Those who identified outside of these categories was 545. Of the participants, 37 percent identified as lesbian, 34 percent as bisexual, 14 percent as pansexual. Pansexual participants accounted for 14 percent, asexual 4 percent, 2 percent were straight, and 1 percent or less identified as fluid, demisexual, or having multiple sexual identities.

The directive, "Reaffirming Commitment to Diversity in Government," prohibits discrimination on the basis of age, sex, race, color, national origin, marital status, and religion, but does not list sexual orientation or gender identity.

Equality Florida, the state's LGBT-rights group, has called for a meeting with the Republican governor, who beat Andrew Gillum (D) in the gubernatorial race last November.

"Equality Florida is deeply disappointed to see that LGBTQ employees and contractors have been left out of the governor's executive order," Joe Saunders, senior political director for Equality Florida, said in a news release. "It's hard to believe that Governor DeSantis and his staff are not aware of the LGBTQ community's call for these protections following the Pulse tragedy and therefore, it is hard to interpret this as anything less than a purposeful omission. As governors across the country establish these critical protections for LGBTQ families, this order draws a stark contrast. We look forward to a dialogue with Governor DeSantis about why LGBTQ employees have been omitted from this critical policy and how he plans to make sure that all Floridians, regardless of who they are or who they love, can be protected from discrimination."

DeSantis' office did not respond to a request for comment from the B.A.R.

The June 2016 mass shooting at Pulse nightclub in Orlando was one of the country's worst mass shootings in modern history. Forty-nine people were killed and 53 were wounded. Equality Florida and other LGBT activists demanded then-governor Rick Scott put in place discrimination protection laws for the LGBT community, something the nonprofit said he was "roundly criticized for failing to keep his promise."

DeSantis' order comes at a time when other Republican governors are stepping up to help protect LGBTs. Recently, governors from Wisconsin, Ohio, and Michigan have issued sexual orientation and gender identity-inclusive executive orders on non-discrimination in state government.

According to HRC, 21 states and Washington, D.C. prohibit discrimination based on sexual orientation and gender identity in employment and housing.

LGBTQ Update is a weekly online column addressing issues affecting the community. It runs weekly, but will be off for the Martin Luther King Jr. holiday, returning January 29. Please submit comments or column ideas to Alex Madison at (415) 875-9986 or a.madison@ebar.com.