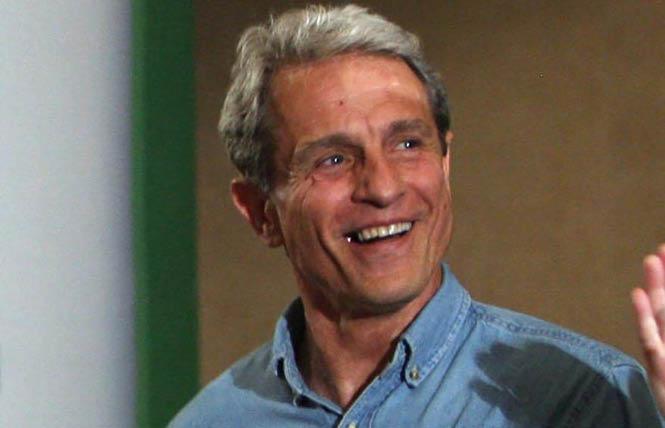 A coalition of 41 LGBT and allied organizations called for a thorough and independent investigation.

The LA center urged the sheriff "to keep the public fully informed as LGBT people have a considerable and urgent interest in a case that is so clearly linked to the health and safety of our community. The reports we have heard provide more questions than answers. The fact is two black men have died at Mr. Buck's home in less than two years."

On Thursday, authorities identified the man who died Monday as 55-year-old Timothy Dean, who worked at Saks Fifth Avenue and lived in West Hollywood. The Advocate reported that Dean was also an adult film actor.

In July 2017, the body of 26-year-old Gemmel Moore was found at Buck's home. Authorities later determined that Moore died of an accidental drug overdose. Buck did not face any charges.

"We, the undersigned organizations working to advance and empower the lesbian, gay, bisexual, transgender, and queer community, act in solidarity with the victims of those impacted by both tragic deaths of black men at Ed Buck's home in less than two years," the statement read.

"We will work in earnest to understand what happened to these men who lost their lives — Mr. Timothy Dean, who died Monday, and Mr. Gemmel Moore, who died under seemingly similar circumstances in July 2017 — and why Buck continues to maintain unsafe spaces for black gay men."

The Los Angeles Times reported this week that the sheriff's department said Monday that Buck was present at the time of Dean's death — as he was when Moore died — and that there would be a secondary review of the Moore case.

Buck's attorney, Seymour Amster, told the paper that Buck was not arrested and is cooperating with investigators.

The Times also reported that authorities found 24 syringes, five glass pipes, plastic bags with white powdery residue, and a crystal-like substance at the scene when Moore's body was found.

The LGBT and allied groups' statement said, "nearly a dozen young men have confirmed Moore's account and shared personal stories about Buck's alleged, nefarious practice of injecting black men with various lethal substances. In light of Monday's tragedy and the apparent pattern of abuse and death of black gay men in Buck's home, we insist that the Los Angeles County Sheriff's Department and the Los Angeles County District Attorney's office conduct a thorough and impartial investigation into both deaths."

Other organizations that signed the letter include the San Francisco-based National Center for Lesbian Rights and Equality California, the state's leading LGBT advocacy group. The two leading national groups, Human Rights Campaign and the National LGBTQ Task Force, also signed the letter, as did the New York LGBT Community Center.

The California Legislative LGBT Caucus said it was "deeply disturbed" by the situation.

"We are deeply disturbed about the death of yet another black man in the home of Ed Buck, apparently of a drug overdose," the caucus' statement read. "What happened in Mr. Buck's home isn't normal, nor should we ever accept it as normal. Rather, what happened is beyond troubling. It isn't credible that these deaths are random or a coincidence."

In recent days, several Democratic elected officials have donated contributions from Buck. Congressman Ted Lieu (D-Los Angeles) said he would split the $18,000 his campaign received from Buck to Lambda Legal Defense and Education Fund, GLAAD, the Trevor Project, and the Equality California Institute, which is the education arm of EQCA.

The LGBTQ and allied groups' statement urged other elected officials who have received donations from Buck to donate the money to charitable organizations that work to protect and empower black LGBTQ people and their communities.

The Courage Campaign issued a statement Thursday calling on politicians who have received donations from Buck to donate them to organizations serving LGBT youth of color.