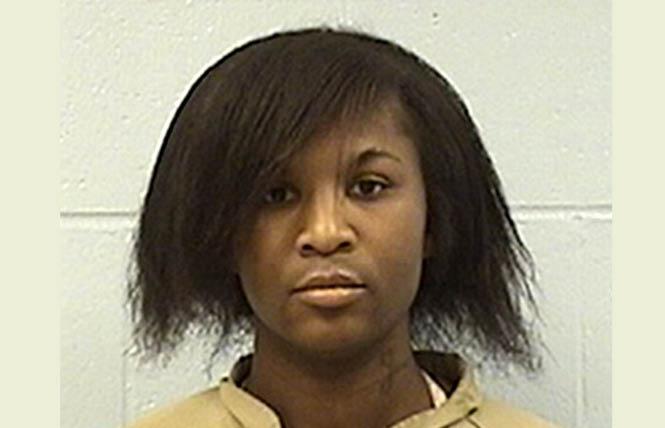 Strawberry Hampton, a trans woman, was recently moved to a female prison in Illinois after experiencing abuse in male facilities. Photo: Courtesy IDOC

After enduring years of abuse in various men's prisons throughout Illinois, Strawberry Hampton, a transgender woman, was transferred to a women's prison after a yearlong legal battle and strong resistance from state correctional authorities.

According to her lawyer, Vanessa del Valle of the MacArthur Justice Center, this was the second time that a trans woman was given the right to be housed in a facility matching her gender identity in the state.

Hampton, 27, is serving a 10-year sentence for burglary. She first took legal action against the Illinois Department of Corrections for the sexual and physical abuse against her by prison guards and officers in 2017. Because she feared for her life, Hampton accepted a settlement agreement, which included being transferred to another men's prison, early last year.

"The abuse and discrimination didn't stop there," del Valle said. Hampton filed yet another transfer request to a female facility. Because IDOC claimed Hampton needed proper mental health treatment and not to be housed at an all-female prison, Hampton was sent to another men's prison, Dixon Correctional Center, which IDOC claimed had more resources to treat Hampton's gender dysphoria. At Dixon she continued to experience the same kind of treatment.

In December 2017, the MacArthur Justice Center and the Uptown People's Law Center filed the first in a series of federal lawsuits seeking an order to protect Hampton from repeated sexual assaults and harassment by correctional officers.

One of the abuse allegations Hampton claimed in the suit that happened to her at Dixon was when correctional officers forced her and another inmate to perform sexual acts for the "officers' entertainment." Other allegations include extensive periods of solitary confinement; being called derogatory terms by staff including "faggot," "it," and "he-she;" being groped by fellow prisoners, who threatened to rape and kill her; and denial of phone privileges and attendance at her transgender support group.

In November 2018, U.S. District Court Judge Nancy Rosenstengel ordered IDOC to re-evaluate its denial of Hampton's request for transfer to a women's prison and ordered the department to develop training on transgender issues for all staff.

IDOC quietly moved Hampton from Dixon to the women's Logan Correctional Center more than 100 miles away in central Illinois in early December 2018.

Today, Hampton is doing "great" and "thrilled to be in a women's prison and to be recognized as a woman by the court," del Valle said, adding that this case is just the beginning for the fight for equal rights and protections for incarcerated transgender people.

"The fight for Strawberry and for all trans women in IDOC has only just begun," del Valle said.

IDOC did not respond to a request for comment from the B.A.R.

New LGBT station hits airwaves in Coachella Valley
A gay former media producer in Palm Springs decided to create his own LGBT-focused media corporation because he was fed up with the lack of accurate, LGBT-specific broadcasting programming available to the community.

"Our community is not represented well in broadcast media so we wanted to build a coalition to address that," Elijah Hartman, founder and president of Qchella Media Corporation, told the B.A.R. "We are attempting to develop media that supports the LGBTQ+ community, removes public prejudice, and educates the public about the community."

Hartman, 33, debuted K-GAY 106.5 FM, the first station of the corporation, the day after Christmas. It's locally broadcast throughout Palm Springs and the greater Coachella Valley area and is also streamed worldwide on TuneIn Radio. Although the station plays only music right now, the team of radio and media professionals involved in the corporation have a lot planned for the future. Podcasts, the possibility of a morning talk show program, and other entertainment and information programs and an on-demand podcasting platform will debut later this year.

"A great diversity of media is not created by and for the LGBTQ+ community," Hartman said. "It's important to hear content that is not created by producers in L.A. who are deciding what LGBTQ+ should be hearing."

While the mainstream media does highlight the increase in homophobia, discrimination, and hate crimes against LGBT people, these networks also engage in a "large-scale pattern and practice of stereotyping, misrepresenting, and underrepresenting LGBTQ+ lives in order to gain ratings," Hartman explained.

With a background as a media producer and an intellectual property lawyer, he decided to create what he said is the first-ever LGBTQ+ created, directed, and managed media corporation. In the months leading up to the media company's debut in the fall of 2017, Hartman collaborated with LGBT community leaders and businesses including gay-owned Sunnylands Broadcasting to bring together a coalition of LGBT experts who wanted to help bring Qchella Media to life.

Also on board as vice president and general manager of K-GAY is Brad Fuhr. Founder of Palm Springs' Gay Desert Guide and Oasis Marketing Group, which aims to connect local businesses to the LGBT community, Fuhr, a gay man, has decades of radio experience. Lesbian Jackie Thomas, former global brand director for Nike Basketball, is vice president of branding. Thomas is also board vice president for the Equality California Institute.

A unique aspect of the corporation is that it is a nonprofit. All proceeds raised through advertisement and member support will be devoted to content development, "allowing their team to meet the needs of their diverse communities in the Coachella Valley," stated a news release. The nonprofit also acquired sister station Smooth Favorites CV 104.3 KHCV-FM.

Much of the station's programming has not yet been created because Hartman wants to get input from the community as to what it wants and needs. He hopes the station will unite the community and also serve as a beacon of light for LGBT youth, who may live in rural communities less accepting of the LGBT community.

"The great thing about radio is it can reach millions," Hartman said. "There are many young people who are struggling in rural communities to find their voice. We want this to serve as a beacon of light for them."