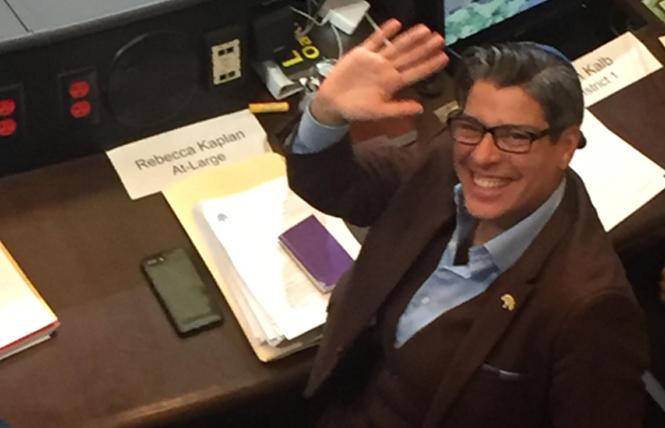 "I am honored to serve the people of Oakland as council president," Kaplan said in a statement. "I thank my colleagues for their confidence in my leadership and for the opportunity to serve Oakland."

Oakland Mayor Libby Schaaf was also sworn in Monday to a second term.

Kaplan did not return a call Tuesday seeking comment on her new position.

In her statement, Kaplan noted there are many challenges facing the city.

"We must acknowledge injustice and prejudice exist and we need leaders to assure we work together to move our city forward," she stated. "I believe in giving all council members the opportunity to effect change, and all council members will have an opportunity to chair a committee. I look forward to working together in coalition with the community to advance Oakland's vital needs."

Priorities for Kaplan include making council meetings more effective by changing how ceremonial items and scheduling are handled, so people coming to speak on important decisions are not made to wait around for hours before substantive discussion begins.

Kaplan also wants to strengthen the city's response to homelessness, including by ensuring implementation of a council resolution she authored that called for a list of specific actions to expand alternatives to help the homeless, and by working together with Alameda County leaders and others to expand access to services. She also wants to expand affordable housing, including through tax incentives, public land, and direct funding, and displacement prevention so that more people aren't pushed into homelessness.

Among her other priorities is continuing the move toward a proactive cleanup system with geographic assignments for litter and debris removal, instead of the old complaint-based system.

"So far, this change has been tried in one area successfully and in the coming year we will seek to expand and improve it citywide," she stated. "We have won increased funding for mattress recycling and will continue to advocate for mattress pick-up and additional strategies to prevent and remedy blight and illegal dumping.

"It is not OK to trash Oakland," she added.

Updated, 1/9/19: This article was updated to include Kaplan did not respond to a request for comment.