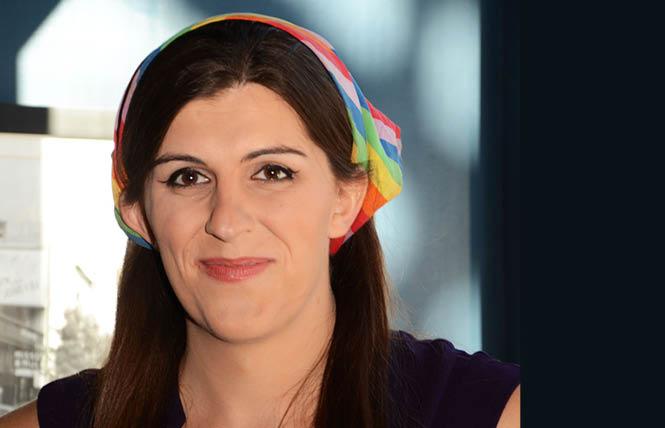 The LGBTQ Victory Fund announced its first round of endorsements for the 2019 election cycle last week and Virginia Delegate Danica Roem and Jolie Justus, a candidate for Kansas City mayor, made the top spots.

Roem, 34, is running for re-election in the 13th District of the Virginia House of Delegates for the November 2019 general election. She was the first openly transgender person to be elected and serve while openly transgender in any U.S. state legislature. When she first ran in 2017, she unseated a 26-year Republican incumbent, who frequently described himself as a "chief homophobe" of Virginia.

"The Victory Fund understands that, when given the opportunity, out LGBTQ elected officials can make great public servants who focus on serving their constituents instead of singling them out, no matter what they look like, where they come from, how they worship if they do or who they love," Roem told the Bay Area Reporter in an email. "That's why I'm proud to continue my partnership with the Victory Fund as we prepare to win in 2019 and continue to make Virginia a more inclusive commonwealth."

If Justus, 47, is elected, she will be the first openly LGBT mayor of a major city in the heartland, according to the Victory Fund.

"Now that I'm running for mayor of Kansas City, the Victory Fund endorsement continues to be important to me because it will help me once again with the technical and financial assistance that is critical for a major campaign," Justus told the B.A.R. "I'm excited about the prospect of becoming the first openly LGBTQ mayor of a major city in the heartland, because it is important that we have representation at all levels that reflects our entire community."

"While many believe 2019 is an off-election year, at LGBTQ Victory Fund we are gearing up to support dozens of history-making candidates who can greatly impact state and local governments," Annise Parker, president and CEO of the Victory Fund, said in a news release. "This year we can elect an unprecedented number of LGBTQ mayors and local officials, including the first big city mayor in the heartland, and secure the re-election of trailblazing candidate Danica Roem. For all the attention paid to the U.S. Congress, it is our state and local officials who have the most impact on the daily lives of their constituents."

Nine other candidates made the list including lesbian Lori Lightfoot, who is running for mayor of Chicago. A win for Lightfoot would make her the first openly LGBT mayor of one of the three largest American cities. (Parker herself is the former mayor of Houston, the fourth largest city in the U.S.)

"I'm extremely grateful and humbled that Victory Fund is endorsing my campaign for mayor of Chicago," said Lightfoot in a news release. "As someone who grew up in a small town and didn't know any openly LGBTQ+ people, much less role models or elected officials, I know that representation matters. I hope that as the first LGBTQ+ mayor of Chicago I can expand opportunities for equity and inclusion — and for increased representation in government for decades to come."

Another out LGBT running for mayor in a major U.S. city is lesbian Satya Rhodes-Conway, campaigning for the job in Madison, Wisconsin. She spent six years on the Madison City Council.

The other incumbents who made the Victory Fund cut so far include Bruce Kraus, hoping to secure a spot on the Pittsburgh City Council, and Robin Kniech, running for Denver City Council, at-large.

Campbell fought for LGBT equal rights all the way up to the Tennessee Supreme Court. She also organized Nashville's first pride parade in 1988. She died in 2014.

"In a career spanning decades, she worked courageously, tirelessly, and unceasingly for the rights and well-being of others, receiving an American Civil Liberties Union Bill of Rights Award among many other honors," read her obituary.

A large crowd gathered at the unveiling ceremony of the historical plaque that was placed outside Campbell's former East Nashville home, according to http://www.focusmidtenn.com. The mayor of Nashville, Megan Barry, spoke at the ceremony. She reminded the crowd that Nashville is a "warm and welcoming place because of people like Penny" and "this marker reminds us of the history she made."

Pippa Holloway, professor of history at Middle Tennessee State University, told Channel 5 News, "Penny was one of those people who were willing to say to Nashville that she was a lesbian and she was willing to be named and identified as such, and she was proud of it. That's what changed minds and brought us to where we are today."

The two bars, the Jungle and Juanita's, are regarded as Nashville's first gay bars. They opened nearly 60 years ago and at the time developed a reputation for being discreet places where gay men in Nashville could meet.

According to Nashville Public Radio, many raids occurred at the two bars, one resulting in the arrest of 27 men.

Nashville writer John Bridges led efforts for over a year to get the bars recognized for their historical contributions. "There are younger gay people out there that have no sense of this history," Bridges told Nashville Public Radio. "They really have no sense of what it was like to just go find a place in the middle of the night for you to go to, and it was the only place to go."

"I think it's important to have a marker that says, 'This went on there,'" Bridges said. "And it's important for the gay community to know that it went on, too."

The Metro Historical Commission did not respond to a request for comment from the Bay Area Reporter before this article was published.

While Nashville is taking a proactive step to recognize its LGBT history, the state of Tennessee remains on San Francisco and California's list of restricted states for taxpayer-funded travel for public employees due to anti-LGBT state laws.

Gay Canadian conservative party member's old anti-gay quotes catch up with him
A gay United Conservative Party member in Alberta, Canada, has quit over the highly publicized homophobic comments made by the organization's leader Jason Kenney two decades ago.

On World AIDS Day, December 1, Kenney tweeted a video in support of HIV/AIDS organizations and patient care facilities. The video received backlash, however, due to his past remarks on the matter.

Kenney was captured in a 2000 video bragging about how he helped overturn a spousal law in San Francisco that allowed gay men to visit their dying partners in the hospital during the AIDS epidemic, according to Vice.

"It's worth remembering that Jason Kenney has spent his entire political career fighting against LGBTQ rights. He's never apologized for his treatment of the community and, even today, he aligns himself with anti-LGBTQ activists like John Carpay," Kyle Morrow, an attorney and political activist, told Vice, referring to the president of the Justice Centre. "If Mr. Kenney has truly evolved, he should apologize to the individuals who were prevented from visiting their dying partners in the hospital."

Cody Johnston, a gay member of UCP, announced his departure from the group in early December. Not only was it Kenney's attack on the LGBT community that motivated Johnston to quit, but Kenney's failure to apologize for it. Kenney has since publicly said he regrets his comments.

"Not apologizing for your troglodyte words ... and just point-blank saying, 'I've regretted many things,' well, that's a copout. That's unacceptable, and I don't think Albertans are going to take it," Johnston told the Cold Lake Sun.

Johnston continued, "It's unacceptable for this to go on anymore. This conversation has been ignored by (Kenney) for too long. I can no longer sit on any UCP board with a leader like Jason Kenney."

The director of communications for UCP, Matt Solberg, told the B.A.R., "The comments occurred 20 years ago, with the event in question happening 30 years ago. Barack Obama and Hillary Clinton both opposed same-sex marriage until quite recently. We recognize that people's' views can and do change."

Update: 12/19/18: This article has been updated to include Danica Roem's correct age, 34 and that she is running in the 2019 general election.

LGBTQ Update is a weekly online column addressing issues affecting the community. It will be onb holiday break until January 8. Please submit comments or column ideas to Alex Madison at (415) 875-9986 or a.madison@ebar.com.