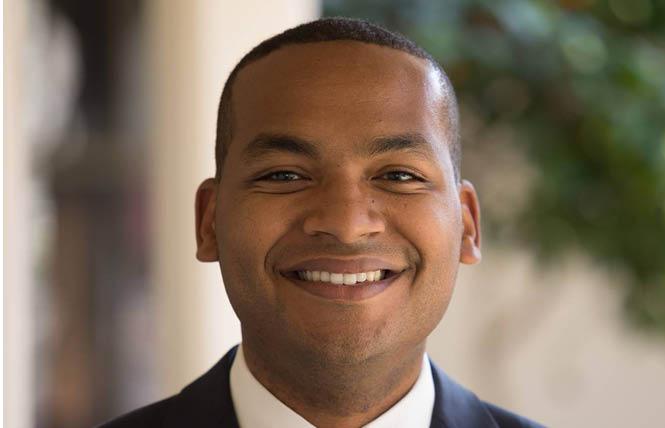 A number of cities around the Bay Area and on the Monterey Peninsula are welcoming newly elected LGBT officials into office.

In recent weeks three out winners of electoral contests this year took their oath of office, while another seven will do so next week.

The first to join the ranks of LGBT elected officials was San Mateo County Superintendent of Schools Nancy Magee. She took her oath of office the night of November 14.

Magee, who lives in Half Moon Bay, had been serving as the county education office's associate superintendent of student services. She won a close contest in June to succeed Campbell by defeating her former gay colleague, Gary Waddell, Ph.D., who recently left to work as an assistant superintendent at the Santa Clara County Office of Education overseeing public affairs, leadership, equity, and educational progress.

"I am truly honored to serve the students, families, and schools of San Mateo County," stated Magee. "I am deeply committed to carrying out SMCOE's mission of excellence and equity in education and am committed to supporting our 23 school districts in accomplishing our shared goal to ensure every student graduates with the skills needed for success in college, career, and life."

On the Monterey Peninsula, two cities have seen their first gay councilmen take their seats. Jeffrey Baron took his oath of office as a Carmel-by-the-Sea City Councilman November 27.

He and his husband, Kevin D'Angelo, bought a home there in 2005 and moved there in 2011 when they retired following successful careers in Silicon Valley. Since becoming a council member Baron has hit the ground running, holding "office" hours to meet with constituents at the Carmel Coffee and Cocoa Bar, the same place where he met with voters during the campaign.

In nearby Monterey, City Councilman Tyller Williamson took his oath of office last Tuesday, December 4. Not only the first out person to serve on the council, he is also the first black person and, at 31 years of age, the youngest.

"I feel fortunate to have the support of many community members, and am humbled for the opportunity in serving as their next Monterey City Councilmember," said Williamson, adding that his swearing in ceremony "was about recognizing all of their work, and giving encouragement for their continued involvement in local politics within the Monterey Bay Area. There's a lot of work to do, and we'll need the voice of the community to advance on issues such as water, housing, transportation and transparency. A big thank you to all the supporters!"

#ICYMI Congrats to Tyller Williamson, our newest member of the #Monterey City Council, who was sworn-in last night. @Tyller4Monterey is a staffer & MBA student at @NPS_Monterey. In a historic run, he is the youngest & first African American & openly gay councilmember in Monterey. pic.twitter.com/MduOx5tpfD— City of Monterey (@CityofMonterey) December 5, 2018

Monday, December 10, Santa Cruz resident Adam Spickler will make history as the first transgender man to hold elected office in California when he is sworn into the Area 2 seat on the Cabrillo College Board. He was appointed in lieu of election on August 15 when no one else entered the race for the community college board seat.

A 2002 graduate of Cabrillo College, Spickler will represent parts of Santa Cruz, Live Oak, and areas north stretching to the Summit on the college board.

"Cabrillo is a college I love, and I am excited to put my expertise in government policy and finances and my experience as a bridge builder to good use for Cabrillo," stated Spickler, a senior analyst for Santa Cruz County.

Also Monday, Laura Parmer-Lohan will be sworn into her seat on the San Carlos City Council. She took first place out of three winners for council seats in the San Mateo County city with 27.8 percent of the vote or 9,952 total votes.

Parmer-Lohan is part of a self-described "rainbow family" with her wife, Kathy Parmer-Lohan, executive director of the San Carlos Education Foundation, and their two teenage sons, Bradley and Gregory. She is believed to be the first out LGBT city council member in San Mateo County.

"Soon, we will begin our work together to create the community that we all desire. I look forward to serving you and our neighbors in this important role," wrote Parmer-Lohan, the owner of marketing and consulting firm Ruckus Partners, in an email inviting her supporters to attend her swearing-in ceremony.

Tuesday night, December 11, James Aguilar will be sworn into the Area 6 seat on the San Leandro Unified School District Governing Board. The 18-year-old, gay freshman at San Francisco State University was appointed in lieu of an election since no one else filed to run for the seat.

And in Santa Cruz, lesbian environmental activist Donna Meyers takes her oath of office as a newly elected city council member. Meyers, who has been with her wife, Birdie Hunter, for 30 years, has been serving as chair of the city's parks and recreation commission.

Wednesday, December 12, lesbian Emeryville resident Sarah Nguyen, 44, will become the first LGBT person on the Emery Unified School District board when she takes her seat. The married educator took the last name of her wife, Huong Nguyen, who is divorced from her previous wife she shares custody of their two teenage sons with.

Thursday night, December 13, queer indigenous Latinx-Asian teacher Jorge Pacheco Jr. will be sworn into his Area 3 seat on the board overseeing the Oak Grove School District. He will be the first out person and first Latino on his school board.

Also that day Janice Li will be sworn into her District 8 seat on the board that oversees the BART regional transit agency. She is the first queer Asian-American woman elected to the transit board, and one of only two LGBTQ elected women in San Francisco.

Li will be the third out member on the BART board. She represents San Francisco's western neighborhoods and oversees the Embarcadero, Montgomery, and Balboa Park BART stations. Her first BART board meeting will be December 20.

Later this month, gay United States Navy veteran Shawn Kumagai will become the first LGBT person to serve on the Dublin City Council when he is sworn in Tuesday, December 18.

Election postscript
With Contra Costa County elections officials posting a final vote count Monday, December 3, gay business leader John Stevens once again fell short in his bid for a seat on the Martinez City Council. In his second run for office in the East Bay city, Stevens had taken first place on Election Night for the council's District 4 seat with a 25-vote lead over his opponent, Debbie McKillop, who heads Contra Costa County's crime lab.

But once all the ballots were counted, the results flipped to give McKillop a 23-vote advantage over Stevens, believed to have been the first LGBT CEO of a chamber of commerce in Contra Costa County, having led the Martinez Chamber of Commerce. She won the race with 50.26 percent of the vote, while Stevens fell short at 49.74 percent.

UPDATED 12/12 to include the swearing-in of lesbian Santa Cruz City Councilwoman-elect Donna Meyers.