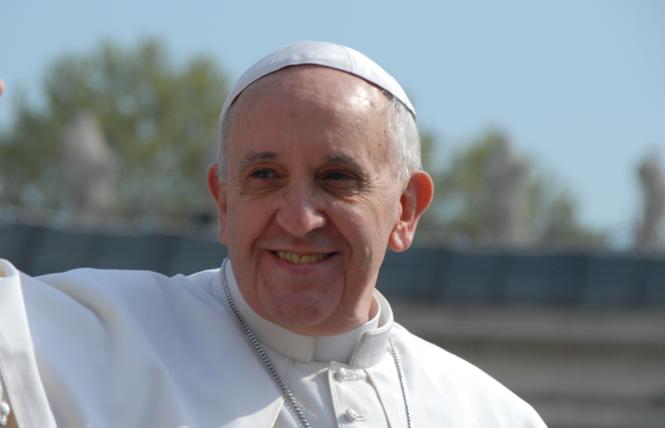 In a new book, Pope Francis says that gays are not welcome as clergy in the Roman Catholic Church. Photo: Bill Wilson

Pope Francis clarified his stance on gay priests and nuns serving as Catholic clergy with the release of his new book, "The Strength of a Vocation: Consecrated Life Today."

In short, gays don't belong serving in the Catholic Church.

The Vatican released the Italian version of the interview-style book December 1. On Monday, the translated versions were published.

The book recounts a four-hour conversation between Pope Francis and Spanish missionary Fernando Prado in August. Vatican News reported the interview explored a variety of challenges the church faces today.

In the book, the pope expressed concern about homosexuality in the church, saying it is a "very serious issue" and "must be adequately discerned from the beginning with the candidates."

"In our societies it even seems that homosexuality is fashionable and that mentality, in some way, also influences the life of the church," he said.

In 2013, months after Pope Francis assumed the papacy, he took a hands-off approach to gays saying, "If someone is gay and is searching for the Lord and has good will, then who am I to judge him?"

After urging gay priests and nuns to live celibate lives with "integrity," he stressed that they "be impeccably responsible, trying to never scandalize either their communities or the faithful holy people of God."

"It's better for them to leave the ministry or the consecrated life rather than to live a double life," he says.

The Roman Catholic Church's stance continues to be that homosexual acts are sinful.

The pope's position is in line with the church's policies. In 2005, the church barred people with homosexual tendencies and who support "gay culture" from holy orders. In 2016, the church stressed the obligation of sexual abstinence, reported The Guardian.

After months of harassment, on November 26, Nicaraguan authorities detained and deported Quiros, 62, a feminist, LGBTQ community leader, and public-health specialist.

Quiros, the director of the Center for Information and Health Advisory Services, is originally from Costa Rica but has lived in Nicaragua for 40 years. She became a naturalized citizen 21 years ago, reported the Tico Times.

Quiros, and other activists and journalists, was a beneficiary of a precautionary measure issued by the Inter-American Commission on Human Rights (Resolution no. 70/18). The resolution was adopted due to the harassment they experienced by Nicaraguan authorities going back to April, according to an IACHR news release.

This is the second time the Nicaraguan government has attempted to strip Quiros of her Nicaraguan citizenship, reported the Havana Times. The first time was in 2000 when she criticized the corruption in then-president Arnoldo Aleman's administration.

Three other feminist activists who are Nicaraguan naturalized citizens were also detained but not deported, IACHR said.

The next day, feminist activists were denied entry into police facilities to obtain permission to hold the 25th annual International Day for the Elimination of Violence Against Women march. Media reports said the November 25 march was canceled.

Today, Nicaragua reported that Quiros attempted to file an appeal with the court, but couldn't get past the main gate.

When that didn't work, she held a news conference in Managua with other activists and lawyers from the Nicaraguan Center for Human Rights, denouncing the summons.

She was eventually taken by authorities of the Judicial Assistance Directorate, also known as "El Chipote" prison, according to IACHR.

During her detention and deportation, she wasn't allowed to contact legal representatives or challenge the lawfulness of her detention and expulsion from the Central American country. Media reports said that she was humiliated by being handcuffed and photographed throughout the process and forced to remove her T-shirt at the border.

Representatives of IACHR, the United Nations High Commissioner for Human Rights, the Permanent Commission of Human Rights, Front Line Defenders, and other international organizations denounced Quiros' deportation and called for her citizenship to be reinstated.

"As a naturalized woman, she has the same rights as any other, but she was not informed that she was being investigated, her right to defense was not allowed, [and] she was mistreated and humiliated," Denis Darce, project director of the CPDH, told Dia Rio Metro.

Commissioner Luis Ernesto Vargas Silva, the IACHR rapporteur on the Rights of Migrants, said in a statement, "The expulsion of Ana Quiros is highly worrying, since it is a reprisal for her work as a human rights defender."

He pointed out that Nicaragua's actions are "not in accordance with the Inter-American and universal standards."

Quiros also denounced her own deportation and the persecution of other feminist activists who have demonstrated against President Daniel Ortega and his government.

"We cause discomfort for Daniel Ortega, but especially for [first lady and Vice President] Rosario Murillo," Quiros told reporters. "There is no movement bigger, stronger, and more supportive than the feminist movement."

During their detention they were forced to sign papers not to participate in political activities. They have to reapply for their residency status and report to authorities every 15 days during the application process, according to IACHR.

In a message on government TV, the Havana Times reported that Murillo said the Nicaraguan government was "banishing evil."

"We have come, step-by-step, banishing evil, perversity, the diabolical attempts that sowed terror in Nicaragua, which aimed to fill us with hatred," said Murillo.

The new U.S. Ambassador to Nicaragua, Kevin K. Sullivan, provided no assistance to Darce and other human rights representatives who met with him.

Salvini is a right-wing leader of the League party (formerly known as Northern League), an ultra-conservative political party known to be anti-LGBT.

The party vowed to reduce immigration into Italy, which has become the first destination for many people fleeing from hotspots in Africa and the Middle East in recent years.

Media reports indicate that hundreds of people have drowned trying to cross the Mediterranean in overcrowded boats and dinghies to get to Italy.

The legislation is anticipated to impact many people, including those who received humanitarian protection last year. Many who received asylum might lose their legal status when their documents expire.

Some exceptions were made for people who needed urgent medical care or were escaping natural disasters, but there was no mention of exceptions on the grounds of sexual orientation and gender identity.

"We are very worried," Guaiana told Gay Star News. "It will be harder and harder for LGBTI refugees in Italy."

Humanitarian permits are being downgraded to special permits that will be re-evaluated on an annual basis, based on the original reasons people were granted the humanitarian permit, Guaiana said.

If they are rejected, they will be deported to their home country.

Additionally, the Italian government is drafting a list of "safe countries," but Guaiana expressed concern about the government's criteria when it comes to defining safe for LGBTs.