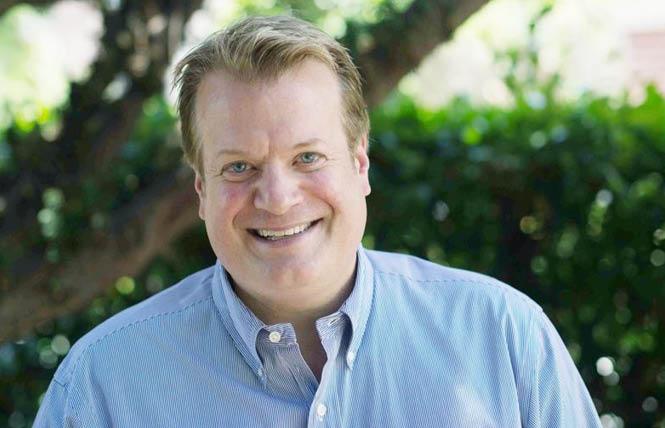 On Election Night it appeared that gay Alameda City Councilman Jim Oddie had failed to win a second, four-year term. In the race for two council seats, he landed in third place among the five candidates.

But due to a quirk in the East Bay city's election laws, Oddie will continue to serve on the council through 2022. City Councilwoman Marilyn Ezzy Ashcraft's defeat of Alameda Mayor Trish Spencer had a domino effect on the council race.

Because she will now resign her council seat, and Oddie came in third with 19 percent of the vote in the council race, he is automatically appointed to the vacancy on the council, as the East Bay Express noted in a story last week. Oddie's victory is all the more surprising considering that, for the last year, has been embroiled in a scandal over the hiring of the city's fire chief and a prominent East Bay newspaper columnist had urged Alameda voters not to re-elect him.

Oddie did not respond to a request for comment by the Bay Area Reporter's press deadline Tuesday. Earlier this fall he had told the B.A.R. that he didn't think the negative headlines stemming from the scandal would impact his council bid as most voters weren't asking him about it on the campaign trail.

"While votes continue to be counted, I am grateful that Alamedans have elected me to continue the work we began four years ago to address traffic, public safety, and affordable housing options for our workforce and future generations," wrote Oddie, the district director for state Assemblyman Rob Bonta (D-Oakland). "I congratulate the mayor-elect and councilmember-elects and look forward to working with the community to maintain the quality of life our residents expect and deserve."

Oddie first came out publicly to the B.A.R. in September, just days ahead of his sending out a campaign mailer with a photo of him and his husband, graphic designer Hideaki Ichizawa. The couple, together nearly six years, married May 7 in a small, private ceremony that they had largely kept secret until this fall.

Gay El Cerrito City Councilman Gabriel Quinto, currently serving as his city's mayor, easily secured re-election, as he and another candidate were the only people to run for the two council seats up this year. Four years ago he became the first LGBT person to serve on the El Cerrito City Council, and his election marked the first time a person living with HIV had won public office in the Bay Area.

In Richmond, gay community leader Cesar Zepeda continues to be in fourth place for three seats on the council. Two years ago he lost his bid to become the first out gay man elected to the Richmond City Council.

As of Monday, he was trailing the third place finisher by 94 votes. Should the results go unchanged as more votes are counted, then Richmond will no longer have an out council person come 2019. Lesbian City Councilwoman Jovanka Beckles will depart this year as she forewent seeking re-election to instead run for state Assembly, a race that she lost.

In other East Bay election news, LGBT advocates appear to have been unsuccessful in defeating Fremont City Council candidate Yang Shao, currently president of the city's school board. They had targeted Shao due to his opposition to LGBT inclusive sex-ed curriculum.

Justin Sha, a gay recent graduate of UC Hastings College of the Law, had even entered the race for the open District 4 council seat in hopes of luring Asian voters away from Shao. And on Election Night, the strategy looked to have worked, as Shao was in second place.