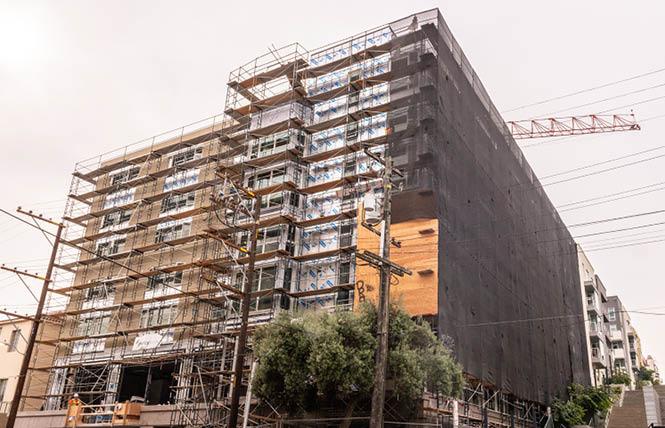 The window to apply for the second phase of an affordable housing project aimed at LGBT seniors in San Francisco is expected to open in early December.

Construction on the $40 million project, which will include 79 units of housing and 7,000 square feet of community space, is so far ahead of schedule. The residents selected by lottery for the housing are expected to move into their apartments April 1.

The seven-story building at 95 Laguna Street is a collaborative effort between affordable housing developer Mercy Housing and Openhouse, a nonprofit provider of LGBT services in San Francisco. The two agencies in late 2016 opened the project's first phase, which saw a former college building on the edge of the city's gay Castro district remodeled into 40 rental units, one of which is for the resident manager.

It is known as the Openhouse Community at 55 Laguna. While any senior, LGBTQ or straight, who met the eligibility requirements could apply to live there, a majority of the residents selected, 68 percent, identify as LGBTQ.

Openhouse officials are hoping to see a similar majority of LGBTQ residents move into the new building, being built on the site of a former surface parking lot. It will be called the Marcy Adelman and Jeanette Gurevitch Community at 95 Laguna after the agency's co-founders.

Already, Openhouse has compiled a list of more than 1,200 LGBTQ seniors who have expressed a desire to live there.

"My hope and commitment is that, with strong community support and working with my staff, we will have a majority of residents in the new building who are LGBTQ-identified," said Openhouse Executive Director Karyn Skultety, Ph.D., who is bisexual and took over the agency in February last year.

Openhouse focuses on senior housing needs year-round, noted Skultety, and has routinely reminded the 2,500 people it served during the 2017-2018 fiscal year about the opportunity to apply to live at 95 Laguna. It expects to see at least 3,000 seniors, both LGBT and straight, enter into the lottery for the new units.

The interest has been "overwhelming," said Skultety.

"I would love to tell you the need for affordable housing has gone down in the last two years but I would be lying," she said. 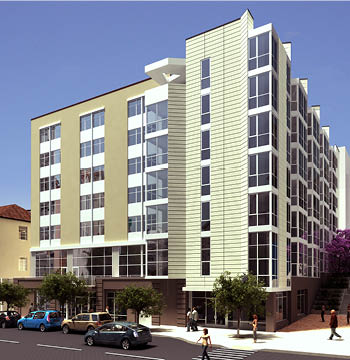 As of this week, the exact dates had yet to be finalized for the seven-day period when applications for 95 Laguna will be accepted. Skultety told the Bay Area Reporter it should be sometime in early December, with the lottery to randomly select residents being conducted in early 2019.

Kate Hartley, director of the Mayor's Office of Housing and Community Development, was traveling out of the country and could not be reached for comment.

Doug Shoemaker, president of Mercy Housing California, told the B.A.R. this week that they are expecting to have people move in come April.

"The project is on schedule. It is a little too early at this point to say it will be ahead of schedule, as too many things could happen between now and then," he said. "We are feeling good about where things are. We are feeling great we are going to make an April move in."

The Openhouse project continues to be the only one Mercy is building that is LGBT-friendly senior housing.

"In this environment we are really excited to open up all these new housing opportunities," said Shoemaker. "It has been fantastic; we would love to work on more."

Eligibility criteria
Of the 79 new units at 95 Laguna, one will be the living quarters of the property's resident manager, and 15 units will be designated for people who are homeless or at risk of homelessness. Another six units will be specifically for people living with HIV or AIDS.

The remaining 57 units will be selected by the lottery. Seniors living alone must be 62 years of age in order to be eligible to apply. For couples or households with more than one member, at least one person must be 62 at the time the applications are due.

Anyone who entered the lottery for 55 Laguna and did not get accepted must submit a new application for 95 Laguna. The age limit for the new building is higher than it was for 55 Laguna, which was set at 55 years old, due to changes in the rules governing the financing of the new building.

The other eligibility criteria are largely the same, such as applicants must meet certain income thresholds and either live or work in San Francisco. Applicants who were displaced by redevelopment in the city's Western Addition and Hunters Point neighborhoods in the 1960s and 1970s will be given first preference.

Those seniors who were displaced by an Ellis Act or owner move-in eviction will be given second preference. Residents of the District 8 supervisorial district or seniors living within a mile and a half of the building will be eligible for up to 40 percent of the units.

While any senior, regardless of their sexual orientation or gender identity, can apply to live at 95 Laguna, Skultety is working with the city's housing officials to make sure they know that Openhouse will be overseeing the services offered to the residents as well as programming the new community spaces on the first and second floors of the building.

The building will share an outdoor courtyard with 55 Laguna, which not only houses residents but also Openhouse's staff offices at 65 Laguna Street. It is known as the Bob Ross LGBT Senior Center due to a $1 million donation from the foundation of the B.A.R.'s founding publisher.

"I don't want someone applying to live here who is not OK with living in an LGBTQ-welcoming space," said Skultety, who has advocated for all the marketing material about 95 Laguna to note that fact. "It is important that is emphasized."

Of the straight seniors who live at 55 Laguna, many are allies who either grew up with LGBT family and friends or have children who are LGBTQ, said Skultety.

"The straight allies who live at 55 Laguna are such a vital part of our community," she noted. "They've participated in allyship the way I hoped they would."

For those with questions about the lottery for 95 Laguna or applying for other senior housing options, Openhouse is holding several workshops this month. The next ones will be at 3 p.m. Friday, November 23, and at 11 a.m. Tuesday, November 27.

They are both an hour long and will be held at 65 Laguna Street. An RSVP is required and can be made by contacting Theresa Mullen at (415) 685-0886 or theresa@openhouse-sf.org.

People with questions can also call the Openhouse Housing Hotline at (415) 230-0634. To sign up for email updates about the approaching application deadline, visit www.openhouse-sf.org/join95.