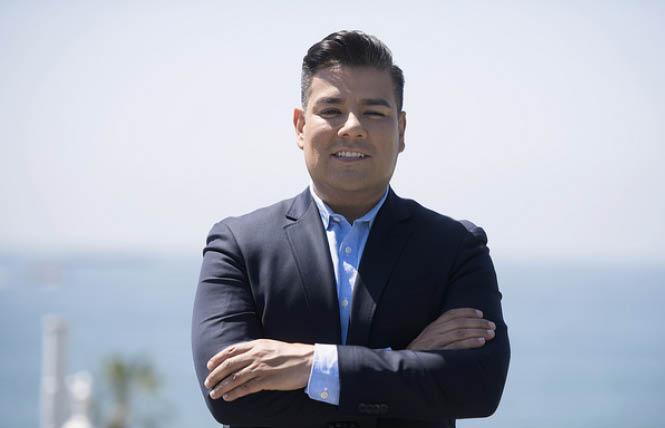 A year ago gay state Senator Ricardo Lara (D-Bell Gardens) looked like he would easily achieve a milestone no out LGBT candidate had been able to accomplish for two decades — win statewide elected office in California.

The candidate for state insurance commissioner was the lone Democrat in the race and was facing a little known Bay Area Republican insurance agent. But then, in January, fellow Democrat Dr. Asif Mahmood dropped his bid for lieutenant governor to run for the insurance czar post and spent the spring running negative ads against Lara.

Adding to Lara's difficulties was the news in early February that former insurance commissioner Steve Poizner was seeking to be re-elected to the position. Rather than run as a Republican, as he had prior, Poizner said he would do so this year as an independent.

The wealthy former tech entrepreneur was the first-place finisher in the June primary. And Poizner is the clear favorite headed into the November 6 election, according to numerous polls in recent weeks.

To turn the tide Lara has been running an old campaign ad of Poizner's when he sought to become governor in 2010 in which he says he will "stop taxpayer-funded benefits for illegal immigrants." Lara also makes a point to mention that he is the preferred candidate in the race of Lieutenant Governor Gavin Newsom, the expected winner of this year's gubernatorial race.

Listen up folks! This man right here is by far the BEST candidate for Insurance Commissioner. Make sure you cast your vote for Ricardo Lara on Tuesday! @RicardoLara4CA #EveryVoteCounts #November6th pic.twitter.com/2JLzoEiodq— Toni G. Atkins (@toniatkins) November 2, 2018

Equality California, the statewide LGBT advocacy group, has prominently featured Lara on its slate cards sent in recent weeks to LGBT households across the state. As of late October, it had sent more than 650,000 pieces of mail, reaching nearly 850,000 voters. It also launched robocalls for Lara and other candidates it is backing in a number of targeted districts around California.

"I think we all learned two years ago that sometimes the pundits and pollsters get it wrong," EQCA spokesman Samuel Garrett-Pate told the B.A.R. when asked about the polls predicting Lara will lose. "Ricardo is running a strong race and focusing on the issues that matter to Californians — making sure everyone has access to quality healthcare, helping our communities recover from wildfires and standing up to the Trump-Pence administration. We're looking forward to making history on November 6 when Ricardo becomes California's first openly LGBTQ elected official."

Lara barnstormed through the Bay Area the weekend prior to Halloween, addressing the annual California State NAACP Convention in San Mateo Friday, October 26, and helping to greet U.S. Senator Bernie Sanders (I-Vermont) at a rally in Berkeley Saturday, October 27. That afternoon he was in San Jose for a get-out-the-vote event with Congresswoman Anna Eshoo (D-San Jose).

This past week he was focused on reaching southern California voters with phone banking events in Los Angeles County.

"We are ready to make history on Election Day," Lara boasted on Facebook late Thursday, November 1, while at Los Angeles gay bar the Abbey where his supporters held a text bank to promote his candidacy.

Lara's candidacy is just one potential historic victory EQCA is hoping to celebrate Tuesday night. Rick Zbur, the organization's executive director, is spending the weekend promoting the bids of several out candidates.

Friday evening he was scheduled to be in Palm Springs ahead of its yearly Pride celebrations to promote lesbian aging expert Joy Silver's bid for the state's 28th Senate District seat. Should she win, Silver would be the first out LGBT state lawmaker from the Coachella Valley. Newsom was also set to attend the event the city's Mizell Senior Center.

Today I took out my Equality California @eqca Voter Guide and filled out my ballot! Off to the post office now to do my part to elect pro-equality candidates up and down the ballot. We have the power to bring sanity and American values back to our government. #vote4equality pic.twitter.com/Y72i8sGN5S— Rick Zbur (@rick_zbur) October 30, 2018

Saturday afternoon Zbur is headed to Stevenson Ranch in the Santa Clarita Valley for a get-out-the-vote rally and canvass kickoff for bisexual congressional candidate Katie Hill. She is looking to unseat Republican Congressman Steve Knight in the state's 25th Congressional District north of Los Angeles. Should Hill win, the Democrat would be the first out female member of California's congressional delegation and only its second, after gay Congressman Mark Takano, who is expected to easily win re-election in his Riverside County district.

In a fundraising pitch sent out on Halloween about the importance of funding EQCA's electoral efforts this year, Zbur noted he had spoken to the mother of a transgender daughter while making phone calls to voters.

"That family is scared — to say the least," wrote Zbur. "What the Trump-Pence administration wants to do to transgender Americans and their families is appalling: ignorant, heartless fear-mongering at its worst. LGBTQ people and our families deserve dignity, respect, safety and peace of mind."

SF campaigns host election night parties
In San Francisco, candidates and campaigns will host a number of parties Tuesday night as they await voting results. Here is a sampling of where local politicos will be gathering.

The San Francisco Democratic Party is hosting a celebration at the South of Market gay-owned SF Oasis nightclub, 298 11th Street. Doors open at 8:30 p.m. and the event will run through 2 a.m.

Gay school board candidate Phil Kim will gather with friends and supporters beginning at 8 p.m. at gay bar Moby Dick, 4049 18th Street, in the Castro.

Queer BART board candidate Janice Li is joining forces with school board candidate Gabriela Lopez to host an Election Night dance party from 8:30 to 11:55 p.m. at Pops Bar, 2800 24th Street, in the Mission.

The gay-owned Manny's, at 3092 16th Street at Mission, will be celebrating its opening night with an election returns watch party from 6 to 11 p.m. The eatery, bar and community events space is the brainchild of Emanuel Yekutiel, who worked on Hillary Clinton's 2016 presidential campaign and serves on the board of the Alice B. Toklas LGBT Democratic Club.

District 6 supervisor candidate Matt Haney will spend Election Night at the Calle-11sf nightclub, 1501 Folsom Street. His party will run from 8:30 p.m. to 2 a.m.

Supporters of Proposition C, the ballot measure that will tax large corporations in order to fund an array of homeless services in San Francisco, will gather from 8 p.m. until midnight at the club Roccapulco, 3140 Mission Street.