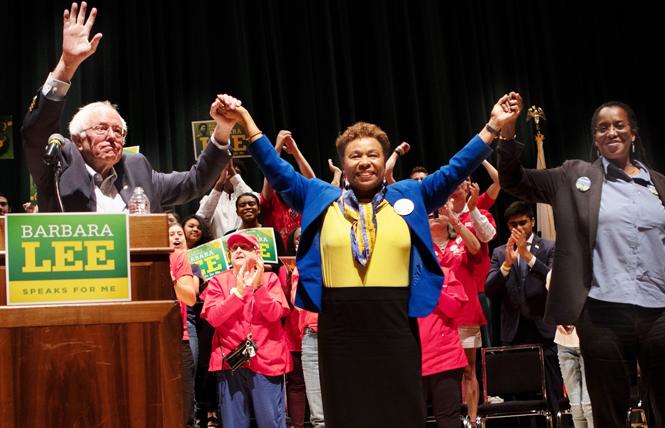 A high-profile endorsement and encouraging poll numbers are buoying the bid of a Bay Area lesbian Assembly candidate headed into the final weekend of campaigning before the November 6 election.

In the contest for the 15th Assembly District seat stretching from Richmond south to Oakland, Richmond City Councilwoman Jovanka Beckles is aiming to be the first LGBT state lawmaker elected from the East Bay. She is running against former Obama administration official Buffy Wicks to succeed Assemblyman Tony Thurmond (D-Richmond), who is running to be elected state superintendent of public instruction.

Monday U.S. Senator Bernie Sanders (I-Vermont) endorsed Beckles two days after failing to do so during a rally in Berkeley where the two progressive politicians shared a stage with Congresswoman Barbara Lee (D-Oakland), who had earlier endorsed Beckles. The lack of an endorsement at the event led to a local website reporting that Beckles had gotten "Berned" by Sanders, widely expected to again seek being the Democratic Party's presidential nominee in 2020 after falling short in 2016.

"While in Berkeley, I had the chance to meet with Jovanka Beckles, and I was impressed by her commitment to progressive values," Sanders was quoted as saying in the statement. "In the state Assembly, she will fight for Medicare for all, a living wage for all California workers, environmental justice and criminal justice reform. I'm proud to support Jovanka Beckles in the 15th Assembly district."

In an email sent hours later to her supporters, Beckles said she was "honored" to have Sanders' backing in the race.

"The political revolution that Bernie Sanders started with his 2016 presidential run is OURS," wrote Beckles. "With just over a week left until Election Day, NOW is the time for action! It's time to take back our country—for people, not profit!"

Late Tuesday, Service Employees International Union Local 1021, which is backing Beckles, highlighted a new tracking poll by EMC Research that showed Beckles leading Wicks 43 percent to 39 percent, with just under a fifth of voters still undecided. The combined telephone and email-to-web survey among 400 likely voters was conducted October 25-29, prior to the Sanders endorsement, and has a margin of error of ±4.9 percentage points.

According to the poll, Beckles is leading among women voters 47 percent to 35 percent and with No Party Preference voters (46 percent to 33 percent). The poll also found that voters of color (49 percent to 36 percent) also favor Beckles, who was born in Panama and is both black and Latina. If elected, she would be the state's first black LGBT lawmaker.

Wicks has turned to her former colleagues in the Obama White House to help boost her chances in the race. Last Wednesday, Obama senior adviser Valerie Jarrett emailed Wicks supporters in praise of her candidacy.

"Buffy is a person who works relentlessly hard, never gives up, and is motivated by the right reasons — to help create positive, progressive change for all of us," wrote Jarrett. "This is also why I hired her to work for me in the White House. And it was here that I got the to chance to really see how effective she is. Buffy has the unique ability to bring people together and push for tangible results. She is the type of leader we need, especially given the times we are in."

The race between the two female candidates is one of the most expensive legislative races in the state, according to campaign finance data compiled by Rob Pyers, senior researcher for the nonpartisan California Target Book, which tracks the state's elections. Already, $1,2 million has flowed into the contest where both candidates have touted they are not taking corporate money.

As first reported by Politico, Wicks has benefited from $840,000 in outside spending, chiefly from the Coalition for East Bay Health Care Access, a group funded by education reform group EdVoice, CA YIMBY, the CA Medical Association, and the CA Dental Association. Beckles, meanwhile, has received support from East Bay Working Families, an IE funded by SEIU, which has spent $317,000 supporting Beckles and another $7,400 opposing Wicks, noted the political news site.