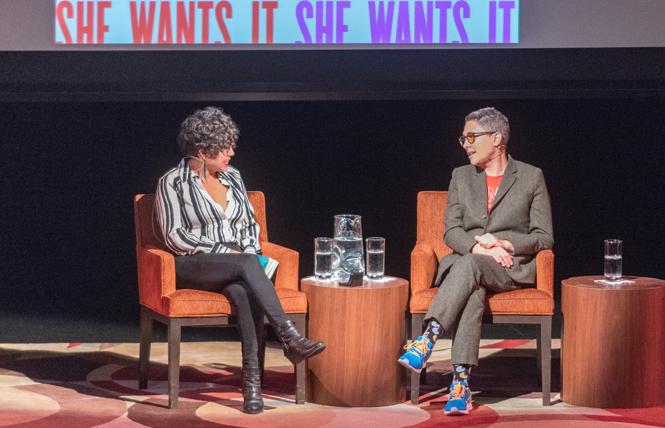 The series, which premiered in 2014, is a comedy drama about a Los Angeles family and their lives following the discovery that the person they knew as their father, Mort (played by actor Jeffrey Tambor), is a transgender woman. It was the first show produced by Amazon to win a major award, and the first produced by a streaming media service to win a Golden Globe for best TV series.

But Soloway, a 53-year-old Los Angeles activist, writer, and filmmaker who identifies as nonbinary, or genderqueer, has ambitious plans.

When Soloway, who prefers gender-neutral pronouns, finishes their nationwide tour to promote their recently released book, "She Wants It: Desire, Power, and Toppling the Patriarchy," and wraps up shooting the final episode of "Transparent," "I have a ton of projects" in the works, they said in a recent telephone interview with the Bay Area Reporter.

"A Broadway musical, new TV shows, and a book imprint," Soloway ticked off when asked for specifics.

For now, they are having a "great time" on the three-week book tour, accompanied by assorted colleagues, friends, and relatives at each stop. The book describes Soloway's personal and professional journey after her parent came out as transgender and when Soloway began to erase the lines on their own gender map, deciding they were most comfortable with identifying as nonbinary.

Soloway noted that the book sales have been "excellent" (as this article went to press, the 241-page memoir hit number one on Amazon's best seller list in the "theatre/biographies" section) and a New York Times book review called its storyline "fascinating" and said that Soloway's "deeply considered and honestly depicted quest for an authentic self ... gives this memoir its depth."

In San Francisco, where Soloway had two appearances last week, they wowed the crowd at the Jewish Community Center by offering the audience the first sneak preview of two recently completed songs that will be part of the final episode of "Transparent." Her sister Faith Soloway, a lesbian who was a writer on the show, was on keyboard, and Amy Landecker, a co-star of the series, sang both numbers.

Clearly, the show's cancellation was painful to everyone in the cast, Soloway said.

"But everything happens for a reason," they added.

The apparent reason behind the cancellation was a bitter dispute among cast members, two of whom complained that Tambor had harassed them. (He has denied the allegations.) Soloway, a founding member of both #TimesUp and #5050by2020, campaigns to eliminate sexual misbehavior and gender inequity in the workplace, was caught between a rock and a hard place.

While Soloway was trying to see if there would be a way to save the show, Amazon fired Tambor and announced that the show would be canceled, agreeing to allow the series a final season, consisting of a single episode, a movie musical. The episode is scheduled to air "sometime in 2019," according to Amazon.

By that time, Soloway had already been thinking that "Transparent" could be adopted into a musical and is "in negotiations" with several off-Broadway producers, hoping to take it to Broadway next.

"So it's not like 'Transparent' is ending. I'd say it was transitioning," Soloway said.

More projects planned
That's hardly all that is on Soloway's plate.

Soloway's production company, Topple, which has created both "Transparent" and another Amazon series, "I Love Dick," also has eight TV shows and four features under development at Amazon Studios.

And Amazon's nine-year-old publishing arm has created a Topple book imprint, naming Soloway editor at large with the task of leading the charge to publish "revolutionary feminist voices."

Soloway was hardly an unknown in Hollywood before creating "Transparent." They had already been a successful writer and producer for shows like "Six Feet Under" and "United States of Tara." Soloway's first feature film, "Afternoon Delight," won the 2013 directing award at the Sundance Film Festival.

But when it came to pitching their own shows, "I kept bumping up against a glass ceiling," Soloway said.

While Soloway is grateful for the fame and fortune that they have earned as an artist and producer, "real power" is not on the horizon, they said.

"Take the entire budget of 'Transparent' and all the people we've paid" for the past four years, Soloway said. "In total, we don't even make up for one leg of one baseball player. That's reality."

"In society as a whole, and definitely in Hollywood, the queers are still very much the 'others.' It's not a glass ceiling, it's pure concrete," Soloway said.