After SF Pride board term, Meow plots next moves 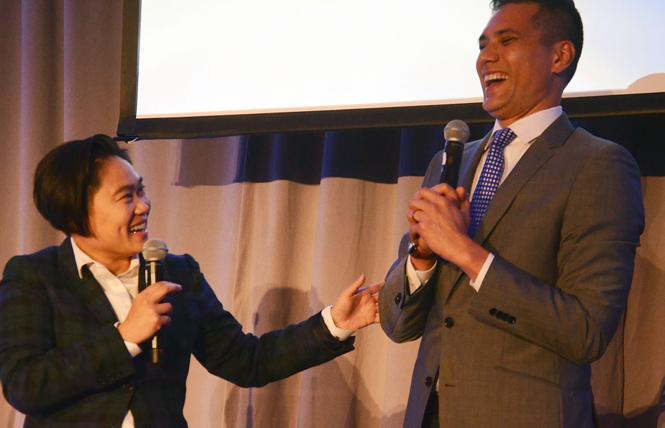 Community activist and TV host Michelle Meow has her eye on other projects now that she has stepped down as president of the San Francisco Pride board, a position she had held since 2016.

The board that oversees the San Francisco LGBT Pride Celebration Committee is expected to elect a new president November 7. Currently, treasurer Jacquelene Bishop is serving as interim president. Meow, a lesbian, also left the board, as her term was up.

At the recent annual gala for PRC, which helps people in San Francisco affected by HIV/AIDS, substance abuse, or mental health issues, Meow shared co-hosting duties with out ABC-TV news anchor Reggie Aqui. For Meow, it was all in a day's work.

"The Positive Resource Center is a longtime organization that has evolved to become one of the leading organizations that provides direct services to our HIV/AIDS community," Meow told the Bay Area Reporter as the evening got underway. "Although San Francisco prides itself in becoming a getting to zero city, meaning zero new infections, there are societal issues such as homelessness, unemployment, mental health, and even racism that prevent some of the most marginalized in our community from getting the services that they need. So supporting PRC is a must to keep our community healthy."

Honorees at the October 12 gala included Vanguard Leadership Award recipient Craig Miller, who was recognized for his AIDS advocacy work dating back to 1984, which included creating the AIDS Walks in San Francisco, New York, and Los Angeles. Kaiser Permanente received the Keystone Service Award for its many decades as a leader in health care.

Though she wasn't an awardee, Meow received a thunderous applause when she took to the stage.

"It's an honor to be here to support the Positive Resource Center," Meow told the audience at the Four Seasons Hotel. "Tonight really means something magical in these challenging times when leaders move funds around from HIV to detention centers. But we're resilient and we're going to show the administration that we're not breaking down."

She was referring to news reports that the Trump administration moved as much as $266 million from HIV and cancer funds to detain immigrant children.

"I served five cycles of Pride, four on the board," Meow told the B.A.R. after the gala. "I had been appointed and, at the time, been recruited by then-board President Gary Virginia and Vice President Marsha Levine."

Meow, 36, feels that Virginia stepped in to serve on the board in 2014 in order to restore trust and faith in the Pride organization after a very contentious period the year prior, which included harsh criticism of SF Pride after the board rescinded a grand marshal honor to Chelsea Manning, who at the time was facing a court-martial for leaking government documents to WikiLeaks. (Manning was convicted, served several years in a military prison, and had her sentence commuted by President Barack Obama just before he left office.)

"When he passed the baton on to me in 2016, we had already hired an executive director who had years of successful experience of event organizing, and that was George Ridgely," Meow said. "I believe I stepped into the role for a specific reason as well, and that was to defend and protect the organization, while continuing to restore the faith and trust of the community."

Virginia and Donna Sachet received the Sylvester Community Pillar Award at the PRC gala for their work organizing a Pride brunch benefit that has raised thousands of dollars for PRC.

For his part, Virginia said that Meow's leadership skills were a great fit for SF Pride.

"After five years of service, Michelle's proven herself to be that rare board member who leads by example, delivers on fundraising responsibilities, balances governance with working roles, is a tireless networking expert, and is passionate about the agency's mission," Virginia wrote in an email. "While much of her success was in the public eye, there was an equal amount of difficult work behind the scenes as she helped manage public relations, worked with activists, negotiated with corporations, saved parade TV coverage, secured major funding, and more. She was the perfect leader at the right time to move the agency forward."

Challenges
During her three years as board president, the organization faced many challenges and legal hurdles, including several lawsuits related to shootings near the festival in 2013 and 2015. At least one of the cases has settled.

"It comes as no surprise to our community that my time at San Francisco Pride could be defined by the legal cases we fought, not to mention the growing concerns of our communities as our political environment changed," Meow said. "With that being said, overcoming those major hurdles and supporting George's efforts to sustain the organization is a big, big victory. I hang up my hat knowing there's a contingency plan, a reserve account with funds for the future, a diverse board with more women, people of color, and trans/nonbinary/queer-identified people who support our current executive director, and a growing staff that includes another familiar name in event organizing, our communications director Fred Lopez."

In an email sent through Lopez, Ridgely praised Meow's tenure.

"For more than a decade she has co-anchored our annual parade broadcast, and for the past five years on the Pride board, she has demonstrated a deep understanding of the importance of her role as a steward and champion for this important institution that has impacted millions of people," Ridgely wrote.

He added that working alongside Meow "has been the highlight of my tenure as executive director."

Meow, 36, spoke of why she chose to step down from Pride. Her reasons include a new wife, Orawan Chanpanya, her weekly television show, which airs Sunday nights on KBCW TV, and a sense that it's someone else's turn.

"I think it's healthy to pass the baton and give other members of our community an opportunity at leading and serving," she said. "The major professional reason is that I fell madly, deeply, and profoundly in love with someone from a different country. Navigating the documentation process as a new queer immigrant family during this administration is one of the most challenging things I've ever done. I need time and mental space for that."

Meow also hosts a daily radio program on the Progressive Voices Network that airs Monday-Friday from 4 to 5 pm. Like her TV show, the radio show is interview format.

"The radio show allows me to spend a lot more time discussing the issues and the subject," she said. "Both shows focus on LGBTQ inclusion but topics are heavily focused on internationality and social justice issues. I hope people have a better understanding of how the decisions we make, the policies we write, the culture we create, the systems we live in today, all of it has to change in order to fit in equality for all. We are all interconnected and yes, all people matter but Black Lives Matter too, and so on."

Additionally, Meow hosts programs at the Commonwealth Club in which she invites LGBT thought leaders to engage in discussions with an intersectional approach. The current focus of the talks is immigration, though there will also be an upcoming talk commemorating the 40th anniversary of the defeat of Proposition 6 — the Briggs initiative — a 1978 ballot initiative that sought to prevent LGBT people from working in California public schools.

"I am also working on a startup nonprofit organization focused on immigration issues such as the legal and social pitfalls of our immigration policies," Meow said. "I hope that our actions will lead to the social and cultural shift needed in order to really make change and pass policies for healthy reform."

Meow promises that there will soon be an announcement regarding this new venture.

"The last thing I will say is, being seen as a leader, being part of an organization that has meaning to everyone, doesn't mean that you no longer belong to yourself," Meow said. "It doesn't mean that we stop treating each other with kindness and fairness. We are all responsible for ourselves and our actions. Everyone in our community deserves compassion. There were times I felt isolated, alone, trapped by the words of our liberalism as a platform, but without the action and care I needed as a single individual human being. I hope we do better at caring for one another."