Commentary: Resist: We f*cking warned you 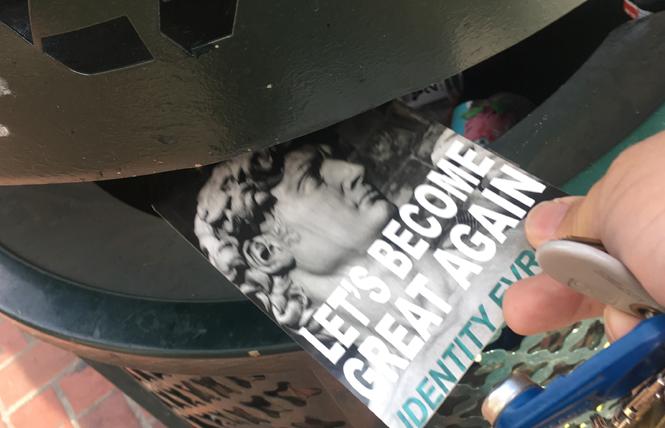 A flyer from the white supremacist group Identity Evropa posted directly across from Twitter's Market Street headquarters is trashed Sunday, October 28, a day after what the Anti-Defamation League called the bloodiest attack on Jews in American history took place in Pittsburgh, Pennsylvania. Photo: Christina A. DiEdoardo

In a week that began with the leak of the regime's plan to regulate trans and nonbinary Americans out of existence, continued with mail bombs being sent to two former presidents and a host of others critical of President Donald Trump, and that ended with the massacre of black people in Louisville, Kentucky and Jews in Pittsburgh by armed bigots, one sentence stays in my mind.

We fucking warned you this was coming.

That's not written to smugly indicate schadenfreude. It is, rather, screamed out of frustration and anger, because the lives we lost last week might have been saved if those whom the regime hasn't gotten around to targeting yet paid greater attention to what those already in the crosshairs have been saying for more than a year.

They largely haven't, because what front-line activists have to say in this regard usually isn't pleasant. I see the looks on some of my liberal friends' faces when I tell them what it's like to stare into the eyes of actual Nazis across a field from you in real time. I see them get uncomfortable when I tell them how fascists yelled, "Heil Trump!" in the streets of Berkeley, how they carried signs that read "The Goyim know!" and pelted us with bagels, both of which were intended as anti-Semitic gestures. I see them scuttle like crabs when I tell them about the graphic death threats I and other activists get — from photoshopped pictures of gas chambers to explicit threats to run us over with cars to much, much worse.

None of that is pleasant to hear, much less process. It's much easier for many to take mental refuge in fantasies that the fascists aren't really serious; that the scary-looking antifascists in the black hoodies and bandanas are worse than the crowd that deck themselves out in the American flag and claim "patriotism" means throwing those who don't agree with you out of helicopters. Maybe you even pretend to yourself that not taking a side is somehow the intellectual or more enlightened position and serves some higher good.

Sadly, that sort of intellectual laziness leads directly to people being killed, as we saw this week. Both the alleged mail bomber and the Louisville shooter had a history of posting threats on social media, according to multiple published reports. Of course, in both cases, nothing was done about it until they moved ahead with their plans.

It doesn't need to be this way. A coalition led by Oakland activists like mayoral candidate Cat Brooks and Tur-Ha Ak of the Community Ready Corps kept the Proud Boys away from Make Westing in late July. Thanks to the continuing efforts of Berkeley Antifa and the Black Bloc since 2017, fascist organizers in the East Bay have publicly stated they can't organize a march unless they can convince some band of out-of-town fash to act as "security." In both these examples, community members from a variety of backgrounds came together to make it clear to even the most oblivious fascist that they weren't welcome in our area. Refuse Fascism and By Any Means Necessary have also done yeoman work — especially during the Fifth Battle of Berkeley in August, where they held the line against the enemy in Civic Center/Martin Luther King Jr. park virtually alone thanks to the Berkeley Police Department's decision to block entry to the park by anyone who wasn't a fascist.

Surely, now that a week like this has removed all remaining doubts as to what the regime and its supporters have in mind for the rest of us, there's no reason why groups that have been sitting on the sidelines should continue to do so other than cowardice.

Pick a damn side and join the groups listed above on the front lines. If you're not out there with those of us standing up to bigots and racists, you're enabling their murderous mayhem.

No new cops, no new jails
Chanting "No New Cops! No New Jails!" about 150 people assembled at the steps of San Francisco City Hall Monday, October 22, to demand the closure of the city's current jail facility at 850 Bryant Street. The action was organized by the No New SF Jail Coalition, Critical Resistance Oakland, Coleman Advocates and the TGI Justice Project.

"I think about the psychological and emotional and physical violence that happens to trans people in jails and prisons and how the jails are disproportionately housed with black and brown bodies," said Janetta Johnson, executive director of TGI Justice Project. "I think about the corrupt police officers who are sitting in there having the racist discussions and the degradation that is perpetuated against our folks.

"We need to stand in solidarity and continue to fight for no new jail in San Francisco," she said.

Unfortunately, city policy is being pulled in contradictory directions. On one hand, District Attorney George Gascón has long opposed the construction of a new jail to replace the one at the Hall of Justice and supported measures to reduce the city's jail population. These include efforts to increase the number of beds at "locked" facilities other than the jail at the county level for prisoners with mental health issues, creating several thousand units of affordable housing, and increasing funding for inpatient addiction services.

On the other hand, a new San Francisco Police Department effort to cite and arrest the homeless for sleeping in public seems destined to increase the number of detainees at the jail, given the extensive wait lists for city shelters. However, the SFPD's approach took two hits in October when Gascón, relying on a decision from the 9th U.S. Circuit Court of Appeals, suspended prosecution of those citations, which was followed shortly thereafter by a San Francisco Superior Court judge throwing many of them out at the request of the San Francisco Public Defender's office.

That said, given Mayor London Breed's decision to prioritize the clearing of homeless encampments and the current lack of a place for residents of those encampments to go, opponents of a new jail are far from tranquil.

The day after (the midterms)
Regardless of the outcome of the midterms, at 5:30 p.m. Wednesday, November 7, Refuse Fascism will conduct an action at San Francisco City Hall to demand the removal of the Trump-Pence regime. All (except fash, of course) are welcome.