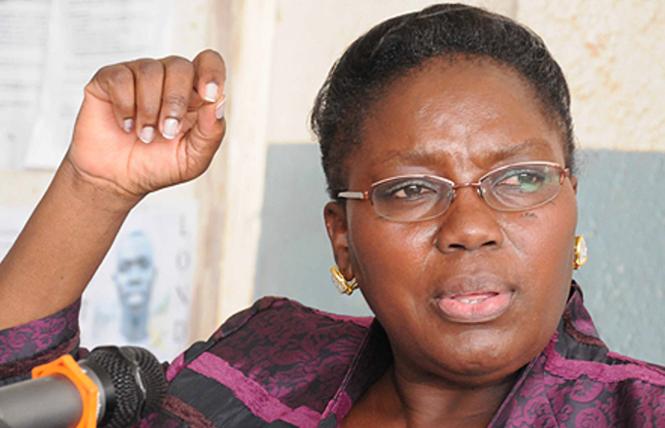 Uganda and Lebanon's parliamentary speakers Rebecca Kadaga and Nabih Berri declared victory after leading the charge October 18 to ban discussions about LGBT issues at the Inter-Parliamentary Union in Geneva, Switzerland.

There were 120 parliamentary members who abstained.

The IPU is an annual gathering of democratic parliaments and assemblies from around the world to discuss global political issues and make recommendations for actions.

The vote blocked the Standing Committee on Democracy and Human Rights, led by delegates from Canada and Belgium, from bringing the agenda item before next year's IPU General Assembly.

The resolution in question was titled, "The role of Parliaments in ending discrimination based on sexual orientation and gender identity and ensuring respect for the human rights of LGBT persons."

Anti-gay elation
Kadaga appeared triumphant following the vote, vowing to reporters that she would continue to fight against what she considers "uncivilized and un-Christian behaviors," she said.

"I am so happy that this battle has finally been won," she said.

Kadaga noted her long struggle against LGBT rights at the IPU, starting with what she called pro-LGBT rights nations attempting to "smuggle" sexual orientation and gender identity issues onto the agenda in St. Petersburg, Russia.

In March, she threatened to walk out of the IPU General Assembly meeting when LGBT rights were raised.

"Today, we have made a final vote that will prohibit the issue of LGBT from appearing on the IPU agenda," Kadaga said.

"We shall continue to fight the LGBT issues on the international level until people here appreciate that same-sex is inhuman and anti-culture," he told the Observer.

Latif Ssebaggala, of Kawempe North in Uganda, was emboldened to bring the Anti-Homosexuality Bill back before the Ugandan Parliament, he said.

"The decision taken today has made me so strong and as I return from Geneva, I am prepared to awaken our gay law that was nullified by court," he said.

The Ugandan delegation, led by Kadaga, claimed it detected a "well-orchestrated machination" proposal for the IPU General Assembly agenda led by pro-LGBT delegates from Belgium and Canada.

She opposed the proposed item and accused delegates from Belgium and Canada of sneaking a pro-gay item onto the agenda as an "emergency item," according to media reports.

In response to the allegations, Gabriela Cuevas Barron, president of the IPU, proposed that members campaign and lobby, leading up to a vote on the question if the assembly could change the agenda and work plan of standing committees.

The question presented was whether the standing committee could hold a panel debate that would lead to the LGBT resolution.

Members would respect the outcome of the vote and no other motion would be allowed on the floor, she directed the delegates.

It was the fuel Kadaga needed to rally anti-gay nations' representatives from Africa, Asia, the Middle East, and Russia to vote against the pro-LGBT item.

Edwin Sesange, director of the London-based African Equality Foundation, objected and raised alarm on the outcome of the vote.

"I'm concerned with how an institution of that magnitude can be influenced with hatred," he told Gay Star News, praising delegates who voted against Kadaga's motion.

He said that its success was worrying.

"The world cannot allow to be silenced by some members of parliament who are driven by hatred, torture, discrimination, and persecution of innocent LGBTI people," he said, fearing for the institution's reputation. "This level of hatred toward the LGBTI community might bring the all institution of international parliament unions into disrepute."

Michael Waters, the Democratic Alliance party member of parliament who was a part of the South African delegation, called the vote "a very sad day for human rights" on Facebook, reported 76 Crimes.

Sesange called for the IPU to "review their decision and promote love for all instead of hatred."

The groundbreaking Comprehensive Law for Trans People grants transgender Uruguayans legal recognition and the right to fully exercise their rights.

The new law allows transgender individuals to self-identify, change government-issued identification documents without a judge, and obtain government-supported sex reassignment surgery and hormone therapy treatments, including for transgender youth under the age of 18 with their parent's consent.

It goes further than other transgender rights bills. Transgender Uruguayans will also receive an earmarked percentage of private and public educational scholarships and a monthly pension for transgender people born before December 31, 1975, retroactively effective as of January 1 of this year, among other items.

The pension is to make up for individuals persecuted during Uruguay's military dictatorship from 1973 to 1985, according to media reports.

The Broad Front, which has been in power since 2005, crafted the law and promoted it, according to Telesur.

The Broad Front is the country's left-wing coalition of political parties made up of trade unions and housing movement leaders.

The new law is effective immediately.