Jury convicts Phillips on all charges in murder of friend 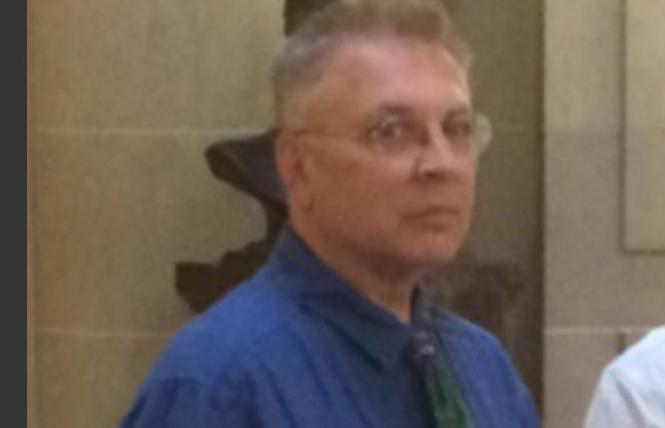 Gay man Michael Phillips was found guilty of first-degree murder and every offense he was charged with by a San Francisco Superior Court jury Thursday, October 18.

Phillips cried loudly as the guilty verdict for killing his friend of many years, 75-year-old James Sheahan, was read.

Sheahan's body was found in his bloodstained Nob Hill apartment August 14, 2017, and Phillips was arrested that November in connection with the death. Phillips, 65, pleaded not guilty in April to murder, robbery, and other charges related to the death of Sheahan, who was also gay.

The jury deliberated for about two days before the verdict was read to Superior Court Judge Loretta Giorgi. Phillips was also found guilty of aggravated mayhem, first-degree burglary and robbery, first-degree residential burglary, theft or forgery or fraud of an elder, and theft of an access card. Additionally, he was convicted of fraud for financial documents.

During the trial, Assistant District Attorney O'Bryan Kenney argued Phillips brutally killed Sheahan with a cordless phone then cut his wrist to make it look like a suicide before stealing thousands of dollars from him, including paintings, forged checks, and attempted cash withdrawals with Sheahan's ATM card. Sheahan had Stage 4 lung cancer in the months leading up to his death. Witnesses testified that Sheahan died from multiple traumatic injuries to the head caused by blunt force trauma.

"This man will be held accountable due to the thoughtful and thorough investigation of the San Francisco Police Department, led by Sergeant Domenico Discenza," said Kenney in a news release. "Mr. Sheahan and his family will have justice because of their tireless efforts."

Kenney told the jury that the motive for the killing was Phillips' desperate love for a Filipino man, Archie Arcaya Fuscablo, and Phillips' need to funnel money to Fuscablo to get him to the United States. As previously reported by the Bay Area Reporter, the two met online and married at City Hall October 30, 2017, just weeks after Fuscablo arrived in the U.S. and two months after Sheahan's death.

"He killed a man he knew for years and he did it for one motive," Kenney said during his closing argument last week. "He had a desperate need to get money to bring a man here he wanted to be with and would stop at nothing to do that."

Deputy Public Defender Kwixuan Maloof focused on the lack of forensic evidence connecting Phillips to the murder throughout the trial and contended that someone else committed the killing and other charges against Phillips.

Phillips' DNA was not found in the apartment or on Sheahan's belongings. There were instances of DNA from an undetermined source found on particular items in question, including yellow rubber gloves and a lighter, a medical examiner testified during the trial.

"I am quite surprised at the verdict given the enormous scientific evidence in this case that someone else was involved," Maloof told the B.A.R. "It wasn't just one or two items that were questionable. Every single item tested pretty much pointed to someone else's involvement and Mike's innocence."

Maloof also argued during the trial that Sheahan died after Phillips was last seen exiting the apartment, as one medical examiner testified that the body was warm to the touch on August 14, when Sheahan was found.

Maloof said he felt the prosecution's evidence was weak and circumstantial. He plans to file a motion for a new trial.

As reported online last week, a member of the jury also spoke with the B.A.R. moments after the verdict was read. Paul Smith, 55, said, "the evidence was overwhelming for the prosecution." When asked what the most incriminating evidence was he replied, "The video of the blood stains on [Phillips'] pants."

Kenney showed surveillance video during the trial that showed the defendant entering and exiting Sheahan's Bush Street apartment multiple times the weekend before authorities found his body. Two separate blood stains appeared on Phillips' pants after he entered the apartment. Sheahan's blood was also found on the inside of a black and red Trader Joe's bag that he was carrying with him going in and out of the apartment.

Smith also said he was heavily swayed by the evidence that described how the defendant stole thousands of dollars and other belongings from Sheahan. The jury also saw surveillance video from a Wells Fargo ATM that showed Phillips went to two ATMs and attempted to withdraw cash with Sheahan's ATM Friday, August 11.

A sentencing date for Phillips has not been announced.