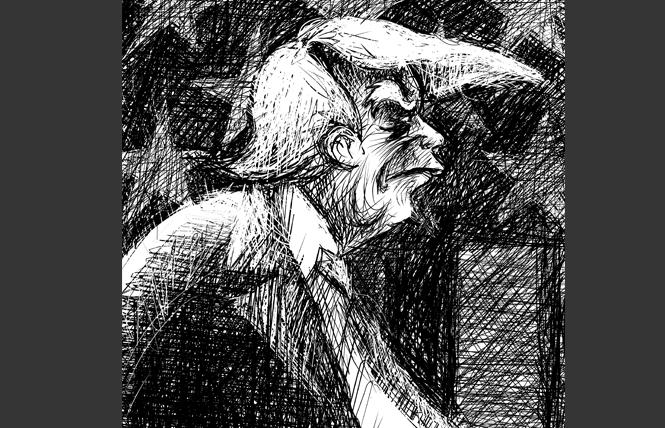 Bleary-eyed, as the first streams of dawn's light appeared on the horizon, I checked in on my phone. It's a sort of daily ritual that I suspect I share with a large part of the world, as I try to get a sense of what's changed overnight by friendly voices I trust.

It wasn't that much of a surprise that the news would be bad. After months of headlines about immigrant children being detained in cages, the constant erosion of rights, and so on, that's almost to be expected, like the relentless dull thud of a jackhammer breaking up concrete.

Sunday, however, the news was aimed squarely at me and my ilk.

The New York Times reported on a memo that the Department of Health and Human Services has been circulating since the spring. HHS has found that a "lack of clarity" over the issue of gender was causing it problems, and had suggested a solution for the entire Trump administration: Simply get rid of transgender people entirely.

According to the Times, HHS wants to define sex in a very narrow way, as "either male or female, unchangeable, and determined by the genitals that a person is born with."

HHS is calling on this change not only for its own department, but within the Departments of Education, Justice, and Labor as well.

Such a move would make it more likely that the courts wouldn't agree to any challenge to this, a move made more possible by the administration's persistence in appointing conservative judges at all levels of the judiciary.

Apparently, to determine a person's genitals, the administration will use one's birth certificate "as originally issued." The only authority it is accepting beyond that is "genetic evidence."

I don't need to go too deeply into how flawed the notion of using "XX and XY" chromosomes as a final arbiter is, especially in a world where there are dozens of other sex chromosome variables that come into play, and where issues of sex and gender are not so easily specified.

Such a policy would be nothing short of devastating for transgender people. It would strip away our identities as men, women, or nonbinary; would invalidate the birth certificates of many; and would open the door to barring transgender people at any level of the government. It would also likely fuel further moves against us by private entities, barring us from seeking goods and services with little remedy.

Of course, this goes further than just transgender and gender-nonconforming people. Intersex people would also be trapped within the morass of such a policy.

HHS also aims at gay, lesbian, and bisexual people in this memo: while arguing about the definition of sex, it has stipulated that the term was never meant to include gender identity or sexual orientation.

In short, once the administration opens the door by removing transgender people and our rights, it can use this as a template for going after the rights of others.

Why do I believe this? It's simple. In arguing about this supposedly overly broad definition of sex and its alleged "lack of clarity," the Obama administration was able to "wrongfully extend civil rights protections to people who should not have them," the Times reported.

Read that quote one more time.

Now, to me, civil rights are afforded to everyone. They are there to protect all people from unfair treatment, and to secure a level playing field for all people. In the Declaration of Independence that led to the formation of this country, these were those "certain unalienable rights" mentioned.

Unalienable rights, by the way, are ones that cannot be taken away — which is exactly what HHS under the Trump administration is proposing. This is a core failing of our government to protect its people.

As I said, this is not a shock. In the America of the Trump years, we separate families seeking a new life in America. This, in a country that once rallied around a statue dedicated to liberty that greeted immigrants at Ellis Island.

Yet, I don't find myself slipping into a jaded despair, seeing this continual erosion of all we at least claim to hold dear in this country. I am simply unwilling to give up.

I'm not going to just tell you to go out and vote on November 6. Yes, you should, and we should do all we can to fight our way to the ballot box this year. I think it's a given that we need to use that power while many of us still have it.

That said, we need to be ready to go past this. We need to stand up and protest, and get in good trouble to secure our rights no matter what this government seeks to do.

The rights of transgender people are but one step along the path, much like the travel ban and family separations. This isn't yet an endgame, and there are still plenty of horrible things the administration may yet be willing to do.

I've been warning about steps just like this since before the 2016 election. I feel like I have shouted myself hoarse trying to warn over the last two and a half years that this could — and would — be coming.

Here it is. Here is where the transgender community and its allies must, at last, stand up.

Gwen Smith will not have her existence legislated. You can find her at www.gwensmith.com.